Freddie Mercury was the lead vocalist of the rock band Queen. 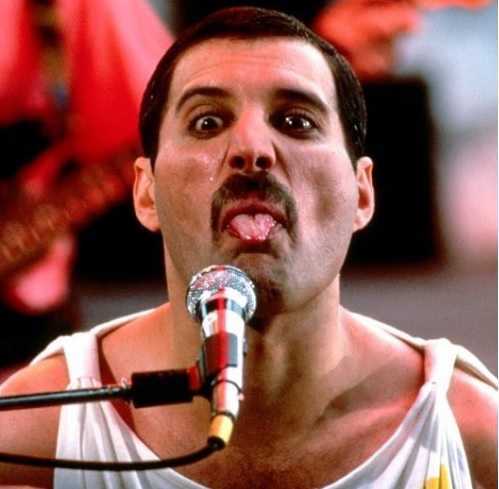 One of the famous British singers is Freddie Mercury, a lead vocalist of the rock band Queen. He is also the songwriter and a record producer. His real name is Farrokh Bulsara. He is consistently voted one of the greatest singers in the history of popular music. One of his world-famous songs is “Bohemian Rhapsody”, which is used as a title for his biopic movie released in October 2018. His other hits were “Somebody to Love”, “Don’t Stop Me Now”, “Crazy Little Thing Called Love”, “We Will Rock You”, and “We Are the Champions”. Queen’s performance at the 1985 Live Aid concert has been ranked among the greatest in the rock history. Freddie Mercury died at the age of 45 in 1991, due to complications from AIDS.

A biopic about English rock band Queen, and their lead vocalist Freddie Mercury was released in October 2018. The movie is titled Bohemian Rhapsody, one of the Queen’s greatest songs in the history. The movie starts Rami Malek as Freddie Mercury, Lucy Boynton Ben Hardy, Tom Hollander, Gwilym Lee, Joseph Mazzello, Aidan Gillen, Mike Myers, and Allen Leech. The movie is written by Anthony McCarten and directed by Bryan Singer. The most awaited movie was released in the United Kingdom on 24 October 2018 and in the United States on 2 November 2018.

Freddie Mercury was born with a name Farrokh Bulsara on 5 September 1946 in Stone Town, British protectorate of Zanzibar (now Tanzania). His parents were Bomi and Jer Bulsara. He holds British nationality. He was born is Parsi descent. He was briefly raised in Zanzibar and most of his childhood later in India during British colonization. He practiced the Zoroastrian religion. He had a younger sister named Kashmira. He attended St. Peter’s School and St. Mary’s School in Bombay (now Mumbai). He started stating piano lessons at the age of seven. At the age of 12, Mercury formed a school band named The Hectics. He kept his name Freddie while he was at St. Peter’s School. After Zanzibar Revolution, his family fled to England, where he attended Isleworth Polytechnic. He acquired a diploma in Art and Graphic Design at Ealing Art College.

He started selling second-hand clothes after graduation and also worked as a baggage handler. He joined local bands such as Ibex (later renamed Wreckage) and Sour Milk Sea. Some of the bands he joined did not make an impact on the industry and some of the bands broke up.

In April 1970, Mercury formed a band named “Queen” with guitarist Brian May, drummer Roger Taylor, and a bassist John Deacon. Freddie changed his surname from Bulsara to Mercury.

Queen released their self-titled first album in 1970. “We Will Rock You” and “We Are the Champions” from their second album ‘News of the World’ became most popular at the time.

Queen released A Night at the Opera in 1975. Queens released their album, Made in Heaven in 1995. Other albums by the Queen were innuendo, Sheer Heart Attack, A kind of Magic, Hot Space, Queen II etc Out of Queen’s several albums, the ‘Greatest Hits’ is the best-selling album of all time in the United Kingdom.

His two of the greatest songs, “Bohemian Rhapsody” and “We Are the Champions” has been voted the greatest song of all time in major polls by Guinness World Records and Sony Ericsson and was inducted into the Grammy Hall of Fame.

His video for “Bohemian Rhapsody” was voted the greatest of all time by readers of Q magazine. In 2001, Mercury was inducted into the Rock and Roll Hall of Fame.

In 2003, he was inducted into the Songwriters Hall of Fame. In 2004, he was inducted into the UK Music Hall of Fame. In 2018, the band was awarded Grammy Lifetime Achievement Award. Mercury also pursued his solo career. He has released several singles and released two solo albums titled Mr. Bad Guy in 1985 and Barcelona in 1988. Mercury has also worked with Michael Jackson, Montserrat Caballe, Fred Mandel, Morgan Fisher, and Miker Moran.

Freddie Mercury one of the best live performers of all time. He has performed around 700 concerts with Queen across the globe. He is known for his theatrical style that can increase the participation of the stadium audiences towards him throughout his performances. His performance at Live Aid in 1985 is concluded as the greatest live performance in the history of rock music.

during the early 1970s, Mercury had a long-term relationship with Mary Austin. The lived together for several years. However, Mercury started an affair with a man. Mercury told Austin of his sexuality. The couple remained as a close friend since then. Mercury always referred to Austin as his only true friend. Mercury was also linked with an Austrian actress, Barbara Valentin. However, they both denied the rumors. Mercury then dated German restaurateur Winfried Kirchberger. Mercury was also linked with Radio DJ Kenny Everett in mid-1970s. Despite the homosexuality, they both claimed they were close friends.

According to British Press, Freddie Mercury was tested positive HIV-positive in 1986. Many news media, journalists, and reporters followed Mercury to get the facts about his disease. Mercury always denied the news and claimed to have tested negative for HIV. Later, his partner Jim Hutton stated that Mercury was diagnosed with AIDS in late April 1987. His health condition worsened day by day. Freddie retired from music after finishing his final work with Queen in 1991. Mercury made an official statement on 23 November 1991 about AIDS he was diagnosed with and his health conditions,

“Following the enormous conjecture in the press over the last two weeks, I wish to confirm that I have been tested HIV positive and have AIDS. I felt it correct to keep this information private to date to protect the privacy of those around me. However, the time has come now for my friends and fans around the world to know the truth and I hope that everyone will join with me, my doctors and all those worldwide in the fight against this terrible disease. My privacy has always been very special to me and I am famous for my lack of interviews. Please understand this policy will continue.”

A day after his public statement was released, Freddie Mercury died at the age of 45 on 24 November 1991. The official cause of death was bronchial pneumonia resulting from AIDS.

Our contents are created by fans, if you have any problems of Freddie Mercury Net Worth, Salary, Relationship Status, Married Date, Age, Height, Ethnicity, Nationality, Weight, mail us at [email protected]