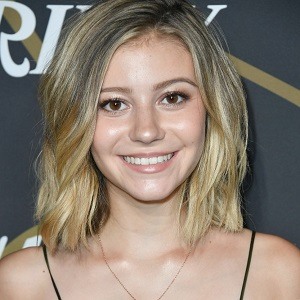 G Hannelius is an actress, YouTuber, and singer. She is best known for her work in the Air Buddies Film series and her appearance in different popular TV series such as American Vandal, Timeline, Dog with a Blog, etc.

Where was G Hannelius born?

G Hannelius was born Genevieve Knight Hannelius, on December 22, 1998, in Boston, Massachusetts, US. As of 2020, her age is 21. Her zodiac sign is Capricorn. She was born to a Swedish father named, Paul Hannelius and a mother, Kathy Hannerlius. She also has a sibling sister, Michelle Knight Hannelius.

Talking about her education, in 2017 May, she graduated from Sierra Canyon High School, located in Los Angeles. She is also one of the students of Los Angeles based Young Studio.

How did G Hannelius Pursue her Career?

G Hannelius always had a keen interest in the acting and entertaining sector. She started to perform in theatres at the age of eight. She hooked with the Children’s Theater of Maine’s Production and Maine State Music Theater. From where she gets an opportunity to act in a play and learn more things.

In 2009, she debuted in the TV Series, ‘Surviving Suburbia‘, where she portrayed the recurring role as Courtney Patterson. She also appeared other several series that year.

She featured as a voice actor in several series of the Disney Air Buddies Series such as Spooky Buddies, Treasure Buddies, and Super Buddies. From 2012 to 2015, she appeared in the Disney comedy TV Series, Dog with a Blog. in which she portrayed the role of Avery Jennings. Later, she had done several recurring roles in different Tv series such as American Vandal, Future-Worm!, and Timeline.

She is a singer and launched various songs on her iTunes account. She also sang a song title ‘Friends Do‘ for the ‘Dog with a Blog Series’.

What about her Youtuber Career?

She has a self-titled Youtube channel. Which already has more than 336 k subscribers. She created this channel on Oct 28, 2011. She started this channel to share her experience and vlogs with her fans and followers. Her popular uploaded video title, ‘Reacting To My Old Disney Shows! | G Hannelius’ and ‘Opening Up about Disney Dog with a Blog’ has more than 2.5 million views.

She stands at a height of 5 feet and 1 inch tall and weight is around 50 kg. She has blonde hair and dark brown eyes.

What is the Net Worth of G Hannelius?

G Hannelius’ net worth is approximately $1 million. She is an American actress and songwriter. So, her average salary is $80 k to $100 k. She is a founder of the company called ‘Make Me Nails’, from where she promotes different nails arts and products.

Is she is active in Social media?

Is G Hannelius in a Relationship?

G Hannelius is in a relationship with Jack Chiate. They have been together since 2015. They really love each other and we can see their photo and hangout images on their social media. He also often appears on the youtube channel of Hannelius.

Our contents are created by fans, if you have any problems of G Hannelius Net Worth, Salary, Relationship Status, Married Date, Age, Height, Ethnicity, Nationality, Weight, mail us at [email protected]