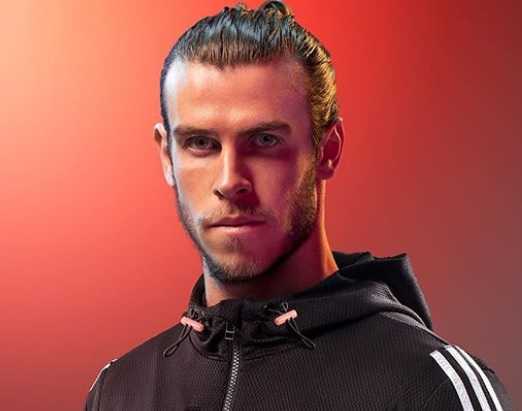 Gareth Frank Bale professionally known as Gareth Bale is a Welsh professional footballer who plays as a left-winger for Spanish club Real Madrid and the Wales National Team. Bale is a left-footed player and has been praised for his tremendous pace, strike from distance and his crossing ability. At present, Bale is considered one of the fastest footballers in the world. Gareth Bale wears shirt number 11 for Real Madrid and Wales National Team. Bale started his professional career from Southampton in 2006. He moved to Tottenham in 2007. Real Madrid signed Bale in September 2013 for 100.8 million Euro, ahead of Cristiano Ronaldo, signed by Real Madrid for a world-record transfer fee of 94 million Euro in 2009. Bale made his international debut for Wales senior team in 2006 as the youngest player of that time. At present, Bale is the highest scorer of all time for Wales scoring 31 international goals in 70 caps. Bale has been named Welsh Footballer of the year for a record six times.

Real Madrid and Welsh star Gareth Bale is set to leave the Spanish club to join Chinese club Jiangsu Suning, where he will be reportedly paid 1 million pounds per week. As Real Madrid signed new players ahead of the new season, Gareth will certainly spend the new campaign on the bench if he doesn’t leave Real Madrid. Last season, Bale faced one of the worst seasons in his career when Real Madrid finished the season with 12 defeats and 68 points in La Liga. Though he scored 14 goals in 42 appearances in all competition last season, it was not enough for him to help the club to win any major championships. Frequent injuries also affected Bale’s performances in later seasons. Injuries kept Bale away from football for months. Real Madrid faced criticism when they faced 3rd in La Liga and they were knocked out of Champions League by Ajax.

Bale who started his career from Southampton at the age of 16 never had to turn back in his career. His impressive performance earned him a deal at Tottenham Hotspur. He joined Real Madrid in a then world-record $100 million deal. With Real Madrid, he won 4 Champions League, one La Liga title, one Copa del Rey, 3 UEFA Super Cups, and 3 Club World Cups.

Gareth Bale was born to a father Frank and a mother Debbie Bale on July 16, 1989, in Cardiff, Wales, United Kingdom. He is the nephew of Chris Pike, former Cardiff City player. Bale attended Eglwys Newydd Primary School at Whitchurch. Bale used to play for Cardiff Civil Service Football Club during his early childhood. Bale was a die heart fan of fellow Welshman and Manchester United player Ryan Giggs. Bale attended Whitchurch High School in Cardiff. Bale trained at Southampton’s satellite academy in Bath. At the age of 16, Bale helped his school’s under-18 team to win the Cardiff & Vale Senior Cup.

At the age of 16 years and 275 days, Bale became the second-youngest player after Theo Walcott to play for Southampton in 2006. Bale established himself as a freekick specialist and won the Carwyn James Award for the BBC Wales Young Sports Personality of the Year in December 2006. Bale was also named Football League Young Player of the Year in 2007. Bale made 45 appearances for Southampton and scored five goals.

Tottenham Hotspur signed Gareth Bale on a four-year deal on May 25, 2007, for a transfer fee of 7 million pounds. Bale made his competitive debut for Tottenham against Manchester United on August 26 and scored his debut goal in his second appearance for the club against Fulham. Bale got injured against Birmingham City on December 2, 2007, and missed the rest of the entire season. Bale returned to active duty towards the end of the 2008-09 season.

After Cristiano Ronaldo’s departure from Real Madrid in mid-2018, Gareth Bale has been given the main duty to win games for the team. Bale was signed by Real Madrid on September 1, 2013, in an undisclosed fee. Documents related to the transfer were leaked by Football Leaks in January 2016, which confirmed a world record transfer fee of 100.8 million Euro.

Bale was eligible to play for England as well through his grandmother. But Bale chose Wales. On May 27, 2006, Gareth Bale made his senior debut for Welsh International against Trinidad and Tobago at the age of 16 years and 314 days becoming the youngest player for Wales. Previously the Lewin Nyatanga held the record. Later, Harry Wilson claimed the record in November 2012. Bale became the youngest player on October 7, 2006, to score a goal for the Wales senior team. Bale scored a wonderful freekick against Slovakia in the Euro 2008 qualification. Bale led Wales to UEFA Euro 2016, major competitions since 1958 and became the first Welsh player to score in a major international tournament since Terry Medwin’s goal in 1958.

At present, Bale lives in Madrid. He has a beautiful fiancee Emma Rhys-Jones. Emma is his high school sweetheart. The love couples have two children and they are expecting their third child. their first child, Alba Violet was born in Cardiff on October 21, 2012, and Nava Valentina was born on March 22, 2016. Bale announced that they are engaged a day after his 27th birthday on July 17, 2016. Bale is completely teetotal, far from alcoholic beverages. Bale is a huge golf fan. He plays golf during his vacations or free time in his back garden, where he has installed a replica of the 17th hole – the Island Green – at TPC at Sawgrass.

Real Madrid signed Bale on a world record transfer fee in that time for 100.8 million Euro. Bale surpassed Cristiano Ronaldo (94 million Euro, highest transfer fee in that time). Today Bale endorsed several companies like Adidas, EA Sports, Lucozade, and BT Sport. Bale has an annual salary of $25 million-plus $9 million from endorsements. At present, the net worth of Bale is estimated to be around $125 million.

Our contents are created by fans, if you have any problems of Gareth Bale Net Worth, Salary, Relationship Status, Married Date, Age, Height, Ethnicity, Nationality, Weight, mail us at [email protected]