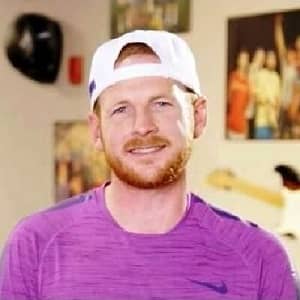 Garrett Hilbert is an American Youtuber who is best known to the world as one of the five members of the Youtube channel, ‘Dude Perfect’. With over 53 million subscribers, the channel is one of the most popular Youtube channels of all-time. They mainly became famous for sports trick shots and comedy videos.

How old is Garrett Hilbert?

Garrett Hilbert was born in Plano, Texas, on May 13, 1987. As of 2020, he is 33 years old. He has not revealed anything about his parents and siblings. Moreover, there is very little information about his childhood and early life.

Hilbert moved to California with his family when he was young. His ethnicity is Caucasian.

Hilbert studied at Texas A&M. He was an architecture major.

While attending university, he and his four other friends, Cody Jones, Tyler Toney, Coby, and Cory Cotton formed their own YouTube channel, ‘Dude Perfect’ in June 2009.

Their unique trick shots and comedy videos started gaining a lot of popularity and their channel started growing a lot. Moreover, they started landing professional endorsements. Also, their team traveled to England for a video segment with professional footballers of some top English football clubs such as Arsenal F.C., Manchester City F.C, and Chelsea F.C. In addition to football, they also got opportunities to work with other sportsmen of different sports such as volleyball star Morgan Beck, NBA star Chris Paul, and also the famous country singer Luke Bryan adding to their popularity and hype.

In 2011, they launched their self-titled mobile game for Android and iOS. They also released their next version titled ‘Dude Perfect 2.’ In 2015, Dude Perfect landed a TV deal and their own series, ‘The Dude Perfect Show’ that premiered on CMT in 2016. It was renewed for a second season that aired on Nickelodeon.

As of August 2020, Dude Perfect is one of the most popular channels on Youtube with over 53 million subscribers. Their most popular video titled ‘Water Bottle Flip 2’ has gained over 314 million views. Other popular videos include Ping Pong trick shots, Real Life, etc. Moreover, their video views have crossed 11 billion.

How tall is Garrett Hilbert?

Garrett Hilbert stands tall at a height of 5 feet 11 inches and weighs around 71 kg. His hair color is auburn and his eye color is blue.

What is the Net Worth of Garrett Hilbert?

Who is Garrett Hilbert married to? Wife, Children

From their marriage, the couple has three children. They have a daughter named Iris and sons named Owen and Lincoln.

Questions have been raised over the legitimacy of their tricks and videos amid their huge success in Youtube. After the topic became very popular, Good Morning America hosted a segment about the tricks’, however, the experts could not find evidence of the tricks being fake.

The five guys have proved time and again that the tricks are legitimate although people have tried to prove that they are fake.

Also, they have responded to these claims saying they are good for publicity and make their tricks look even more impressive. However, they have also admitted that the tricks take multiple attempts to convert the final shots which they show on the videos.

Our contents are created by fans, if you have any problems of Garrett Hilbert Net Worth, Salary, Relationship Status, Married Date, Age, Height, Ethnicity, Nationality, Weight, mail us at [email protected]