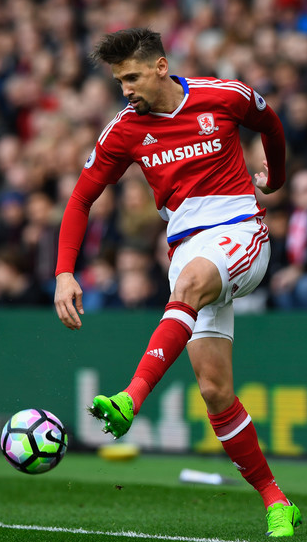 Gaston Exequiel Ramirez Pereyra is an Uruguayan footballer who plays as an attacking midfielder for Italian club Sampdoria and the Uruguay national team.

Ramírez moved to the capital city Montevideo to join Peñarol when he was sixteen. He made his professional debut for the club at age 18, in a 1–0 loss against Sporting on 21 March 2009. Ramírez played for Penarol for almost 2 years from 2008-2010. He played 42 games for Penarol and scored 8 goals. On 25 August 2010, Ramírez was sold to Serie A side, Bologna. He played 58 games for Bologna and scored 12 goals Later On 31 August 2012, Ramírez joined Southampton. He played 48 games for Southampton and scored 6 goals. While he was in Southampton he joined Hull City on a loan On 1 September 2014, Ramírez scored 1 goal in 22 games. After playing for Hull City on a loan again he joined Middlesbrough on a loan On 26 January 2016, and he scored 7 goals in 18 games. Ramírez re-joined Middlesbrough, leaving Southampton, and signed a three-year contract with Middlesbrough on 22 July 2016. After Rejoining Middlesbrough he played 24 games and scored 2 goals. Later On 4 August 2017, Ramírez joined Serie A side Sampdoria and scored 3 goals in 37 games in the 2017/2018 season.

On 8 October 2010, he received his first full cap for Uruguay in a 7–1 friendly win against Indonesia. In the 2012 Summer Olympics, scored a goal during a warm-up match against Panama on 15. On 26 July, he scored a free-kick goal to equalize as Uruguay won 2–1 against the United Arab Emirates. In June 2013, Ramírez played the 2013 FIFA Confederations Cup tournament. He played against  Spain and Tahiti but didn’t score a goal for his national team.

He played in the 2014 FIFA World Cup He made his tournament debut in the last group game against Italy. He supplied the cross from which Diego Godín scored the only goal of the game, putting Uruguay through to the knock-out stages. After missing the Copa América due to a hamstring injury; Ramírez played his first game for Uruguay in a year in a 3–1 win over Trinidad. He played China Cup in March 2018 but fail to score a goal.

Ramírez married Micaela Duarte in the summer of 2012. In early 2016 he became a father when his wife gave birth to a daughter. Upon moving to England, Ramírez said he was taking English lessons as part of his work permit requirements.

Our contents are created by fans, if you have any problems of Gaston Ramirez Net Worth, Salary, Relationship Status, Married Date, Age, Height, Ethnicity, Nationality, Weight, mail us at [email protected]