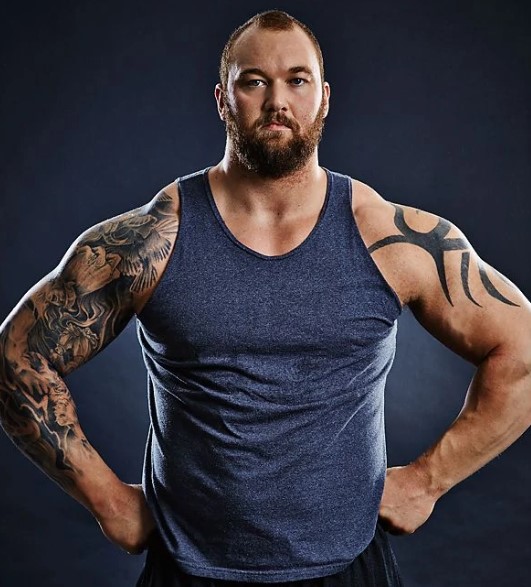 Hafthor Bjornsson is an Icelandic professional strongman and actor, who is the first person to have won the three championship titles all in the same year which includes, “Arnold Strongman Classic”, “Europe’s Strongest Man” and “World’s Strongest Man”. He is widely recognized for playing the role of Gregor “The Mountain” Clegane in the popular HBO series, “Game of Thrones” for five seasons.

What is Hafthor Bjornsson Famous for?

Where was Hafthor Bjornsson Born?

Hafthor Bjornsson was born on November 26, 1988, in Reykjavik, Iceland. His birth name is Hafþór Júlíus Björnsson. His nationality is Icelandic. He belongs to British-Iceland ethnicity while Sagittarius is his zodiac sign.

Hafthor used to work on the family farm as a child even though he wasn’t tall at the time but was always big. He was raised along with his sister named Hafdís Lind Björnsdóttir.

Career as an Actor

Who is Hafthor Bjornsson Married to?

Hafthor Bjornsson is married to a Canadian waitress, Kelsey Henson. Kelsey and Hafthro met for the first time in 2017 when he was in Alberta, Canada for a strongman competition and visited the bar where Henson worked.

The couple actually looks different than other couples as the duo even garnered attention for the difference in their respective heights, as Henson is just 5ft. 2inch.(157 cm) while Hafthor is a giant man with his height of 6ft. 9inch. The couple got married on October 21, 2018, in a blasting wedding ceremony. On April 11, 2020, Hafthor announced expecting their first child together.

Previously, Hafthor was in relationships with several other beautiful ladies including his former girlfriend Thelma Björk Steimann with whom he has his first daughter, named Theresa Lif. In an online video interview, Hafthor lamented not having seen his daughter in three years not even once.

During early 2017, he dated Andrea Sif Jónsdóttir whom he met at a gym. The couple even lived together in Reykjavik at the time.

Besides, Hafthor was diagnosed with Bell’s palsy in 2017. He also has sleep troubles after a heavy meal due to his body weight.

How Tall is Hafthor Bjornsson?

Hafthor Bjornsson is a giant man in his 30s. Bjornsson is a handsome man with his wonderful athletic masculine body physique with his 32 inches thighs, 20 inches biceps, and 46 inches waist. He has a huge height of 6ft. 9inch.(2.06 m) for which he is regarded as “The Mountain” as well. He also has a heavy bodyweight of around 193kg.

Besides, Hafthor has several tattoos on his bodies including a tattoo of Jón Páll Sigmarsson on his calf. He also has tattoos of those in relation to Norse deities and the Viking culture.

What is the Net Worth of Hafthor Bjornsson?

Hafthor Bjornsson has quite a great earnings from his professional career as a strongman and as an actor. Belonging to this field of entertainment for over a decade, he has managed to amass a million worth fortune from his several wins contests and as an actor. He has an estimated net worth of around $2 million.

Our contents are created by fans, if you have any problems of Hafthor Bjornsson Net Worth, Salary, Relationship Status, Married Date, Age, Height, Ethnicity, Nationality, Weight, mail us at [email protected]