Halle Bailey is a young American singer and actress. 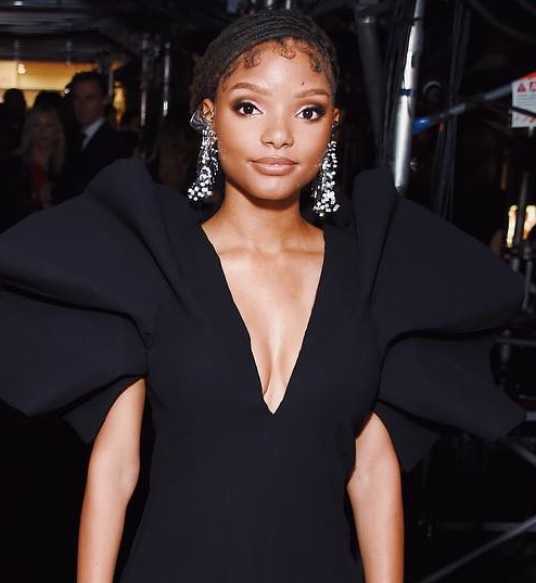 Halle Bailey is a young American singer and actress. She has earned fame in the entertainment industry at a very young age. She is best known as the member of contemporary R&B duo, ‘Chloe x Halle’. Another member of the duo is her own older sister, Chloe Bailey. They started their musical career by doing cover songs. They began posting their cover songs on their YouTube channel, ‘Chloe x Halle’. They earned recognition after they did the cover of “Pretty Hurts” by Beyonce. They have already released their debut album, “The Kids Are Alright”. They earned two Grammy nominations for Best New Artist and Best Urban Contemporary Album in 2019. Their joined YouTube channel has over 1 million subscribers, whereas their joint Instagram account has over 1.6 million followers.

One of the Bailey sisters, Halle Bailey has got a breakthrough role as Princess Ariel on Disney’s live-action “The Little Mermaid”. Disney announced it on Wednesday 3 July 2019.

The duo sisters Chloe, 20, and Halle, 18 performed at 2019 Grammys.T hey performed “Where Is the Love” paying tribute to Donny Hathaway, Roberta Flack. Their performance also became their Grammy stage debut. They were also nominated for Best New Artist and Best Urban Contemporary Album at 2019 Grammys for their debut album, “The Kids Are Alright”.

The duo sisters were noticed by Beyonce when they sang the cover of her song, “Pretty Hurts”.

Halle Bailey was born on 27 March 2000. She was born to a father, Doug Bailey, and a mother Courtney Bailey. She belongs to Black ethnicity. Her birthplace is in Atlanta, Georgia in the United States. She holds American nationality. Her religion is Christianity. Talking about her siblings, she has an older sister, Chloe Bailey. They grew up in Atlanta, Georgia. Other information about her upbringing is currently unavailable. Information about her education is also currently unavailable. She is a high school graduate. It will be updated soon.

Halle and her older sister, Chloe first started doing covers of pop songs and posted it on their YouTube channel, Chloe x Halle.

While doing covers of different songs, they did the cover of “Pretty Hurts” by Beyonce.

Cover of Beyonce’s “Pretty Hurts” by the duo sisters caught the attention of Beyonce and her label, Parkwood Entertainment imprint in 2015.

They released their debut EP “Sugar Symphony” in April 2016.

They also released their two other singles, “Drop” and “Fall”.

Beyonce included the duo sisters as the opening act at the Beyonce’s European leg of The Formation Word Tour.

In 2017, they released their self-described, “This is not an album” and “not really a mixtape” project, ‘The Two of Us’. The sisters wrote and produced most of the songs on the project. The project earned critical acclaims. Their project was also featured on Rolling Stone’s Best R&B Albums of 2017 list.

The duo released the theme song, “Grown” for an American sitcom series, Grown-ish in December 2017.

The duo was also added to the cast on the series in recurring roles. Later, they were made series regular.

They performed as the opening act for the U.S. leg of Beyonce and Jay-Z’s On the Run II Tour, alongside DJ Khaled in May 2018.

Besides singing, she has appeared in minor roles along with her sister, Chloe in films including  Last Holiday, Let It Shine, and Joyful Noise.

She has appeared in minor roles in television shows, House of Payne, Austin & Ally, and Grown-ish.

In 2016, they made cameo appearances in Beyonce’s Lemonade visual album.

Who is Halle Bailey Dating?

Halle is unmarried. She is very young to get married and is more focused on her career rather than being in a relationship. She is an aspiring singer who is focusing on establishing herself in the entertainment industry. There are no rumors about her dating with anyone yet. She is reportedly single.

What are Halle Bailey Body Measurements?

Halle Bailey has a slim body build. Her exact height is not available. Her body weight is 45 kg. She has dark brown eyes and her hair color is black. Her other body measurement will be updated soon.

What is Net Worth?

The net worth of aspiring singer, Halle Bailey is yet to be estimated. She has stepped into the entertainment industry and has a long way to go to achieve stardom. Her major source of income is from her singing and acting career. She has also appeared in films and television shows.

Our contents are created by fans, if you have any problems of Halle Bailey Net Worth, Salary, Relationship Status, Married Date, Age, Height, Ethnicity, Nationality, Weight, mail us at [email protected]