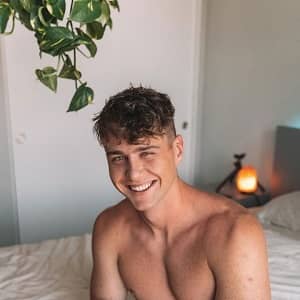 Harry Jowsey is a popular Australian Model, businessman, Reality TV star and social media personality. He is popular in all the fields he works in but most of the credit goes to his role in the show Too Hot to Handle.

When was Harry Jowsey born?

Harry Jowsey was born on the 24th of May 1997 in Queensland, Australia. As of 2020, his age is 23. His nationality is Australian and his ethnicity is Caucasian.

Harry also has not said anything regarding his education. But judging by his appearance and performances on TV, we can safely assume that he is well educated.

How did Harry Jowsey build his career?

Harry gained fame as a reality TV star after his participation in the reality dating show Heartbreak Island. He went on to win the whole thing along with Georgia Byers and in return won a cash prize of 100k Australian Dollars. Additionally, he gained a lot of fame as Heartbreak Harry because of the show. After this, Harry moved to L.A. to pursue a career in fashion and even started his own clothing line. He is also a model and has already modelled for popular brands such as Calvin Klein and Tommy Hilfiger.

As a reality TV star, His most popular role came in the Netflix reality dating show, Too Hot to Handle. Due to its massive audience, the show was viewed by millions of viewers and Harry earned a lot of fame doing this. He even won the show along with 9 others, and they each got 75k U.S. dollars.

What is Harry Jowsey’s net worth?

As of 2020, Harry Jowsey has an estimated net worth of approximately 1 million U.S. dollars. He has not revealed anything about his annual salary as of yet. And unfortunately, this figure is much harder to estimate as he has multiple sources of income.

What are the physical statistics of Harry Jowsey?

Harry stands at an impressive height of 6 feet 4 inches and weighs approximately 94 kilograms. He is blessed with good looks along with a fit and muscular physique. He has brown hair and piercing blue eyes.

Who is Harry Jowsey dating?

Harry Jowsey is currently in a relationship with fellow reality TV star and social media personality, Francesca Farago. The two were a couple in the show Too Hot to Handle, and though they broke up afterwards, they patched up and made their relationship official in April of 2020. Harry even proposed to Francesca unofficially during the coronavirus lockdown to which Francesca answered yes.

Our contents are created by fans, if you have any problems of Harry Jowsey Net Worth, Salary, Relationship Status, Married Date, Age, Height, Ethnicity, Nationality, Weight, mail us at [email protected]