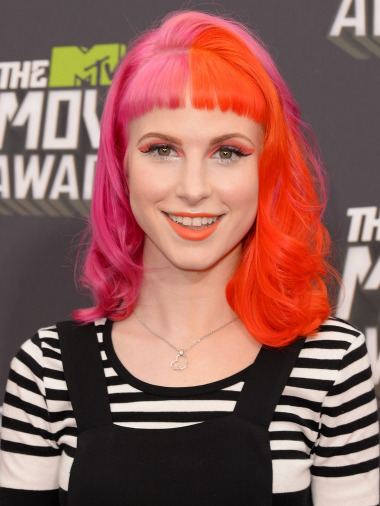 Hayley Nichole Williams famed as Hayley Williams is an American singer-songwriter. She is famous for being the lead vocalist, primary songwriter, and keyboardist of the rock band “Paramore”. In 2004, she formed Paramore alongside Josh Farro, Zac Farro, and Jeremy Davis. The band currently consists of Hayley Williams, Zac Farro and Taylor York. The band has released five studio albums: All We Know Is Falling (2005), Riot! (2007), Brand New Eyes (2009), Paramore (2013), and After Laughter (2017). She released her first album All We Know Is Falling on July 26, 2005, via “Fueled by Ramen”. The album reached #8 in UK Rock Chart and was certified as Gold in the UK. It sold more than 530,000 copies, just in the USA. She has appeared in the TV movie documentary “Paramore: Born for This” in 2007 as herself which is her first film. In the year 2009, she appeared in another short movie Paramore’s ‘Brick by Boring Brick’ as herself. Regarding her solo career, she recorded the song “Teenagers” for the soundtrack of Jennifer’s Body (2009) and has collaborated with artists such as October Fall, The Chariot, Set Your Goals, Zedd, and New Found Glory. In the year 2010, she was featured on the single “Airplanes” by B.o.B. It peaked at number two on the U.S. Billboard Hot 100. A sequel to the song, “Airplanes, Part II”, features new verses from B.o.B. and verse from Eminem, while Williams’ vocals remain the same. She released her debut solo single “Simmer” on 22nd January 2020, and announced on the same day that her debut studio album, “Petals for Armor”, would be released on 8th May 2020.

What is the Real Name/Full Name of Hayley Williams?

Born on 27th December 1988 as Hayley Nichole Williams (real name/birth name), Hayle Williams is American by nationality. Her birthplace/hometown is in Meridian, Mississippi, the USA. She was born to her parents; Joey (father) and Cristi Williams (mother). After her parents divorced in 2002, Williams moved with her mother to Franklin, Tennessee. About her siblings, she has four namely Erica Williams (Younger step-sister), McKayla Williams (Younger step-sister), Jiana (Younger step-sister), Anthony (Younger step-brother). She is Christian by religion and her zodiac sign is Capricorn. Her ethnicity is American-White. Her race is White. As per her education, she has attended some schools in Mississippi, where she was born. Later, she moved to Tennessee and went to a different school, where she met her future band members, The Farro brothers. After that, she faced bullying and so was homeschooled. As of 2019, she celebrated her 31st birthday.

How Hayley Williams pursue her career in the music industry?

Who is Hayley Williams married to?

What is the Net Worth of Hayley Williams?

Науlеу Wіllіаmѕ is a famous singer as well as a songwriter. She hаѕ аn еѕtіmаtеd nеt wоrth оf $15 mіllіоn as of 2020. Неr рrіmаrу ѕоurсе оf іnсоmе іѕ hеr muѕіс саrееr. Ѕhе іѕ thе fоundеr оf а bаnd knоwn аѕ Раrаmоrе, whісh hаѕ rеlеаѕеd fіvе аlbumѕ. She also rесеіvеѕ а ѕhаrе оf thе ѕаlеѕ mаdе frоm thе аlbumѕ. Shе hаѕ wrіttеn ѕоngѕ fоr аrtіѕtѕ, аnd оthеrѕ hаvе соllаbоrаtеd hеr іn thеіr ѕоngѕ. Besides she has many business ventures and endorsements. In 2015, she launched the online beauty and music series “Kiss-Off” on Popular TV. In 2016 Williams launched her own hair dye company, Good Dye Young. Moreover, she also produced own temporary hair dye line with the name Poser Paste in the year 2017. She has also partnered and endorsed several brands and companies like MAC Cosmetics, Nylon, Hard Rock Cafe, and a few other more since 2013. She also earns from social media platforms like Instagram from where she charges an average of $500 per sponsored post. Talking about her cars, she owns a Mazda car worth somewhere around $21 thousand along with some others like PT Cruiser ($26k to $29k), and BMW X6 ($78k to $105k). Regarding her house, Hayley Listed Nashville Home For $1 Million in 2019. As of now, she is living a luxurious lifestyle from her earnings.

How tall is Hayley Williams?

Hayley Williams is a very beautiful woman with a slim body build. She has got a tall height of 5 ft 2 in with a bodyweight of 53 KG. She dyes her hair as bright red-orange. She told Spin that her natural hair color is light brown or blonde. Her eye color is Green. Her body measurements are 34-25-34 in. Her dress size is 6 US and shoe size is 5 US. She has a tattoo on the inside of her right ankle saying “Shave Me”.

Our contents are created by fans, if you have any problems of Hayley Williams Net Worth, Salary, Relationship Status, Married Date, Age, Height, Ethnicity, Nationality, Weight, mail us at [email protected]