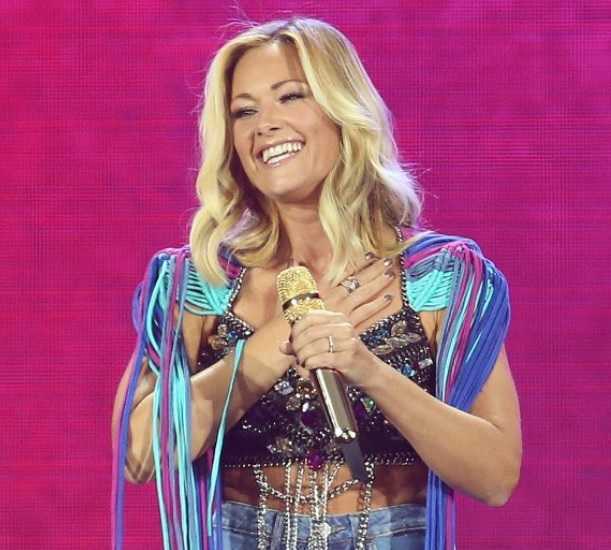 Helene Fischer is a famous leading German singer, actress, dancer, and television presenter who has won numerous awards including seventeen “Echo” awards and three “Bambi” awards. She has sold at least 15 million records of Album.

What is Helene Fischer famous for?

– Famous as a leading German Singer and for her album, “Farbenspiel”.

Where was Helene Fischer born?

Helene Fischer was born on 5th August 1984 in Krasnoyarsk, Russia. Her birth name is Helene Fischer. Her nationality is German. She has German ethnicity. Her zodiac sign is Leo.

She was born to Peter Ficher(father) and Marina Ficher(mother). She has an elder sister, Christina Ficher. Her father was a physical education teacher and her mother was an engineer. Her ancestors were Black Sea Germans.

When Ficher was of 3 years, her family emigrated to Rhineland-Palatine, Germany. She was raised in Germany.

She attended Frankfurt Stage & Musical School for three years, where she learned singing and acting. During those years, she performed on stage at the Staatstheater Darmstadt and her mother secretly copied a demo CD to know the reaction of Professionals.

How is Helene Ficher’s career?

-In the year 2005, Ficher made her debut as a singer on the stage in a duet in a program of the channel ARD along with singer Florian Silbereisn(her husband).

-She released her first English album, “The English Ones”, on 7 June 2010. The album was able to gain popularity in Germany.

-She made her acting debut in the German TV series “Das Traumschiff” in the year 2013. She also released her hit album “Farbenspial” in Germany in the same year and became the most successful German female artist within the 1st week of release.

-She played a tour in 2014 and 2015 with the album “Farbenspiel”. She also sang in the Olympia Stadium of Berlin in front of thousands of people and up to now, 2.4 million copies of her album have been sold.

-She released her 8th studio album, “Helena Fischer” in 2017. This album also became popular within its 1st week of release.

-In 2018 she started her second stadium tour, performing in Germany, Switzerland, The Netherlands, and Austria with over 1.6 million fans. She was placed as seven of the world-wide biggest touring musician of the year in the New York Times magazine.

-She was also ranked 8th in the Forbes list of top-earning female artists worldwide.

-She also hosts a popular yearly music entertainment show, “Helena Fischer Show”, where she has performed together with various artists, David Garrett, Michael Bolton, and many others.

How is Helene Fisher’s personal life?

The beautiful singer, Fisher is married to her boyfriend, Florian Silbereisen. Silbereisen is also a singer and TV presenter.  The couple started dating each other in 2005 and finally tied a knot on May 18, 2018.

Fischer was also rumored to be in a relationship with Michael Bolton in the past.

What is the net worth of Helene Fisher?

She has a luxurious lifestyle with her income from her profession.

How tall is Helene Ficher?

The German singer has a well-maintained body figure. She stands tall with a height of 5ft.2inch and has a normal body weight of 53 kg. She has blonde hair and brown eyes.

Our contents are created by fans, if you have any problems of Helene Fischer Net Worth, Salary, Relationship Status, Married Date, Age, Height, Ethnicity, Nationality, Weight, mail us at [email protected]