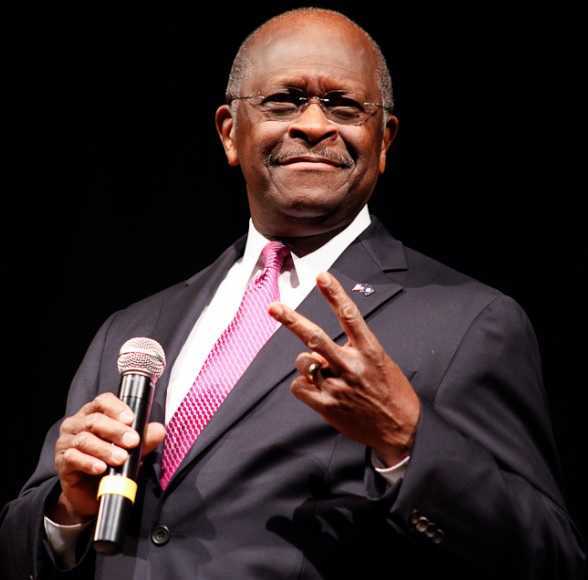 Herman Cain is an American politician and author, business executive, radio host, syndicated columnist, and Tea Party activist from Georgia. He was a candidate for the 2012 US Republican Party presidential nomination. He had a successful career as a business executive at Burger King and Godfather’s Pizza, both subsidiary of Pillsbury Company between 1981 and 1988. He later served as the chairman of the Federal Reserve Bank of Kansas City Omaha, deputy chairman, and later chairman of the Federal Reserve Bank of Kansas City between 1989 and 1996. He served as the CEO and president of the National Restaurant Association between 1996 and 1999. He has also served as a member of the board of directors of several companies, Aquila, Inc., Nabisco, Whirpool, Reader’s Digest, and AGCO. He later became active in politics. Cain died from complications of COVID-19 in July 2020.

Herman Cain, a former US presidential nominee, died after contracting COVID-19. In Atlanta, the former Republican President died at the age of 74 from a Coronavirus complication. It’s unclear where he got the infection, but he was among the lawmakers who attended Donald Trump’s Tulsa rally on June 20, 2020. He didn’t wear a mask or maintain a social distance while at the rally. He also traveled to cities like Arizona, where COVID-19 cases were on the rise. He was one of Trump’s backers who cautioned against wearing a mask or avoiding social contact. On June 29, he was diagnosed with Coronavirus and admitted to the Atlanta hospital. Cain died as a result of Covid-19 complications. In 2006, he beat Stage IV cancer, but the COVID-19 pandemic was too much for him.

What is Herman Cain’s claim to fame?

One of the most prominent business executives and a presidential nominee for the Republican Party of the United States in 2012.

Where did Herman Cain get his start?

On December 13, 1945, Herman Cain was born. Luther Cain Jr. was his father, and Lenora (Davis) Cain was his mother. In the United States, he was born in Memphis, Tennessee. He is a citizen of the United States of America. He was born and raised on Atlanta’s west side.

Archer High School was his alma mater. In 1963, he graduated from high school. He went on to Morehouse College, where he received a bachelor’s degree in mathematics in 1967. Later, he attended Purdue University and earned a Master of Science in Computer Science in 1971.

A Career as a Business Executive

He relocated to Minneapolis in 1977 to work for Pillsbury. In 1978, he was promoted to director of market research in the restaurant and foods division.

During the 1980s, he was tasked with analyzing and managing Pillsbury’s 400 Burger King stores in the Philadelphia area.

In 1986, Pillsbury named him president and CEO of another subsidiary, Godfather’s Pizza, based on his performance at Burger King.

He stepped down as chairman of the Federal Reserve Bank of Kansas City in order to become more active in national politics.

In 1996, he left Godfather’s Pizza and relocated to Washington, D.C.

From 1996 to 1999, he was the CEO of the National Restaurant Association, a trade group and advocacy body for the restaurant industry. He previously served on the organization’s board of directors.

Aquila, Inc., Nabisco, Whirpool, Reader’s Digest, and AGCO, Inc. were among the companies on which he served on the board of directors.

Job in the Media

He has a nationally syndicated op-ed column. The North Star Authors Association distributes it.

In 2009, he was featured in the documentary An Inconvenient Tax.

From 2008 to 2011, he anchored The Herman Cain Show on WSB, an Atlanta talk radio station.

In January 2012, he returned to work for WSB. He provides commentary and fills in for Erick Erickson and Neal Boortz on occasion.

He began writing weekly online columns for the news organization Newsmax in October 2012 under the title “9-9-9 To Save America.”

In January 2013, he took over Boortz’s radio talk show after his retirement. In December 2016, the show was dropped from the Westwood One Radio Network, but it continued to air in limited syndicated form through WSB’s parent company, Cox Radio.

In February 2013, he became a contributor for Fox News Channel.

He received the 1996 Horatio Alger Award.

Cain as president-elect of the National Restaurant Association publicly opposed the Clinton health care plan of 1993. Jack Kemp, Conservative politician and former housing secretary was so impressed with Cain’s performance and chartered a plane to Nebraska to meet Cain after the debate. Cain credits Kemp with his becoming interested in politics.

He was a senior economic adviser to the Bob Dole presidential campaign in 1996.

He briefly ran for the Republican presidential nomination in 2000. He endorsed Steve Forbes after ending his own campaign.

He ran for the US Senate in Georgia in 2004 and finished second in the primaries.

He started working for the political advocacy group Americans for Prosperity (AFP) in 2005.

He addressed more than 40 Tea Party rallies in 2010. He announced his candidacy for the 2012 presidential campaign in May 2011.

He won the straw polls of the Florida Republican Party, TeaCon, and the National Federation of Republican Women’s Convention.

His 9-9-9 plan attracted skepticism from his fellow candidates at numerous Republican debates.

Politico reported in late October 2011 that Cain had been accused by two women of sexual harassment and misconduct during his time as CEO of the National Restaurant Association in the late 1990s. Two additional women made harassment accusations later. He denounced allegations of sexual harassment and adultery as “character assassination” during an event in Dayton, Ohio in November 2011.

He announced in December 2011 that he was “suspending” his campaign for the presidency following allegations of sexual harassment and adultery.

Who is Herman Cain Married to?

Herman Cain was a married man. He was married to Gloria Cain. They got married in 1968 soon after her graduation from Morris Brown College. She is a homemaker. She also has experience as a teacher and a librarian. The couple has two children and three grandchildren.

He was diagnosed with Stage IV cancer in his colon and metastases to his liver in 2006. He was given a 30 percent chance of survival. He underwent surgery and chemotherapy. He is in remission after treatment.

He also serves as an associate minister at Antioch Baptist Church North in Atlanta.

What is Herman Cain’s Net Worth?

Herman Cain is one of the successful business executives. He later became active in national politics. As of 2019, his net worth is estimated at $18 million.

Our contents are created by fans, if you have any problems of Herman Cain Net Worth, Salary, Relationship Status, Married Date, Age, Height, Ethnicity, Nationality, Weight, mail us at [email protected]