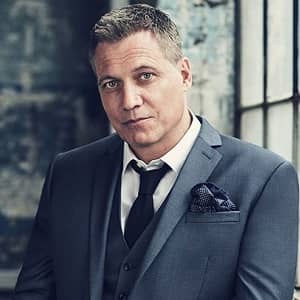 Holt McCallany is an actor, writer, and producer from America. He is most famous for portraying Bill Tench on the series Mindhunter (2017–present). He even has appeared as several supporting roles in various television series and films.

When was Holt McCallany born?

Holt McCallany was born as Holt Quinn McAloney on 3rd September 1963 in New York City, New York. As of 2020, his age is 56. He was born to father Michael McAloney and mother Julie Wilson. She was an American singer and actress and his father was an Irish actor and producer.

Later, he went to Paris American Academy and studied Shakespeare at Oxford University. He has a brother named Michael McAloney Jr. And while they were attending school, their parents got divorced.

How did Holt pursue his career?

Holt McCallany’s first appearance in the professional career was as an apprentice actor at the Great Lakes Shakespeare Festival in Cleveland, Ohio. After that Holt landed a series of supporting parts in such films as Casualties of War, Alien 3, Creepshow 2, The Search for One-eye Jimmy, Jade, and The Rough Riders.

He is even quite famous for the role of legendary boxing trainer Teddy Atlas in the HBO telefilm Tyson. He became a supporter of the Atlas Foundation Charity, a grassroots organization dedicated to helping children and families with medical and financial hardship.

Since then, Holt has delivered performances for iconic films like Fight Club, Three Kings, Men of Honor, Below, The Losers, The Perfect Guy, Sully, Shot Caller, and many others. In television, he has played a detective on CSI: Miami and starred in the FX series Lights Out as a boxer with pugilistic dementia.

His first French-language film will be released later this year, Le Dindon, an adaptation of the George Feydeau comedy.

How tall is Holt McCallany?

The professional actor stands at a tall height of 6 feet 1 inch with a weight of 83 kilograms. It must be quite a surprise to know that he is actively learning martial arts which comes handy in his role for Mindhunter series. Furthermore, he has black grey hair mixed with a pair of blue eyes.

What is the Net worth of Holt McCallany?

Holt McCallany is a professional American actor, writer, and producer who has a net worth of $3 million. The star has made most out of his career at the age of 57 and seems to have lived a luxurious life out of the fortune. However, information regarding his official earnings is currently unavailable.

Currently, Holt McCallany is living a happy married life with his long-time girlfriend-turned-wife, Nicole Wilson. Nicole is a TV actress and artist. She belongs to a family of actors as well.

The pair exchanged wedding vows in 2006. However, they haven’t shared the detail about where did their marriage take place.

As a 57-year-old actor, he isn’t available on the Instagram platform but he is very active on Twitter with fan followers of 14.6k. Likewise, his official Facebook profile has about 4,761 people following at the time of writing this article.

Our contents are created by fans, if you have any problems of Holt McCallany Net Worth, Salary, Relationship Status, Married Date, Age, Height, Ethnicity, Nationality, Weight, mail us at [email protected]