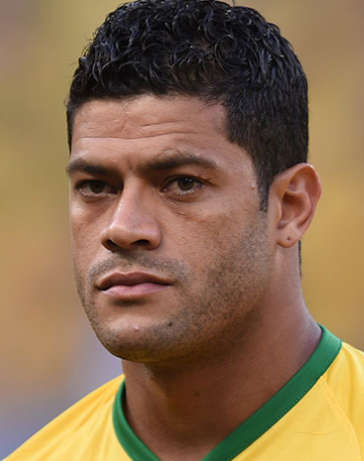 Givanildo Vieira de Sousa famed as Hulk is a famous footballer from Brazil. He is currently playing for Shanghai SIPG as a forward. In 2012, he joined Russian Premier League side Zenit Saint Petersburg for €60 million, winning all three domestic honors and being named the competition’s best player and being top scorer, once each. He was transferred to Shanghai SIPG for an Asian record of €58.6 million in 2016. He made his international debut in 2009 and played for Brazil at the 2012 Summer Olympics, 2013 FIFA Confederations Cup, and a fourth-place finish at the 2014 FIFA World Cup. Overall, he is a very talented footballer.

The striker ended his 12-year relationship with ex-wife Iran Angelo in July of last year and reports of his relationship with her niece Camila Angelo, 31, later surfaced in December. It was claimed the couple had been dating since October of that same year. The 33-year-old striker has reportedly married Camila after writing “married” on his social media bio. The couple has posted several pictures together where they can be seen wearing what appear to be wedding rings. According to the Argentine newspaper ‘Infobae’, the “sudden marriage was also due to” the fact Camila “needed a visa to stay in the country (China)”.

What is the birthplace of Hulk?

Hulk was born on 25th July 1986 as Givanildo Vieira de Sousa. His nationality is Brazilian and his ethnicity is Mixed. He is Christian by religion. His birthplace is in Campina Grande, Brazil. He got the name Hulk from his father, who found his son’s behavior similar to that of the famous Marvel Comics’ superhero of the same name. He was born to his father, Jovan, and his mother, Maria do Socorro. He grew up with his siblings Carrinha, Jessica, Irmas, Angelica, Gilvania, Nilda, and Narayan. There is no information regarding his education.

How Hulk Pursue his career in Football?

Who is Hulk’s Wife?

Hulk is a married person. He was married to his beautiful wife, Iran Angelo. The couple also has three children. He often posts pictures of his spouse and children on his official Instagram account. But the couple separated after the 12 years of their married life. Recently, he married Camilo Angelo, his ex-wife suddenly. “It was Hulk himself who made the information public because he had nothing to hide. His position is transparency and he wants to avoid lies and malicious comments.” As of now, the couple is living a happy life without any disturbances. His sexual orientation is straight and he is not gay.

The net worth of Hulk as of 2020 is believed to have $54 Million where he received $20 Million as a yearly salary from his current team. He is a very successful footballer and his major source of earning is from his football career and he is satisfied with his earnings.

How tall is Hulk?

Hulk is a very handsome person with an athletic body build. He has got a tall height of 5 ft 11 in or 1.80 m. His body weighs 86 Kg. His chest size is 42 in, his waist size is 34 in and his biceps size is 15 in. His eye color is brown and his hair color is black. He maintains his body a lot.

Our contents are created by fans, if you have any problems of Hulk Footballer Net Worth, Salary, Relationship Status, Married Date, Age, Height, Ethnicity, Nationality, Weight, mail us at [email protected]