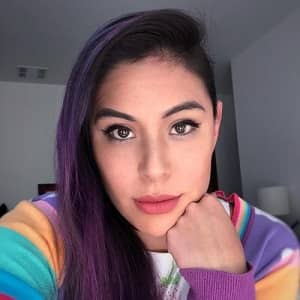 Tiffany Michelle Garcia, better known by her internet alias of ihascupquake is a popular American Youtuber. She rose to fame for her gaming videos and she has gathered a loving and dedicated fanbase over the years.

Tiffany has not revealed much about her family background and so, her parents’ names are still unknown. But we do know that she has an older brother Anthony Garcia, with whom she is really close.

Tiffany has not shared the details of her education. Though it has not been revealed as to exactly where she studied, we are certain that she has graduated both high school and college..

How did ihascupquake build her career?

Tiffany was not sure of what to do after she graduated from college. Thankfully, her friends introduced her to Youtube and she started her career by making video content for a company by the name of Machinima. Her content there was loved by the audience and seeing that she could potentially build a big channel of her own, Garcia created her own channel ihascupquake.

She is very confident and full of energy in her videos. This enthusiasm, along with her loveable personality and sense of humor quickly launched her to stardom.

As of now, Garcia has 4 YouTube channels, ihascupquake, iHasCupquakeLive, TiffyQuake, and CupquakePlays. She has amassed more than 6 million subscribers on her main channel and her second channel TiffyQuake also has an impressive 1.26 million subscribers. Her content mainly includes gaming videos, animated shorts, and even some DIY tutorials.

Her most viewed video to date, Five Nights at Freddy’s Animated Short, has gathered over 82 million views. She is very loved by her fans and it seems like her channel will keep on growing for the foreseeable future.

What is ihascupquake’s net worth?

As of 2020, ihascupquake has an estimated net worth that amounts to approximately 8 million U.S. dollars. She made all this money through her hugely popular Youtube channel and the number is sure to grow as time goes on. She has not revealed her annual salary as of yet.

What are ihascupquake’s physical statistics?

Tiffany stands at a height of 5 feet 3 inches tall and weighs approximately 58 kilograms. Though her natural hair color is black, she often dyes it pink or violet. She is very good looking and has a slim physique with dark brown eyes.

Tiffany is currently married to Mario Herrera, a fellow Youtuber who is best known by his virtual alias of Red. The two dated for 7 long years before finally tying the knot on the 19th of May, 2012. Mario and Tiffany met through MySpace and their conversations soon turned to affection for one another and they started dating.

Our contents are created by fans, if you have any problems of ihascupquake Net Worth, Salary, Relationship Status, Married Date, Age, Height, Ethnicity, Nationality, Weight, mail us at [email protected]