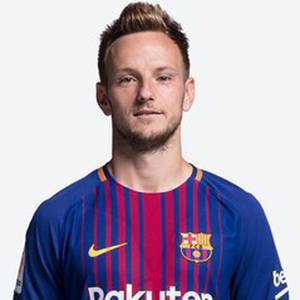 Ivan Rakitic is a Croatian professional football player. He plays as a central or attacking midfielder. Having started his professional football career at FC Basel in 2005, he later went on to play for Schalke 04, Sevilla, and Barcelona. After playing six seasons for Barcelona, Rakitic returned to his former club Sevilla in 2020. He won the 2006-07 Swiss Cup with his first club Basel and Europa League with Sevilla. After winning the Europa League with Sevilla, he transferred to Barcelona, where he achieved more success and won numerous club titles. As a Barcelona player, he won four La Liga titles, four Copa del Rey titles, one UEFA Champions League title, two Supercopa de Espana, one UEFA Super Cup, and one FIFA Club World Cup.

On the international level, he initially represented Swiss youth teams and later chose Croatia. He made his senior international debut with Croatia in 2007. He was a key part of the Croatian team that finished runner-up in the 2018 FIFA World Cup. He was named Croatian Footballer of the Year and Croatian Sportsman of the Year in 2015.

He has over 17.5 million followers on his

What is Ivan Rakitic Famous for?

Where is Ivan Rakitic From?

Ivan Rakitic was born on 10 March 1988. His birthplace is in Rheinfelden in Switzerland. He was born to Croatian parents in Switzerland. Thus, he initially played football for Switzerland’s youth football teams, but later chose Croatia to play senior international football. He holds Croatian nationality. Born in Switzerland, he also holds Swiss nationality. He possesses dual-citizenship. He was born to a mother, Kata Rakitic, and a father, Luka Rakitic. He has two siblings, Nikol and Dejan. He belongs to white ethnicity and his religion is Christianity. His zodiac sign is Pisces.

Ivan Rakitic is a married man. He is married to Raquel Mauri. The couple first met at a hotel bar on the first night Rakitic arrived in Seville in 2010. She was working as a waitress there. They eventually started dating in 2011. They got married in April 2013. Their first daughter Althea was born in July 2013. His second daughter Adara was born in May 2016.

Ivan Rakitic stands at a height of 1.84 m i.e. 6 feet and half inches tall. He has a bodyweight of 172 lbs i.e. 78 Kg. He has an athletic body build. His sexual orientation is straight. His eye color is green and his hair color is blonde.

Ivan Rakitic earns from his professional career as a football player. His income comes from contracts, salaries, endorsements, and bonuses. His annual salary at Barcelona was around $12 million. His net worth is estimated at $30 million.

Our contents are created by fans, if you have any problems of Ivan Rakitic Net Worth, Salary, Relationship Status, Married Date, Age, Height, Ethnicity, Nationality, Weight, mail us at [email protected]