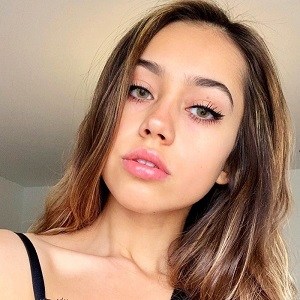 Ivanita Lomeli is an American Instagram Star, Youtuber, TikTok star, and social media personality. She is well known for her social media account and as a unique content creator.

How old is Ivanita Lomeli?

Ivanita Lomeli was born on October 25, 1997, in Virginia, United States. As of 2020, her age is 22. Her zodiac sign is Scorpio and holds American citizenship. Her ethnicity is Caucasian.

Talking about her parents, they belong to Tototlan, Jalisco, Mexico ancestry. Later, they moved to the United States. She has not revealed her parent’s identity yet. But, she visited them from time to time.

Besides, she has one older brother and a sister, Shamy. They both are already featured on her youtube videos.

How did Ivanita Lomeli pursue her Career?

From 2017, Ivanita Lomeli started her journey on Instagram. Now, she has over 1.1 million followers on it. She has gained a massive fan following because of her beautiful and creative images as well as short videos. In Dec 2017, she upload a picture with gymnast Demi Adriano.

On June 27, 2018, she opened a Youtube channel. She has posted her first video titled Slime Prank on Lucas and Markle and got millions of views. She uploads a video of her vlogging, pranks, food challenges. Because of her creative content on youtube, everybody loved her videos. Now, her channel reached over 4.6 million subscribers. She often came with her boyfriend together to make interesting content.

As a social media personality, she also active on TikTok where she has 4.9 million followers. She has almost crossed millions of views on her every video. She got this huge fan following through her lip-sync, dance, and creative videos.

Her height is about 5 feet 3 inches and weight is around 45 kg. She has Hazel eyes and blonde hair.

How much is Ivanita Lomeli worth?

As of 2020, Lomeli’s estimated net worth is approximately $1.5 million. Her exact salary and average earning are unknown. but, As a YouTuber and TikToker, her earnings ranges are between $4.5 K – $72 K and $2.9 to 4.9 k respectively. Besides, she is an Instagram model and her average estimated earning per post is $5 k.

Who is Ivanita Lomeli dating?

Currently, Ivanita Lomeli is dating a YouTuber Lucas Dobre. They are in a relationship since 2018. She looks very happy to be on his side. She also shared many Pictures with Lucas through her social media account. They collaborate and make different kinds of creative videos for their fans and followers.

Our contents are created by fans, if you have any problems of Ivanita Lomeli Net Worth, Salary, Relationship Status, Married Date, Age, Height, Ethnicity, Nationality, Weight, mail us at [email protected]