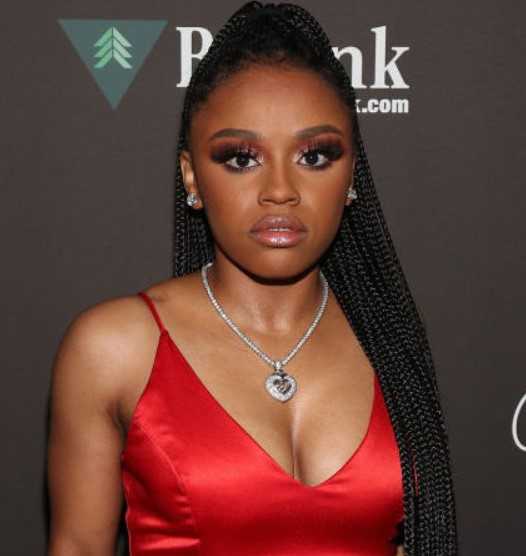 Iyanna Mayweather is an adult popular girl who is best recognized as the daughter of American boxing legend Floyd Mayweather Jr. Iyanna made headlines all over the internet when she was gifted 18-carat “Canary Pristine” ring, worth $5 million by her dad. She also received a Mercedes 550 S-Class to go along with her G-Class for her 14th birthday where Justin Bieber sang. Besides, Iyanna has marked her presence as a social personality with over 500k followers on her Instagram.

On April 4, 2020, Saturday morning, Iyanna was arrested after stabbing her boyfriend, rapper NBA Youngboy’s baby mama, Lapattra Lashai Jacobs after the two were involved in a physical confrontation in their home. The incident took place at Youngboy’s home where he and Jacobs were present and after while Jacobs and Mayweather went on for argument that reached up to the kitchen and eventually ended up stabbing a knife at the back of Jacobs and is in critical condition right now.

Iyanna was charged with assault with a deadly weapon however, on April 5, 2020, she was discharged with a fine of around $37k. The incident reached all over the internet and pop star and rapper, Kodak Black alleged Youngboy to have cooperated with the police about Yaya’s stabbing incident.

Youngboy and Black are in a clash on social media sites these days. Previously, she was involved in a fight as back in February, her action of hitting one of Youngboy’s girls was captured in CCTV camera.

What is Iyanna Mayweather Famous for?

Where was Iyanna Mayweather Born?

Iyanna Mayweather was born on May 20, 2000, in Nevada, Las Vegas, United States. Her birth name is Iyanna Mayweather. Her nationality is American. Mayweather belongs to mixed ethnicity while Taurus is her zodiac sign.

Iyanna Mayweather was born in a well-to-do family to the boxing legend, Floyd Mayweather Jr and his former girlfriend, Melissa Brim. Her father, Floyd is widely considered the greatest boxer of his era and as one of the best pound-for-pound fighters in history.

While her mother, Melissa is a businesswoman and a television star. However, her parents never got married and are separated. She also has a half-brother from her mother’s side, Devion.

Iyanna is one of the four children of his father Floyd, as she has three half-siblings: two half-brothers, Koraun Mayweather and Zion Mayweather, and a younger half-sister, Jirah Mayweather, who was born to Floyd’s former girlfriend, Josie Harris. Even after they are separated, Floyd as a father never fails to surprise his children on their special days.

Iyanna graduated high school at the age of 15 and then received a diploma certificate at the age of 18. After her graduation, she moved on to be a social personality. Besides, she was also seen along with her father at his training centers.

Iyanna Mayweather is not only known for her father’s popularity but also for the expensive gifts that she receives on her birthdays. Her birthday comes with a headline on the internet every May 20. On her 18th birthday, she was gifted with a huge 18-carat “Canary Pristine” ring worth $5 million by her dad, Floyd. Her birthday parties come with a blast like a star-studded birthday party.

On her 16th birthday, along with expensive gifts, she was surprised by the performances of popular singers including Drake and Future at the Mirage Hotel in Las Vegas. One of the early expensive gifts that Iyanna received was a Mercedes 550 S-Class and a G-Class on her 14th birthday, where the Canadian singer, Justin Bieber had performed.

Iyanna Mayweather started her career as a social media personality at her teenage posting her stylish photos and videos. Professionally, she released a music video titled “Oh Okay Remix” in October 2018 on her YouTube channel. Her video and rapping style of her received multiple mixed reviews.

Talking about her social media presence, she is active on Instagram with over 770k followers on her Instagram account. She joined a YouTube channel on June 20, 2018. Besides, she signed a partnership with the famous clothing company, “FashionNova”,  and she regularly posts adverts of herself wearing the company’s clothing.

Who is Iyanna Mayweather Dating?

Iyanna Mayweather has a turn on and off relationship with rising superstar rapper, NBA Youngboy. They were previously linked and had a fling with each other. Youngboy has 5 children at the age of 19 and is allegedly plagued with STDs.

Recently, on April 2, 2020, she got involved in a fight using a deadly weapon to one of the Youngboy’s girls, where she alleged to be his fiancee. She was arrested the same day for her criminal action.

How Much Does Iyanna Mayweather Earn?

The 19 years old Iyanna Mayweather has just started her career which allegedly means her net worth from her own work isn’t too much. However, being the daughter of boxing legend, Mayweather must have a net worth ranging around $1-5 million.

Her income is the money that comes from her parents’ income. Her father, Floyd himself has an estimated net worth of over $700 million.

How Tall is Iyanna Mayweather?

Iyanna Mayweather is a gorgeous lady in her early adulthood. Mayweather has a well maintained slim body physique of measurement 32-23-32 inches. She stands tall with a height of 4ft. 11inch.(1.5m) while her body weighs around 52kg(114 lbs). Her bra size is 32 C. She has a dark complexion with black hair and dark brown eyes.

Our contents are created by fans, if you have any problems of Iyanna Mayweather Net Worth, Salary, Relationship Status, Married Date, Age, Height, Ethnicity, Nationality, Weight, mail us at [email protected]