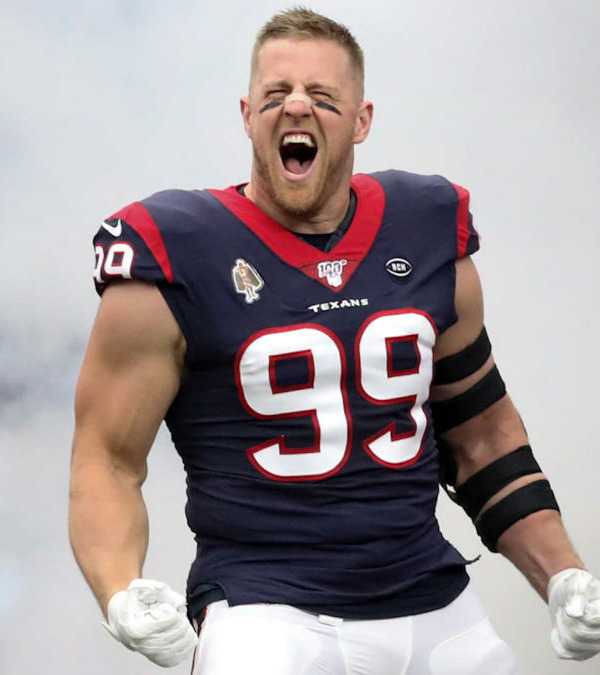 Justin James Watt, professionally known as J.J. Watt is an American football player. He plays as a defensive end and occasionally plays as a defensive tackle. He currently plays for the Houston Texans of the National Football League (NFL). The Texans drafted him 11th overall in the 2011 NFL Draft. Prior to his professional career, he played college football at the University of Wisconsin.

He has over 3.8 million followers on his official

What is J.J. Watt Famous For?

Where was J.J. Watt Born?

J.J. Watt was born on 22 March 1989. His birth name is Justin James Watt. His birthplace is in Waukesha, Wisconsin in the United States. He holds an American nationality. He was born to a father, John Watt, and a mother, Connie Watt. He has 2 younger siblings, Derek Watt, and T.J. Watt.

He started playing ice hockey at the age of 4. He played hockey until 13. Due to financial reasons, he quit playing hockey. He also started playing football at an early age. He later became passionate about football while he was studying in grade 5.

He attended Pewaukee High School. At Pewaukee, he excelled in football, basketball, baseball, and track and field as well. He earned first-team All-state selection in the shot put during his senior season at high school. He set a school record with a throw of 59 ft, 11.5 inches, capturing the state title at the 2007 WIAA Division II Championship. In Football, he received several accolades during his senior year at the high school such as Woodland Conference Player of the Year, first-team All-State, All-County, All-Area, and All-Conference selections.

Upon completing his high school, he committed to play college football at Central Michigan University on a scholarship. He played as a tight end at the University.

He played 14 games at Central Michigan and compiled 77 receiving yards and 8 receptions.

He forgo his scholarship to transfer to the University of Wisconsin-Madison. He redshirted the 2008 season. He played as a defensive end at Wisconsin.

He forgo his senior season to enter the 2011 NFL Draft.

What are J.J. Watt College Achievements?

He made his NFL debut against the Indianapolis Colts. He finished his rookie season with 48 solo tackles, 8 assisted tackles, and 5.5 sacks. The Texans qualified for the playoffs for the first time in franchise history through Watt’s rookie season.

Ahead of the 2014 season, he signed a 6-year contract extension with the Texans worth $30.9 million. With the new contract extension, he was the NFL’s highest-paid non-quarterback based on average yearly salary.

He battled with injuries during the 2015 season but started all 16 games. He compiled 76 tackles, 17.5 sacks, 8 passes defended, 3 forced fumbles, and a fumble recovery.

His 2019 season was affected due to injury sustained in the Week 8 game against the Oakland Raiders. He returned into action in December 2019.

What are J.J. Watt NFL Achievements?

Most career forced (22) and recovered fumbles (12)

Who Is JJ Watt married to?

J.J. Watt is currently dating professional soccer player Kealia Ohai. The couple started dating in 2016. The got engaged in 2019.

What is JJ Watt Net Worth?

J.J. Watt earns from his professional football career in the NFL. His income comes from salary, contracts, bonuses, and endorsements. He became the NFL’s highest-paid non-quarterback based on an average yearly salary after he signed a contract extension worth $30.9 million with the Texans ahead of the 2014 season.

Besides football, he was named the Vice-President of Power Relations for Reliant in 2015. As of 2019, his net worth is estimated at $10 million.

Our contents are created by fans, if you have any problems of J.J. Watt Net Worth, Salary, Relationship Status, Married Date, Age, Height, Ethnicity, Nationality, Weight, mail us at [email protected]