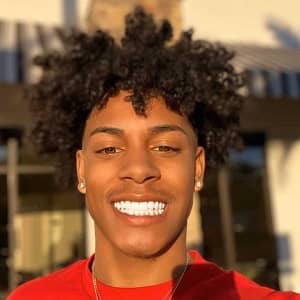 Jaaaydamenace is a popular American social media personality. He is well known on Tiktok thanks to the entertaining content he posts on his account.

Jaaaydamenace, real name Jaden Shaw, was born on the 5th of December, 2001 in the U.S. As of now, his age is 19. His nationality is American but he has not revealed his ethnicity as of now.

Jaden keeps a low profile when it comes to his personal life. As such, he has not revealed anything regarding his parents and most of his childhood is shrouded in mystery. But he has revealed that he has a younger brother, who appears on his Youtube videos occasionally. But Jaden has not revealed his brother’s name as well.

Talking about his education, Jaden is a high school graduate. He graduated on the 8th of May 2020, and currently, he is deciding whether he should attend college or not. Though he did share details on his graduation, Jaden has not shared which high school he graduated from.

How did Jaaaydamenace rise to fame?

Jaaaydamenace gained massive popularity on the internet thanks to Tiktok. On the platform, his account @jaaaydamenace has gathered over 800k followers and over 17 million likes as of now. His entertaining Tiktok dances, lip-syncs, and comedy videos have all helped him grow his channel in a short amount of time. Jaden also has a lot of self-confidence and his videos show it well. His videos also often feature him and his friends just having fun and are very entertaining to watch. Some people may find him cocky and call him a showoff and while he does flex, he has a really nice personality as well.

Aside from Tiktok, Jaden also has a Youtube channel named Jaaaydamenace VLOGS. He isn’t very active on Youtube but even so, he has gained over 13k subscribers on the channel. He has only uploaded five videos which include pranks and an interview, along with a storytime about how he got pranked. Jaaaydamenace is also extremely popular on Instagram. His looks and confidence, along with his fashionable photos and photos of him flexing have gotten him a lot of followers. As of January 2021, Jaden has over 202k followers on his @jaaaydamenace Instagram account.

What is Jaaaydamenace’s net worth?

Jaaaydamenace has not shared the details on his net worth and annual salary as of now.

What are Jaaaydamenace’s physical statistics?

Jaden stands at a height of 5 feet 9 inches and his weight is roughly 63 kilograms. He is also blessed with good looks and has a fit physique. Likewise, his eyes are brown and his curly hair is black in color.

Jaaaydamenace is active and popular on social media. As of now, he has over 202k followers on Instagram and is on Snapchat under the username @official.jaaay.

Our contents are created by fans, if you have any problems of Jaaaydamenace Net Worth, Salary, Relationship Status, Married Date, Age, Height, Ethnicity, Nationality, Weight, mail us at [email protected]