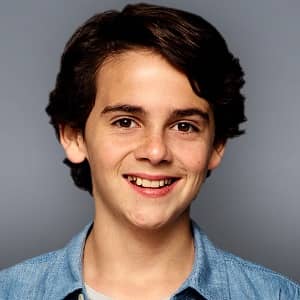 Jack Dylan Grazer is an actor from America who is mostly known for his performance in the movie version of ‘Stephen King’s novel ‘It.’ The movie turned out to be his first major studio film. He was even starred in the CBS series Me, Myself, and I, potraying the role of Young Alex.

How old is Jack Dylan Grazer?

Jack Dylan was born on September 3, 2003, in Los Angeles, California, United States, and is currently 17 years old. Talking about the star’s family, he was born to father Gavin Grazer and mother Angela Lafever. About the parents’ background, he comes from a family with deep film production and acting roots. His father is a film director and an actor while his uncle Brian Thomas Grazer is a renowned film producer in Hollywood.

He grew up with a younger brother named Bowie Gavin Grazer. Academically, there is no information regarding his educational qualifications. Alongside acting, he also enjoys boogie boarding, surfing, creative writing, and scriptwriting.

How did Jack Dylan rise to stardom?

Jack Dylan Grazer was exposed to the entertainment world from early childhood and he was encouraged to pursue acting. He began his career by acting in some commercials. According to several records, he debuted in an amateurish performance when he was in elementary school.

As his performance was recognized by big eyes, his parents and uncle greatly supported him. It was the year 2014 when he made his television series debut in The Greatest Event in Television History playing as the son of the main character. When he turned 13, he performed as Kayden Aukerman in Comedy Bang! Bang! by Benjamin Berman. In 2015, he was featured in Tales of Haloween which was a horror-comedy genre movie.

Later, his role of ‘Eddie Kaspbrak’ in the film ‘It,’ and that of ‘Young Alex Riley’ in TV comedy series ‘Me, Myself and I,’ earned him a lot of appreciation.

What is the net worth of Jack Dylan?

Being a 17-year-old star, Dylan has accumulated a lot of cash at such a young age. According to various media sites such as Celebrity net worth, Jack Dylan Grazer has accumulated a net worth of about $500,000. He makes most of his work as a full-time professional actor and brand endorsement.

How tall is Jack Dylan?

The handsome movie star stands tall at a decent height of 5 feet 6 inches and weighs about 61 kilograms. Moreover, his body measurements are yet unknown to the public domain. Additionally, he has a pair of dark brown eyes and has brown hair. His good looks and cute smile just adds up to his charming personality and compliments it even more.

Who is Jack Dylan Grazer dating?

Talking about Dylan’s personal life and love interest, he has not given any insights about his personal life. There is nothing on his social media as well that might hint at the issue. Likewise, he is single at the moment and enjoying his single life. About his love history, the 17-year-old star dated Ellie Hiyar in 2017.

To date, the actor has won over two nominations and four wins so far. In 2019, he was nominated for a Saturn Award for Best Performance by a Younger Actor for the movie Shazam!. Following the same year, he was nominated for Best Supporting Actor for his role in It. Likwise, he won an award in the Best Ensemble Cast category for his work in It: Chapter Two. Fast forward in 2020, he won a Next Generation Award and an HCA award. Moreover, the star won an award in the Best-On-Screen Team category alongside other members of the cast for their work in It.

Our contents are created by fans, if you have any problems of Jack Dylan Grazer Net Worth, Salary, Relationship Status, Married Date, Age, Height, Ethnicity, Nationality, Weight, mail us at [email protected]