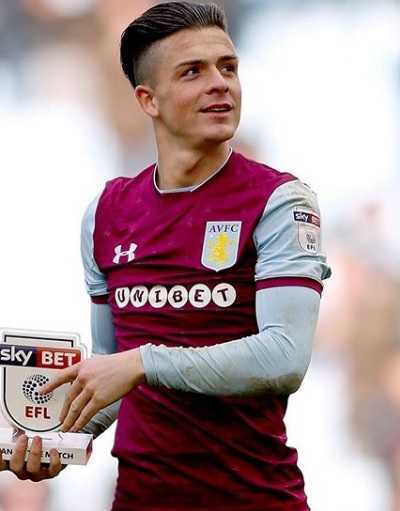 Jack Peter Grealish, professionally known as Jack Grealish is an English professional football player. He plays as a winger or as an attacking midfielder for Championship club, Aston Villa. He wears shirt number 10 for the club. Initially, he has represented the Irish national team at different age levels as he is eligible to play for Irish team from his mother’s side. He later decided to represent England. He has over 217k followers on his Instagram.

On 10 March 2019, A pitch invader ran towards the Aston Villa’s Jack Grealish just eight minutes into the Birmingham derby and punched him in the back of his head. The Birmingham fan ran straight towards Jack Grealish. The 23-year old midfielder, Grealish did not see him coming, as the invader came from behind.

The man has been arrested and charged with encroachment on to the pitch and assault and will appear in Birmingham Magistrates’ Court.

The same Jack Grealish’s only goal in the second half led Aston Villa to win their derby against Birmingham.

What nationality is Jack Grealish?

Jack Grealish was born on 10 September 1995. His birth name is Jack Peter Grealish. He was born to a father, Kevin Grealish, and a mother, Karen Grealish. He is of Irish descent through his maternal grandfather. His birthplace is in Birmingham, West Midlands in England. He holds English nationality. His zodiac sign in Virgo. He grew up in Solihull. He has four siblings, Keelan Daniel, Kiera, Holly, and Kevan.

He joined Aston Villa at the age of six.

As he is of Irish heritage, he played Gaelic football for John Mitchel’s Hurling and Camogie Club of Warwickshire GAA between the ages 10 and 14, where he competed against his school classmate, Aoife Mannion. He scored a point representing Warwickshire GAA at Croke Park during half-time of the 2009 All-Ireland Senior Football Championship quarter-final between Dublin and Kerry in August.

Who does Jack Grealish play for?

He joined Aston Villa at a very young age. He was only 6 years old when he joined the club.

He was first named in the club’s senior team against Chelsea in the Premier League on in March 2012. He was an unused substitute.

He was part of the Aston Villa’s under-19 team that won the 2012-13 NextGen Series. He also scored in extra time in a win against Sporting CP in the semi-finals.

Aston Villa loaned him to League One club Notts County in September 2013 until January 2014.

He made his debut for Notts County on 14 September 2013 against Milton Keynes coming on in as a substitute.

He scored his first career goal against Gillingham at Meadow Lane on 7 December 2013.

Notts County extended his loan contract in January 2014 until the end of the season.

At the end of his loan spell with Notts County, he scored five goals and had seven assists in 38 appearances.

He returned to Aston Villa and made his senior team debut against Manchester City in the Premier League in May 2014.

He then played for the club in the Hong Kong Soccer Sevens.

He helped the club to win the Shield title finishing as top scorer with six goals in the competition.

Aston Villa renewed his contract signing a four-year deal with him in October 2014.

He was sent off for a second booking for diving in added time against West Bromwich Albion on 7 March 2015 in the FA Cup.

He played a key role for the club that reached the 2015 FA Cup Final. They were defeated by Arsenal 4-0 in the final at Wembley Stadium.

He scored his first goal for the club against Leicester City on 13 September 2015.

He once chose to stay in North West England and go clubbing after his club lost to Everton in November. The new manager, Remi Garde punished him by making him train with the club’s under-21 team.

He returned to senior team training the next month on 8 December.

Aston Villa rejected an inquiry by Leed United to take him on loan.

Aston Villa demoted from Premier League at the end of 2015-16 season.

Aston Villa opened an internal disciplinary investigation on Grealish in September 2016 after it was reported that he was at a party at a Birmingham hotel which had to be shut down by the police in the early morning.

He was suspended for three matches after accepting a charge of violent conduct following a stamp on Conor Coady of Wolverhampton Wanderers.

He was assaulted by a pitch invader on 10 March 2019 during the Second City Derby against Birmingham City. His only goal in the second half led the club to 1-0 victory against the Birmingham City.

The 27-year old man from Rubery was arrested and charged with encroachment on to the pitch and assault.

Though he was born in England, he was eligible to represent the Republic of Ireland from his mother’s side.

He was called up to an England U15 training camp but he was sent home after falling ill.

He then represented the Republic of Ireland from under 15 to under 21 national teams.

He declined the invitation from England to play in their under 17 team in 2011.

Republic of Ireland U21 team left him out for three qualifiers in October 2012.

The England FA then approached him to switch.

But, he chose to remain with the Irish team and represented their team in a friendly against the Faroe Islands in August 2013 and against Germany in 2014.

He pulled out of an Irish U21 team against Norway to focus on his English club.

He was awarded Under 21 player of the year by the Football Association of Ireland in March 2015.

He turned down a call-up to Irish senior team to play friendly against England and a European Championship qualifier against Scotland.

He confirmed on 28 September 2015 that he had decided to represent England at international level.

He made his debut for England U 21 team as a substitute in a 1-0 win over Portugal at the Toulon Tournament.

He scored twice in a 7-1 win over Guinea.

England went on to win the tournament for the first time since 1994.

He was also named in the England U 21 squad for the 2017 UEFA European U21 Championship.

2012 FAI Under-17 Irish International Player of the Year

2015 FAI Under-21 Irish International Player of the Year

Who is he Dating?

Jack Grealish is unmarried.  No rumors about his affairs have surfaced yet. He might be dating someone. He has managed to keep his personal life private. He is focused on his football career.

What is Jack Grealish’s Net Worth?

Jack Grealish is one of the aspiring football players for the English club Aston Villa and the English national team. However, he has yet to represent the England senior team. Football is his main source of income. His income comes from monthly wages, annual salary, bonuses, and endorsements. As of 2019, his net worth is under review.

Our contents are created by fans, if you have any problems of Jack Grealish Net Worth, Salary, Relationship Status, Married Date, Age, Height, Ethnicity, Nationality, Weight, mail us at [email protected]