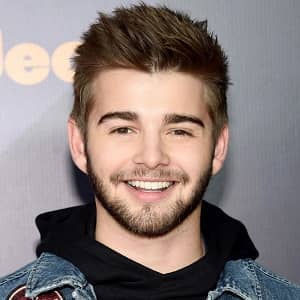 Jack Griffo is an actor and a singer from America. He made his first appearances in the television series Kickin’ It and Bucket & Skinner’s Epic Adventures. He is best known for his role as Max Thunderman on the Nickelodeon series The Thundermans. The actor is equally popular for his roles in Nickelodeon’s original movies Jinxed and Splitting Adam.

Jack Griffo was born on 11th December 1996 in Orlando, Florida, the USA as Jack Davis Griffo. As of 2020, his age is 23. He is American by nationality and his Zodiac sign is Sagittarius. Talking about his siblings, he has four siblings with whom he was raised.

Currently, there is not much known about his parents and their backgrounds. However, he is of mixed (English and Italian) ethnicity. Academically, there isn’t any information regarding his educational qualification.

How did Jack pursue his professional career?

Talking about the long journey of Jack Griffo’s career, the actor started appearing not earlier than 2011. He made his debut by starring the role of Benny in an American martial arts-inspired comedy television series Kickin’ It. After this, he made guest appearances in the shows ‘Bucket & Skinner’s Epic Adventures’, ‘See Dad Run’ and ‘Jessie’ from 2011 to 2013.

These appearances helped him to lead role in Nickelodeon’s The Thunderman. He then went on to win his first nomination for Kid’s Choice Awards for favorite TV actor in 2014.

Alongside his acting career, is a talented singer as well. He owns a self-titled YouTube channel where he posts covers of popular songs as well as his own singles. He released his debut solo single ‘Slingshot’ on this channel in November of 2013. Griffo had also released a single with his friend, Kelsey, in 2011 on the same platform.

What is the net worth of Jack Griffo?

Being a successful actor and singer, he has accumulated a net worth of $3 million. His brilliant performance in the entertainment industry is sure to make him earn a huge number. As an actor, he makes roughly about $15K-$20K Per Episode.

What is the height of Jack Griffo?

Jack Griffo stands tall at a decent height of 5 feet 9 inches and weighs about 69 kilograms. Jack is a very handsome person with a well-built body and a glowing face. His body features dark brown and a pair of beautiful dark brown eyes.

What is his relationship status?

Talking about the personal life and love life of the star, he is in a relationship with Paris Bereic who is a Filipino actress. The couple started seeing each other since the beginning of 2017. Before this, the star dated Kira Kosarin in 2012 and Ciara Bravo in 2013.

The relation with Bravo came off as a weak relationship and eventually broke up in the same year. Afterward, he went on to date Ryan Newman since 2013. Their relationship came to an end in 2016 due to some reasons and the reason is still a mystery.

Our contents are created by fans, if you have any problems of Jack Griffo Net Worth, Salary, Relationship Status, Married Date, Age, Height, Ethnicity, Nationality, Weight, mail us at [email protected]