Jack Hughes is an American professional ice hockey forward who currently plays for the New Jersey Devils of the National Hockey League(NHL). 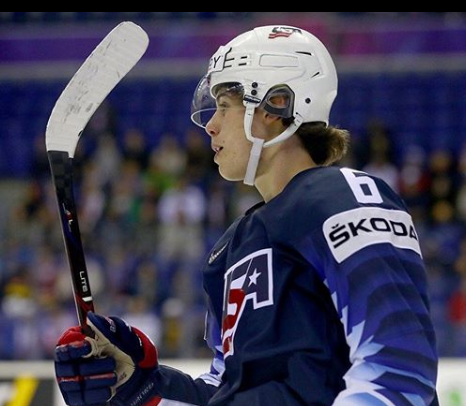 Dedicating your life to something, dedicating time to something, ending up achieving it and maybe doing better than that. Me personally, that would be a Stanley Cup. That's something I've dreamed of my whole life. I think that's why every hockey player at this level plays.

But I mean, I'm a confident kid. I want to be a kid that kind of drives the bus, doesn't just be a passenger.

You always dream of being number one. You don't dream of being two, three or four when you're a young kid. I want to be the first overall pick. I feel like that would be a dream come true if that happens.

Jack Hughes is an American professional ice hockey forward who currently plays for the New Jersey Devils of the National Hockey League(NHL). Hughes was taken as the top prospect in the 2019 NHL Entry Draft becoming the first Jewish player to be drafted No. 1 overall by the National Hockey League. Hughes also had earned a gold medal with the US U-17 side at the World U-17 Hockey Challenge. Hughes also has won the 2018 “Junior Player of the Year Award” as the top American-born junior hockey player.

What is Jack Hughes  Famous for?

When and Where was Jack Hughes Born?

Jack Hughes was born on May 14, 2001, in Orlando, Florida, United States. His birth name is Jack Hughes. His nationality is American. Hughes belongs to White ethnicity while Taurus is his zodiac sign.

Jack Hughes was born to a Catholic father, Jim Hughes and a Jewish mother, Ellen Weinberg-Hughes with a family background of ice hockey athletes. His father, Jim is a former hockey player who served as an assistant coach for the Boston Bruins, and the director of player development for the Toronto Maple Leafs.

While his mother, Ellen, played for the United States women’s national ice hockey team also had won a silver medal at the 1992 World Championship. Ellen was even inducted into the University of New Hampshire Athletics Hall of Fame in 2012.

Jack was raised in Mississauga, Ontario, though he was born in Florida along with his two siblings. Jack has an older brother, Quinn Hughes, a professional hockey player who was drafted as seventh overall in the 2018 NHL Entry Draft by the Vancouver Canucks and a younger brother Luke Hughes, who plays minor hockey for Little Caesars 15U AAA and on the U.S. National Development U17 Team during the 2019–20 season.

His uncle Marty, and his cousin, Teddy Doherty, were also both involved in ice hockey.

The 18 years old Jack Hughes is currently single. Hughes seems to be quite focused on his career than being with someone.

What is Jack Hughes’s Net Worth?

Jack Hughes has a well earning through his professional career as an NHL player. Hughes has managed to amass a great fortune of the amount in million dollars through his contracts and deals. Hughes enjoys his fortune to be around $3 million at the age of 18.

Hughes had signed a three-year contract worth $11 million with the New Jersey Devils in 2019. Hughes also adds more amount to his fortune through his family’s fortune.

How Tall is Jack Hughes?

Jack Hughes is a tall good looking guy with a great charming personality. Hughes has a well maintained athletic body physique. Being a hockey player, Hughes has been concern about his fitness and health thus building his body. Hughes stands tall with a height of 5ft. 10inch.(1.78m)while his body weighs around 77kg(170 lbs). Hughes has a fair complexion with light brown hair and green eyes.

Our contents are created by fans, if you have any problems of Jack Hughes Net Worth, Salary, Relationship Status, Married Date, Age, Height, Ethnicity, Nationality, Weight, mail us at [email protected]