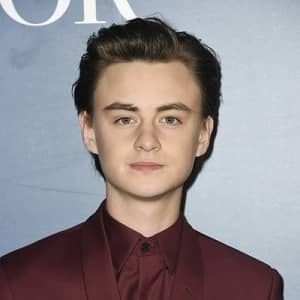 Jaeden Martell is a popular actor from America. He is quite popular for portraying the role of Bill Denbrough in the 2017 and 2019 film adaptations of the Stephen King novel It. He is equally recognized for the role of Jacob Barber in Defending Jacob, and Jacob Thrombey in Knives Out, respectively.

When was Jaeden Martell born?

Jaeden Martell was born on January 4th, 2003, in Philadelphia, Pennsylvania, U.S, and is currently 17 years old. He was born to parents Angela Martell and a renowned executive chef Wes Lieberher. Jaeden was born as the eldest of four kids, he grew up along with his two brothers and a sister.

Talking about his ethnicity, Jaeden is of mixed heritage as his grandmother was Korean while his father comes from German, English, Scottish, Irish, French-Canadian, and Belgian blood. The actor was only 8 years old when he moved to Los Angeles with his mother and so is the reason for his surname Martell.

How did Jaden Martell rose to stardom?

Since Jaden Martell was just 8 years old when he moved to LA, sooner later he auditioning for acting roles. According to him, his first roles were in commercials, including one in which he plays a kid who rounds up his friends to combat bullies in a Hyundai Santa Fe Super Bowl ad.

Later, he made his feature film debut with his birth name, Jaeden Lieberher in a starring role alongside Bill Murray, Melissa McCarthy and Naomi Watts in St. Vincent. It is known that he only played a role in a short film aside from his commercials during his early days. Jaeden even did six auditions for St. Vincent before landing the part. Jaeden landed his big role in Jeff Nichols’ Midnight Special.

It was the year 2015, Jaeden played Johnny Masters, the son of Dr. William Masters, on a seven-episode arc on the Showtime TV series Masters of Sex. Recently, he plays a teenager accused of murder in the Apple TV+ series Defending Jacob, opposite Chris Evans and Michelle Dockery as his concerned parents.

How tall is Jaden Martell?

Talking about the body features of Jaden Martell, the actor stands tall at a decent height of 5 feet 7 inches. Moreover, he has an average built body with a weight of about 55 kilograms. Additionally, his body features of black hair and a pair of dark blue eyes.

How much net worth does Jaden Martell hold?

Working his way up as a professional actor, he has made a fortune out of his career. The net worth of Jaden Martell is estimated to be about $4 million as of the year 2019. However, there is no record on his current net worth and earnings as his net worth has been increasing significantly since the past few years. Additionally, we are on the lookout on the update.

Is Jaden Martell in a relationship?

Currently, when Jaden is not working on the film set, he loves skateboarding and skiing and watching Philadelphia Phillies games. So as per his statement, he’s too young to be thinking about dating and just wants to enjoy his career.
However, during the premiere of It, rumors about Jaeden and Sophia Lillis began widely circulating, they were even called the young couple “the cutest couple of the year”. But the actor disagreed on the statement and is very single at the moment.

In the world of social media, Jaden has made a brilliant impression on several media sites such as Instagram, Twitter, Facebook, YouTube, and even TikTok. On Instagram, he goes by the username @jaedenwesley with a massive number of 3.5 million followers. Likewise, his official Facebook profile has garnered about 50k followers and his Twitter profile has about 315.4k followers. Additionally, his self-titled YouTube channel has amassed about 3.04k subscribers, as well as his TikTok profile, which has garnered 4.9k followers to date.

Our contents are created by fans, if you have any problems of Jaeden Martell Net Worth, Salary, Relationship Status, Married Date, Age, Height, Ethnicity, Nationality, Weight, mail us at [email protected]