Jake Arrieta is a famous American professional baseball player who currently plays as the pitcher for the Philadelphia Phillies of Major League Baseball(MLB). 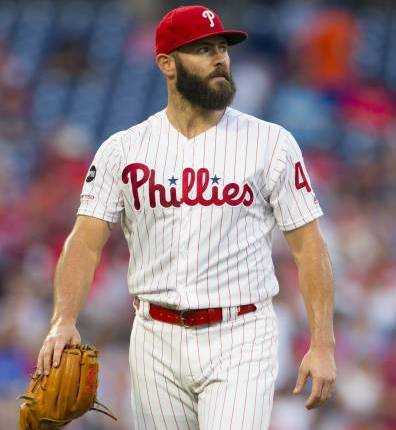 There's so many things running through your mind. If you can formulate a game plan that works for you and allows you to block outside distractions and get to what matters, that's how the talent is able to come out

It is good to kind of put your pride aside for the betterment of the ball club. We are all on board for that, even if you want to go another inning

Jake Arrieta is a famous American professional baseball player who currently plays as the pitcher for the Philadelphia Phillies of Major League Baseball(MLB). Previously, he has also played for the Baltimore Orioles and Chicago Cubs. He also won All-American pitcher of the year.

What is Jake Arrieta famous for?

When was Jake Arrieta born?

Jake Arrieta was born on 6th March 1986 in Farmington, Missouri, US. His birth name is Jacob Joseph Arrieta. American is his nationality. His ethnicity is Puerto Rican. Pisces is his zodiac sign.

He was born to Lou Arrieta(father) and Lynda Arrieta(mother). He has no siblings. He was raised in Plano, Texas. He did his schooling at Plano East Senior High School. He played baseball for his high school team.

He attended Weatherford Junior college though he got selected by the Cincinnati Reds in the 2004 draft. Then, he attended Texas Christian University and he started playing for TCU Horned Frogs baseball team. He won the Mountain West Conference Pitcher of the Year Award in 2007.

He pitched six innings in Team USA’s victory against China’s National baseball team at the 2008 Olympics.

Who is Jake Arrieta married to?

The American baseball player, Jake Arrieta is married to Brittany Arrieta. They tied the knot on 10th December 2011. The couple is blessed with a son, Cooper, and a daughter, Palmer. His family currently resides in Austin, Texas.

What is the net worth of Jake Arrieta?

The American baseball player, Jake Arrieta has an estimated net worth of $20 million USD as of 2019.

He has an annual salary of $10 million USD in 2019. His worth includes all his property and his present earnings from the club.

How tall is Jake Arrieta?

He has a fair complexion with brown hair and dark brown eyes. He also has tattoos on his body.

Our contents are created by fans, if you have any problems of Jake Arrieta Net Worth, Salary, Relationship Status, Married Date, Age, Height, Ethnicity, Nationality, Weight, mail us at [email protected]