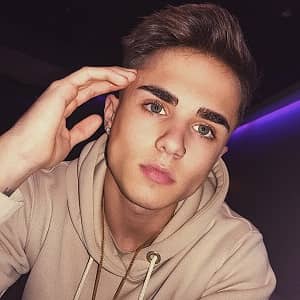 Jake Mitchell is an English Youtuber. He posts vlogs, lifestyle, challenges, pranks, and other interesting content on his self-titled Youtube channel which has over 1.82 million subscribers.

What age is Jake Mitchell?

Jake Mitchell was born on January 12, 2000, in Hereford, England. As of 2020, his age is 20. He was born to parents Rob Mitchell (father) and Sue Mitchell (mother). He also has a sister named Eloise who has made several appearances in his videos. His father, Rob is the reason he is a Youtuber now as he ran a channel in which Jake first uploaded videos when he was young.

Initially, he had no intention of being a Youtuber but the platform gave him the opportunity to communicate with the world with a wider audience and he got to showcase his videography talents. Before he had even realized, he started earning a huge amount of money and turned into a Youtube sensation by the age of fifteen. His ethnicity is English.

Jake Mitchell started making videos when he was just 8 eventually learning to add sound and music to the videos to make it more impactful. Initially, he used his dad’s computer and Youtube channel. He started off by putting together a series of pictures creating a meaningful story and then uploading the edited pictures.

At the age of 17, he started making short films which later gained fame and success as a talented young filmmaker. On June 27, 2013, he created his self-titled Youtube channel using it to upload movies showcasing his talents and skills in filmmaking. In September 2014, he uploaded a video interviewing Casper Lee. In 2015, he uploaded a video with his parents titled ‘Annoying Things Parents Do’ which a large audience found ‘relatable’ and went viral among youngsters.

His video, ‘Getting my First Tattoo’ is his most popular one with over 10 million views. Some of his other popular videos include ‘Balloon Challenge’, ‘British Trying American Candy’, ‘Annoying Things About Being a Boy Teenagers’, ‘Type of Girlfriends (Then and Now)’, ‘Rainbow Milk Challenge’, etc.

As of July 2020, more than seven years after he made his Youtube channel, Jake has over 1.82 million subscribers. Moreover, his videos have gathered more than 176 million views in total.

What is the Net Worth of Jake Mitchell?

As of 2020, Jake Mitchell has an estimated net worth of around $200k. His main source of income is Youtube and selling merchandise. In a day, his channel gets over 250,000 views generating an estimated revenue of around $450 per day which makes around $165k per year. Still very young, Jake’s channel and his net worth are both expected to grow in the coming years.

How tall is Jake Mitchell?

Mitchell stands at a height of 5 feet 6 inches and weighs around 60 kg. He has brown hair and a pair of green eyes.

Is Jake Mitchell dating anyone?

Jake is currently single and not dating anyone. Previously, he was in a relationship with the YouTuber, Saffron Barker since February 2015 and had given the name ‘#Jaffron’ from themselves. The couple seemed to be very much in love and featured in each other’s videos regularly. However, due to some reasons, they broke up and since then, Jake has not dated anyone openly.

The young English Youtuber is active and unsurprisingly, very popular on social media sites. He has around 114k followers on Facebook and around 615k followers on Twitter. Similarly, his Instagram account has more than 460k followers.

Our contents are created by fans, if you have any problems of Jake Mitchell Net Worth, Salary, Relationship Status, Married Date, Age, Height, Ethnicity, Nationality, Weight, mail us at [email protected]