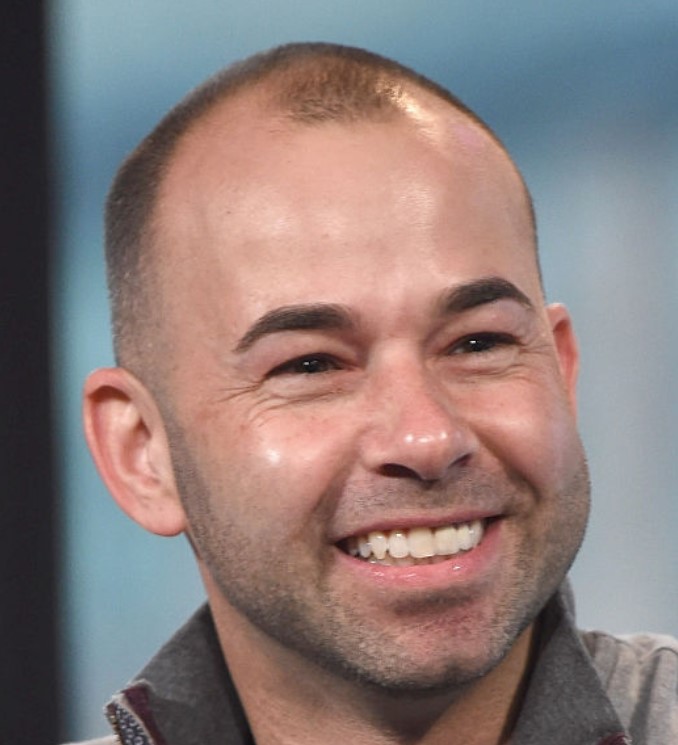 James Murray is an American improvisational comedian, actor, author, and producer, who is well-known as one of the founding members of the popular comedy group titled “The Tenderloins”. The group got their break after they won the $100k worth grand prize in NBC’s “It’s Your Show” competition for the sketch “Time Thugs”.

Along with his popular comedy troupe, Murray stars in a hidden camera reality show, “Impractical Jokers”. The show has garnered over million viewers which began to air on TruTV since 2011. He has also appeared in movies such as “My Brother the Time Traveler” and “12 Monkeys”. On February 21, 2020, a reality comedy film titled “Impractical Jokers: The Movie” was released starring Murray and other members of “The Tenderloins”.

Not only his comedy has got him headlines but also his personal life as recently on September 25, 2020, Murray, 44 caught the headlines following his wedding with fiance, Melyssa Davies, 25 despite the age gap of almost 19 years. Davies frequently appears on Murray’s social media platforms especially on his verified Instagram: @therealmurr with over 1.4 million followers.

What makes James Murray so well-known?

As a member of the comedy troupe “The Tenderloins,” he is well-known.

He’s best known for his role on “Impractical Jokers.”

Where did James Murray get his start?

James Murray was born in Staten Island, New York City, New York, United States, on May 1, 1976. James Stephen Murray is his given name. Murray is of White descent, and his zodiac sign is Taurus.

James Murray, who is of Irish descent and was born and raised in the city of Staten Island, had a happy childhood and only has fond memories of his youth. Christine Murray and Danielle Murray were his sisters when he was growing up.

He went to Monsignor Farrell High School in his hometown, where he met Joe Gatto, Brian Quinn, and Sal Vulcano, his future comedy partners, in their freshman year. During his high school years, he was also a member of the Improvisation Club.

After graduating from high school in 1994, he enrolled at Georgetown University in Washington, D.C., where he earned a bachelor’s degree in English. Murray and his high school friends started their career as a comedy troupe soon after graduation.

In 1998, James Murray started his career by writing, directing, and producing the film “Damned!” The film was a retelling of the Bible in a different way.

Murray founded an improv and sketch comedy troupe called “The Tenderloins” in 1999 with his friends Joe Gatto, Brian Quinn, and Sal Vulcano.

The Tenderloins started making comedy sketches together and posting them on YouTube, MySpace, and Metacafe, where they eventually racked up over a million views.

The troupe started performing on the hidden camera reality show “Impractical Jokers,” which debuted on TruTV on December 15, 2011, nearly four years later. The show drew more than 32 million viewers in its first season.

After almost eight years on the air, the show has risen to become TruTV’s most successful series. Murray has established himself as a well-known celebrity as a result of the show.

Murray and the other Tenderloins members appeared in the game show “The Misery Index” in 2019.

Murray and other members of “The Tenderloins” starred in the reality comedy film “Impractical Jokers: The Movie,” which was released on February 21, 2020.

Melyssa Davis, James Murray’s lovely girlfriend, is his wife. Davis is a lovely American lady in her mid-twenties with whom Murray, who is in his forties, has fallen in love and agreed to live together right now. Davies, who was born on March 13, 1995, in Pennsylvania, and is currently 25 years old and just finished nursing school, fell in love with Murray when they met for the first time in June 2018 in New York City at Murr’s book launch party for “Awakened.”

They immediately connected and struck up a conversation, in which James gave her his phone number so they could get to know each other better. “We had instant chemistry, and our relationship was instantly different from any other I’ve had in my life,” he remembered.

Soon after, the pair went on their first date in New York City, at Murr’s favorite restaurant, Buddhakan, and experienced overwhelming romanticism. The pair knew they were made for each other after just a few months of dating and getting to know each other, and they took their first holiday together in February 2019.

Murray has also expressed his admiration for Davies, saying, “Melyssa is the best thing that’s ever happened to me.”

Murray married Jenna Vulcano, the sister of his friend Sal Vulcano, as a stunt for Unrealistic Jokers in his first marriage. Despite the fact that the couple married happily, the marriage was annulled the night after the honeymoon as a joke on Sal. The marriage was like an out-of-the-blue phenomenon that wasn’t at all healthy.

The Wedding of James Murray and Melyssa Davis!

“Best day of my life,” Murray wrote on Instagram, confirming the exciting news. Later, he clarified his delight, saying, “I planned a get-together with champagne and a game of Scrabble. There were no documents to sign, so I took her there to sign ‘archives’ [about the house]. Yes, she said “.. He murmured as well “As a result, I was able to show her a video of 40,000 or 50,000 people asking her to marry me. It’s fans from all over the world, including Comic-Con “..

Melyssa married Murray, his caring fiance, on September 25, 2020 at the Lake House Inn in Bucks County, Pennsylvania. Murray’s mates from “Impractical Jokers,” Sal Vulcano, Brian Quinn, and Joe Gatto, acted as best men for Murray at a private wedding attended by a few relatives and family members. Since the COVID-19 pandemic had disrupted so much of the couple’s wedding plans, they were forced to settle for a guest list that was just a quarter of the initial.

They’ve also announced that they’re going on a two-week honeymoon to Soneva Jani in the Maldives. In addition, the couple was featured in Sophisticated Weddings magazine’s September issue!

What is James Murray’s net worth?

James Murray’s professional career as a comedian and actor has rewarded him well. Murray has certainly amassed a healthy fortune from his decade-long career, having taken the first step forward in his career in 1999. He and his comedy troupe, “The Tenderloins,” have also appeared on the hit show “Impractical Jokers,” which has increased his net worth.

Murray also makes money through his books and social media platforms. His net worth is estimated to be around $5 million, including his earnings.

What is James Murray’s height?

In his 40s, James Murray is a good-looking guy with a charming personality. Murray has won millions of hearts all over the world with his hilarious sense of humour and flawless comedy timing. He stands at 5ft 11inches (1.8m) tall and weighs about 78kg (172 lbs). With his blad hair and hazel eyes, he has a medium skin and an average body physique.

Our contents are created by fans, if you have any problems of James Murray Net Worth, Salary, Relationship Status, Married Date, Age, Height, Ethnicity, Nationality, Weight, mail us at [email protected]