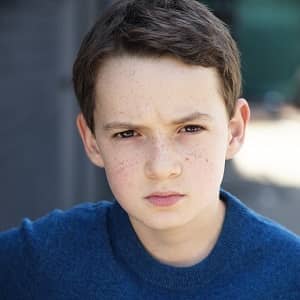 Jason Maybaum is a popular American child actor. He gained fame at an early age for his appearances on Disney’s Raven Home series and Disney musical Freaky Friday.

When was Jason Maybaum born?

Jason Maybaum was born on the 31st of August 2007 in Los Angeles, California, U.S.A. As of 2020, he is just 13 years of age. His nationality is American and his ethnicity is Caucasian.

As for his parents, information on his father is not available. But we do know that his mother is named Laurie and acts as his manager. His family supports him in his career and are a major reason as to how he has made it so far so early.

Jason is currently attending a local school near his home in L.A. He has not revealed the name of his school as of yet.

How did Jason Maybaum start his career?

Jason started his acting career at the young age of 7. He started by appearing in commercials and then moved on to minor roles on TV. He starred in two episodes of Blunt Talk in 2015 and later that same year, he appeared on The Perfect Stanleys. These roles gave him a bit of traction in the industry and he got more offers. Later, in 2016, Jason was cast as Bratty Son in the sitcom Workaholics. \

He also appeared on Glenn’s Kids and Superstone before he got his breakout success with Raven’s Home. This Disney series launched him into fame and his talent was recognized in the industry. He even won his first award for this role.

After this Jason appeared in a handful of movies and TV shows such as Desperate Waters, Teachers, Bitch, etc. He has also starred in a handful of music videos in his career. Another major role for Jason came in the Disney musical Freaky Friday. In this movie, he starred alongside other great child actors and was able to improve his acting skills. Aside from all this, Jason also participated in the dance show, Dancing With The Stars: Junior.

What is Jason Maybaum’s net worth?

As of 2020, Jason has an estimated net worth in the range of 500k to 1 million dollars. All of this has been earned through his acting career. He has not revealed his annual salary as of yet.

What are the physical statistics of Jason Maybaum?

Jason currently stands at a height of 4 feet 2 inches and weighs around 30 kilograms. He is still growing and so his height and weight are constantly changing. As of now, he has a slim physique with dark brown hair and dark brown eyes.

Who is Jason Maybaum dating?

Jason is currently single as he is still too young. The actor is just 13 at the moment and isn’t in a relationship and hasn’t had any past relationships.

Even at his young age, Jason has quite a presence on social media. Currently, he is active on Facebook, Instagram as well as Twitter. He frequently posts updates on his private and professional life on the platforms. And due to his endearing personality and talent in acting, he has amassed over 8k followers on Facebook and Twitter and over 481k followers on Instagram.

Our contents are created by fans, if you have any problems of Jason Maybaum Net Worth, Salary, Relationship Status, Married Date, Age, Height, Ethnicity, Nationality, Weight, mail us at [email protected]