Jaxson Hayes is an American professional basketball player for the New Orleans Pelicans of the National Basketball Association (NBA). 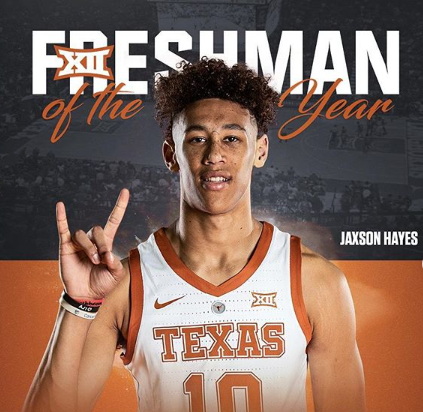 Jaxson Hayes is an American professional basketball player for the New Orleans Pelicans of the National Basketball Association (NBA). He played college basketball for the Texas Longhorns. Hayes set a new single-season school record for field goal percentage and ranked third in the Big 12 in blocks per game, garnering second-team All-Big 12 honors. To learn more about the basketballer, read below.

Who are the parents of Jaxson Hayes?

Back to his early life, Jaxson was born to parents Jonathan Hayes and Kristi Hayes in Norman, Oklahoma. As per his racial background, he holds an American Nationality and belongs to an African ethnic group.

Hayes’s father, Jonathan Hayes, has played in the National Football League (NFL) and is now the Cincinnati Bengals’ tight-end coach. His mother, Kristi (Kinne), was a basketball player at Drake University (1991-95).

Regarding his education, Jaxson attended Moeller High School in Cincinnati, Ohio. He joined the University of Texas to play college basketball.

When did Jaxson pursue his basketball career?

Talking about his career, Jaxson began to play basketball from his school days.  He averaged 12 points, 7 rebounds, and 4 blocks per game as a senior. Later, he has committed to playing college basketball at the University of Texas.

As a freshman at Texas, Hayes averaged 10.0 points and 5.0 rebounds per game while shooting 72.8% from the field. He scored a career-high 19 points along with seven boards, two steals, and a block in a 69–56 loss to TCU. Hayes injured his left knee in a loss to Kansas in the Big 12 Tournament. He was named Big 12 Freshman of the Year. On April 11, 2019, Hayes declared for the NBA draft, forfeiting his remaining three years of eligibility.

Is Jaxson Hayes in a relationship?

Reflecting on his personal life, Jaxson is still in his teenage and just have started his playing career. Moreover, he is too young to get married. However, his immense popularity suggests that he might have a girlfriend but nothing is confirmed yet. Apart from his relationship status, he has a good relationship with his mother. He adores his mother a lot and spends most of his free time with her.

Exploring his social account, he posted a lot of pictures along with his mother, thanking her for everything she did to him. Also, he spends some of his quality time with his friends. Besides, he has also posted a photo with a girl named Camryn Olson who is a softball player at Hillsdale College. The photo is probably of the prom night.

In conclusion, we still don’t have any concrete information about his relationship status but we will be there with the information as soon as the news hit the market.

How Much Does Jaxson Hayes Earn?

Jaxson is a young college prospect who still has to take his place in the NBA. As per the reports, he doesn’t get a salary or pay from his college but gets a full ride to college.

The top prospect of the 2019 NBA draft earned around $8,864,040 as a base salary, according to the reports. He’s expected to earn the same amount with the reference after gets drafted.

Furthermore, a college basketball player specifically earns an average salary of $41,479 which ranges from $36,832 to $45,564. Moreover, the media still doesn’t have an idea about his assets such as houses and cars. Well, we have to be patient enough to know about the information until the 2019 draft.

How tall is Jaxson Hayes?

Talking about his physique, he stands at a height of 6 feet 11 inches and weighs around 120lb (100 kg). His other body information is yet to be disclosed. In the case of disclosure, we will let you know.

Our contents are created by fans, if you have any problems of Jaxson Hayes Net Worth, Salary, Relationship Status, Married Date, Age, Height, Ethnicity, Nationality, Weight, mail us at [email protected]