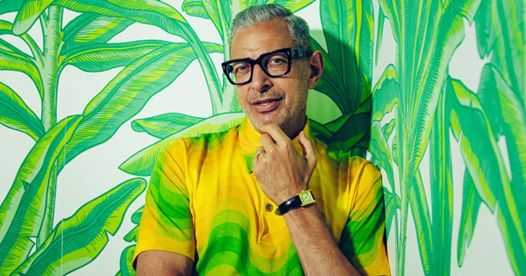 I love to be directed. They can trust me and go.

It's nice to play a character that has a soulful, dependent, close relationship. It must mean my character is interesting in some way.

I, uh, don't think I'm, y'know, so different than your average, y'know, average.

Jeff Goldblum is an American actor and musician who is named among the highest-paid actors in the world. Goldblum has starred in many of the highest-grossing films of his era including “Jurassic Park”(1993) and “Independence Day”(1996). Goldblum has also starred in several TV series, including the 8th and 9th seasons of “Law & Order: Criminal Intent” as Zack Nichols.

What is Jeff Goldblum Known as?

Where is Jeff Goldblum From?

Jeff Goldblum was born on October 22, 1952, in West Homestead, Pennsylvania, United States. His birth name is Jeffrey Lynn Goldblum. His nationality is Amerian. Goldblum belongs to Austrian-Jewish and Russian-Jewish descent. Libra is his zodiac sign.

Jeff was born to a Jewish family to Harold Leonard Goldblum(father) and Shirley Jane Goldblum(mother). His father was a medical doctor and major in the U.S. Army during World War II while his mother was a radio broadcaster who even had run a kitchen equipment and appliances sales firm back then. His parents were interested in show business. Jeff was raised along with his three siblings: two older brothers, Rick(died at 23 due to kidney failure) and Lee and a sister, Pamela.

Jeff was a member of an Orthodox synagogue and had a bar mitzvah ceremony in his childhood. He attended the Taylor Allderdice High School in Pittsburgh. He then joined Carnegie Mellon University to take drama classes with a dream to be an actor.

He had a passion for acting since his childhood. He moved to New York City at 17 to become an actor. Jeff worked on the stage and also studied acting at the Neighborhood Playhouse under the guidance of acting coach Sanford Meisner.

Jeff made his Broadway debut in the musical “Two Gentlemen of Verona” which earned a Tony Award. Besides, Jeff is an accomplished jazz pianist.

Who is Jeff Goldblum Married to?

Jeff Goldblum has been married thrice throughout his entire life. Goldblum first got married to Patricia Gaul. Gaul is an actress and together the couple had appeared in “Silverado”(1985). The couple got married in 1980 but soon after 6 years of marriage, the couple got divorced in 1986.

In 1987, he got married to his second wife, Geena Davis. Davis is also an actress and activist. Davis and Goldblum together have done three-movie, “Transylvania 6-5000”, “The Fly”, and “Earth Girls Are Easy”. The couple, however, divorced in 1990.

What is the net worth of Jeff Goldblum?

Jeff Goldblum has a great earning through his professional career as an actor. Goldblum has managed to amass a fortune worth million dollars through his several highest-grossing films and series and endorsement deals. Goldblum has an estimated net worth of $40 million. He is ranked to be one of the highest-paid actors.

Goldblum has his fashion line called “Jeff Goldblum Seduction”. He owes his fortune to smart stock investments, substantial property holdings, lucrative endorsement deals with CoverGirl cosmetics. He also owns several restaurants and even has launched his own brand of Vodka. With all the fortune in a million dollars, he must be living a lavish and luxurious lifestyle.

How Tall is Jeff Goldblum?

The 67 years old evergreen actor, Jeff Goldblum has quite a maintained slim body physique. Goldblum stands tall with a height of 6ft. 4inches(1.94m) while his body weighs around 89kg(197 lbs). Goldblum has a body measurement of 42-14-35 inches with 14 inches as his biceps size, 11(US) as his shoe size and 12(US) as his dress size.

Goldblum has a fair complexion with White-black hair and brown eyes.

Our contents are created by fans, if you have any problems of Jeff Goldblum Net Worth, Salary, Relationship Status, Married Date, Age, Height, Ethnicity, Nationality, Weight, mail us at [email protected]