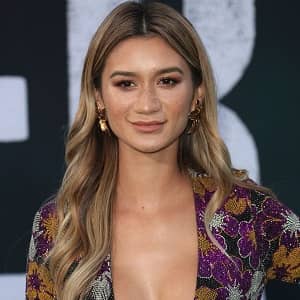 Jenah Yamamoto is a professional model, photographer, and blogger from America. She is mostly known for her massive following through on her popular travel blog Gypsy One. Jenah has worked with big-name brands like ADIDAS and even been featured in a variety of publications, including Complex and Acclaim.

How old is Jenah Yamamoto?

Jenah Yamamoto came to this world on April 4, 1993, in Hawaii, the United States. She is American by nationality, is currently 26 years old, and belongs to mixed ethnicity (Hawaiian, Japanese, and Puerto Rican descent). Talking about her childhood, she grew up on the North Shore of Oahu in Hawaii and later relocated to Los Angeles, California.

There is no information available on her parents, early life, or education. However, she was raised along with her sister Kiani Yamamoto who is an Instagram star as well.

How did Jenah Yamamoto rise to stardom?

Jenah is mainly a photographer by profession whose main focus is on travel photography and has a travel blog known as Gypsy One. Other than Jenah being a Tumblr blogger, she is now a model and a social media influencer as well who features attractive photos in exotic locations.

Additionally, she gained a massive success after she uploaded her popular travel blogs on Gypsy One. Likewise, she also collaborated with big companies such as Adidas. On the online versions, she was also featured on FHM, Hype Beast, and Playboy.

Moving forward to her career, she now owns her own collection with the clothing brand Lurelly and Goose Berry Intimates. She occasionally models for the products on her Instagram account as well. Other than her brand, she has done a couple of collaborations with brands like Adidas.

Besides modeling, her hobbies include exploring different new places and perform various adventurous activities. She even mentions Tokyo, Japan, The Dead Sea, and New York to be her favorite locations.

Looking at her physical appearance, she seems to hold a pretty well hourglass shape which measures at 34-27-36 inches. As a model, she stands tall with a height of 5 ft 7 inches and weighs about 47 kilograms. Moreover, her physical asset is a combination of her marvelous looks paired with her blonde hair and beautiful black eyes.

Who is Jenah Yamamoto dating?

Referring to the dating life of Jenah Yamamoto, she is currently in a relationship but has chosen to keep her boyfriend from the spotlight. Likewise, she has not posted any photos of them together or those of her boyfriend.

However,  she has occasionally posted hand photos of the two of them. We might soon hear from her about the lucky guy she has been dating so far. Furthermore, there is no record of her past relationships and hasn’t been linked with any sorts of rumors and controversies either.

What is Jenah Yamamoto’s net worth?

Looking at the salary, income, and net worth o Jenah, she sure has earned quite a considerable amount of fortune throughout her career as a model. As of the year 2020, Jenah Yamamoto estimated net worth is $700 thousand with her primary source of income being modeling. However, there is no record on her official earnings but an average paycheck of a photographer is $61,566 per year that’s approximately $31.57 per hour. Therefore, we can estimate that the model might earn about $100 per hour or maybe up to $1,500 per day.

Talking about her social media presence, she is active on several media platforms like Instagram, Twitter, and Facebook. She is a verified user on Instagram under the username @gypsyone and has amassed more than 861K followers to date. Likewise, her Twitter profile has garnered up to 50.9K followers, and her Facebook profile has about 47.6K followers at the time of writing this article.

Our contents are created by fans, if you have any problems of Jenah Yamamoto Net Worth, Salary, Relationship Status, Married Date, Age, Height, Ethnicity, Nationality, Weight, mail us at [email protected]