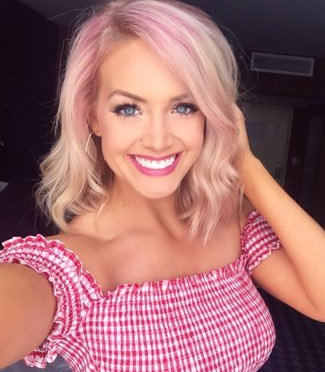 One of the contestants from the popular dating show ‘The Bachelor Season 22’ is Jenna Cooper. She is an American Social Media Manager and entrepreneur. She also competed in ‘Bachelor in Paradise Season 5’ and won the season.

Jenna Cooper is born on 9 June 1989 at Upland, Indiana, United States. Her nationality is American. Her horoscope is Gemini.  She is very and passionate person. She is unwaveringly loyal as well. Her favorite television show is ‘Friends’. Talking about the movie, her favorite movies are Taken’, ‘Sixteen Candles’ and ‘Princess Bride’.

She said in an interview that on a mechanical bull, she once broke her wrist.

Cooper’s height is 1.65 m. Other information about her body measurements is not given. But overall, she has the balanced and healthy body.

Cooper is engaged to Jordan Kimball. She met him in the 5th season of ‘Bachelor in Paradise’. They got engaged on the end of the show. They had planned the wedding date to 9 June 2019 in summer.

But it has been rumored that she is cheating Jordan after filming ended. On Tuesday, she claims ‘I am aware of the allegations being made against me and they are simply untrue. I am choosing to focus on my relationship right now’. ‘Thank you for respecting my privacy at this time.’, she said to people.

The rumor got spread as Reality Steve published screenshots earlier in the day, which showed she had been texting unidentified man about the nature of her relationship with Jordan. She wrote in the text that she and Jordan are not the real couple.

The reality star’s net worth and earnings are under review.

Our contents are created by fans, if you have any problems of Jenna Cooper Net Worth, Salary, Relationship Status, Married Date, Age, Height, Ethnicity, Nationality, Weight, mail us at [email protected]