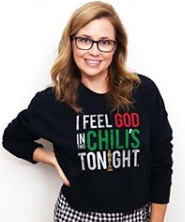 Jenna Fischer is an American actress, who has appeared in several movies and television shows. She is best known for her portrayal of Pam Beesly in the sitcom, The Office. She was only six years old when she gave her first performance. During her college days, she acted in theatre.

In the initial days of her career, She appeared in small roles in movies and television shows. After a few years of struggle, she landed a part in the sitcom, The Office, which was a major career breakthrough. The show aired for nine seasons and helped her establish her name. With her mockumentary LolliLove, she tried her hand in film direction too. In her career, she has appeared in movies and shows most of the comic genre. She has authored a book and remains active in her profession. Let’s know more about her through this article.

What is Jenna Fischer?

An American actress and director.

Her portrayal of Pam Beesly on the NBC sitcom The Office.

Where is Jenna Fischer born?

Recalling her early life, Jenna was born in Fort Wayne in the state of Indiana. She has German, Swiss-German, Scots-Irish (Northern Irish), Scottish, English, and Bohemian (Czech), ancestry. She was born to parents; Anne Miller and James E. “Jim” Fischer. Her mother is a history teacher in an elementary school and her father is an engineer.

Where did Jenna Fischer go for education?

Discussing her education, Jenna attended Pierremont Elementary School in Manchester, Missouri. For her further studies, she joined Nerinx Hall High School, a private all-girls Catholic school. Afterward, she enrolled at Truman State University. Later she graduated from there with a Bachelor of Arts in theater, as well as a minor in journalism.

When did Jenna Fischer begin her acting career?

Jenna worked as a receptionist for a number of companies after graduation. She also worked as a telephonic psychic for a short time.

She began performing Commedia dell’Arte with the Zoo District Theatre in 1998. She had her first paying appearance in a sex education video aimed at psychiatric patients. The Ronald Regan UCLA Medical Center released it. She struggled for three years after this initial tenure before landing roles in television shows and films.

She starred as a college girl in the film The Specials in 2000. It was a comedy film about super-heroes’ everyday lives. During the filming of this film, she met her first husband, James Gunn. He worked on The Specials as a scriptwriter.

She starred as Whisper in the dark comedy Employee of the Month in 2004. She also appeared on television shows such as Six Feet Under, Miss Match, Strong Medicine, and What I Like About You as a guest artist.

In the same year, she directed and starred in LolliLove, a mockumentary. In the film, she and her husband, James Gunn, played the lead roles. It was the story of a couple who wanted to bring joy to the lives of the homeless by offering them lollipops with motivational messages on the wrappers. This was her only attempt at directing.

LolliLove screened at both the St. Louis Film Festival and the TromaDance Film Festival. She received the Screen Actors Guild Emerging Actor Award for her role in the film.

She took part in The Artist’s Way, a creativity seminar based on Julia Cameron’s book of the same name. The seminar’s aim was to help artists improve their self-confidence by teaching them different self-help techniques.

She was inspired to take up the camera and direct the mockumentary LolliLove after attending the seminar. Despite the fact that her directorial debut was a success, she never directed another film after that. She, on the other hand, resumed her acting career.

She made her television debut in the comedy sitcom The Office, which premiered on the NBC network in 2005. For her, it was a game-changer. In the series, she played Pam Beesly. Her character worked as a receptionist and was reserved yet assertive.

She was able to relate to the character because she had previously served as a receptionist, and she delivered a flawless performance. She rose to fame as a result of the show, which aired from 2005 to 2013.

She made her acting debut in the horror film Slither in 2006, and she also appeared on the Bravo network’s Celebrity Poker Showdown.

She starred as Katie in the comedy film Blades of Glory, directed by Josh Gordon, in 2007. In the same year, she starred in the film Walk Hard: The Dewey Cox Story as Darlene Madison Cox. It was a comedy that was based on biopics. June Carter, a well-known American actor and comedian, inspired her character.

In 2007, she also appeared in the music video Through Any Window, directed by Willy Wisely. She became the official spokesperson for Proactiv Skincare Solutions in 2009.

In the 2011 film Hall Pass, she played Maggie, the wife of one of the main characters. Farrelly Brothers directed the film, which was a comedy.

She starred in her husband Lee Kirk’s directorial debut, “The Giant Mechanical Man,” in 2012. Janice, a single woman in her thirties who struggles to confess her love to her best friend, was her character in the film.

She starred as Rhonda McNeil in the comedy-drama miniseries You, Me, and the Apocalypse, which aired in 2015.
She is currently starring in the ABC network sitcom Splitting Up Together.

Jenna Fischer is a married woman.

Jenna is still married, according to her personal life. Lee Kirk, an actor and producer, is her husband. On June 30th, 2009, the couple got engaged. They married on July 3rd, 2010, after being together for a year. They have two children together, Weston and Harper Marie, as of now.

Previously, on October 7th, 2000, she married James Gunn. Even though they had been married for a long time, they declared their separation in September 2007 and were divorced in June 2008.

Jenna Fischer’s net worth is unknown.

Jenna receives a fair amount of money and fame as an actress and director in the film industry. Her current net worth is estimated to be $16 million, according to some online sources. Her pay, however, has yet to be revealed.

Jenna is 5 feet 6 inches tall and weighs about 57 kilograms, according to her body measurements. Her eyes are also green, and her hair is a light brown color. She wore a bra size of 34B and a dress size of 6 (US). She also has a slender body, measuring 35-26-35 inches in length, width, and height.

Our contents are created by fans, if you have any problems of Jenna Fischer Net Worth, Salary, Relationship Status, Married Date, Age, Height, Ethnicity, Nationality, Weight, mail us at [email protected]