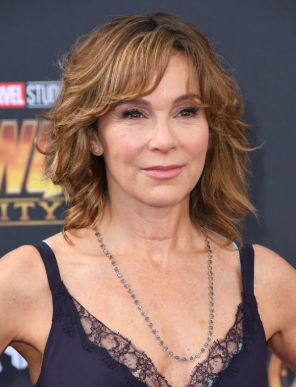 Jennifer Grey is an American actress who is known for her notable roles in the 1980s films Ferris Bueller’s Day Off and Dirty Dancing. She was also the winner of Dancing with the Stars (season 11) in 2010. She has more than 150k followers on Twitter, more than 200k followers on Instagram, and more than 100k followers on Facebook. Let’s know more about her through this article.

What is Jennifer Grey famous for?

Where does Jennifer Grey live?

Recalling her early life, Jennifer was born in Manhattan, New York, the U.S. to her parents, Joel Grey and Jo Wilder in the year 1960. Her father was an Academy Award-winning screen actor and her mother was a former actress and singer. Also, her grandfather, Mickey Katz was a comedian and musician. Similarly, she is of American nationality and belongs to Jewish ethnicity.

For education, she attended Dalton School where she studied dancing and acting. Then, she enrolled at Manhattan’s Neighborhood Playhouse School of the Theatre for two years of training as an actress after graduating in 1978.

When did Jennifer Grey begin her acting career?

What are the achievements of Jennifer Grey?

Who is Jennifer Grey married to?

Reflecting on her personal life, Jennifer was married to Clark Gregg on 21st July 2001. Together, The couple shares a daughter named Stella, born on 03rd December 2001. Presently, she lives blissfully with her family in Venice, California.

What are the health issues of Jennifer Grey?

Jennifer Grey was in a car accident with then-boyfriend, Matthew Broderick in 1987. She was seriously injured while her Broderick was hospitalized. Sadly, the wheelchair-bound widow, Margaret Doherty, and her daughter, Anna Gallagher have died in this accident.

After the accident, She has several operations and screwed a titanium plate into her spine and later she chose to do surgery and change her face. She lived with the pain for 20 years and later she knows she has cancer. The X-rays found a cancerous growth in her thyroid. After that, she was hospitalized with a ruptured disc, but she battled on and won it.

How much is Jennifer Grey’s worth?

Being an actress, Jennifer earns a decent amount of money and fame through her profession in the field of the entertainment industry. Based on some online sites, her estimated net worth said to be $10 million at present. Also, she adds up her fortune from her directing and producing films.

How tall is Jennifer Grey?

Observing her body physics, Jennifer stands a height of 5 feet 3 inches and weighs around 59 Kg. Similarly, she has a pair of hazel eyes and light brown hair colour. She used a 32B bra size, 7 (US) shoe size, and 4 (US) dress size. Further, her body measures around 34-24-32 inches.

Our contents are created by fans, if you have any problems of Jennifer Grey Net Worth, Salary, Relationship Status, Married Date, Age, Height, Ethnicity, Nationality, Weight, mail us at [email protected]