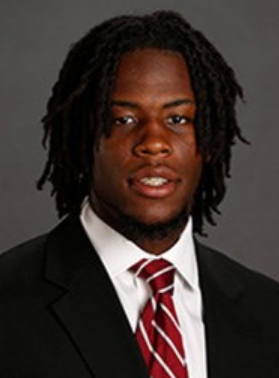 Jerry Davarus Jeudy famed as Jerry Jeudy is an American football wide receiver. He is currently playing for the Denver Broncos of the National Football League (NFL). His shirt number/jersey number is 4. Previously, he played for the Alabama Crimson Tide. He is 2 times First-Team All-SEC (2018, 2019) and two times Biletnikoff Award (2018 and 2019). As a sophomore in 2018, he was named as the nation’s best wide receiver. He is also a five-star freshman in 2017. He was drafted by the Broncos in the first round of the 2020 NFL Draft. Overall, he is a very talented footballer.

On Thursday, Alabama wide receivers Henry Ruggs III and Jerry Jeudy entered the NFL as 12th and 15th players picked, respectively, in the draft, with Ruggs going to the Las Vegas Raiders and Jeudy to the Denver Broncos. Jeudy and Ridley played together for one season at Alabama. In 2017 on a team that also included current NFL wide receivers Robert Foster and Cam Sims, Ridley caught 63 passes for 967 yards and five touchdowns in his final season at Alabama and Jeudy caught 14 passes for 264 yards and two touchdowns in his first season with the Crimson Tide. “Calvin did everything the right way,” Jeudy said. “He worked hard, practiced hard, did the right thing off the field, and me just being behind him, I really watched and learned his every move, his every step just to be a pro and be somebody you can depend on and accountable for. He was one of the leaders everybody looked up to in the locker room, so watching him do everything he did help me be a better person and better football player as well.” Denver had never drafted a wide receiver as quickly as it did Jeudy. The earliest the Broncos had chosen a wide receiver was at No. 19, where they obtained Hawaii’s Ashley Lelie in 2002. Lelie twice led the NFL in yards per reception during his four seasons with the Broncos.

What is the birthplace of Jerry Jeudy?

Jerry Jeudy was born with the real name/birth name of Jerry Davarus Jeudy on 24th April 1999 to his parents; Marie Jeudy (mother) and his father. He grew up in Pompano Beach, FL. His birthplace is in Deerfield Beach, Florida, the USA. He holds American Nationality and belongs to Afro-American ethnicity. His zodiac sign is Taurus and he is Christian by religion. He celebrated his 21st birthday as of 2020. Regarding his siblings, he has an old sister (Aaliyah Jeudy) who died when she was only seven years old. She died when he was a senior in high school in the year 2016. His parents belong to Haitian roots ancestry. His parents divorced when Jeudy was young, and he became his mom’s, little right-hand man. He used to have to sneak out of his house to go play football because his mother did not want him playing outside. As per his education, he attended Deerfield Beach High School in Deerfield Beach, Florida, and started playing football. As a senior in 2016, Jeudy was rated as a five-star recruit, the third highest-rated wide receiver in the country and 21st highest-rated recruit overall by the 247 Sports Composite. He then committed to the University of Alabama to play college football on July 28, 2016. His fathers’ name is unknown and it has not been disclosed yet.

Awards and Achievements of Jerry Jeudy

Who is Jerry Jeudy Dating?

Jerry Jeudy is an unmarried person and as of now, he is single. Currently, he is focusing on his career rather than spending his valuable time in a relationship or making a girlfriend. However, he hasn’t revealed anything about his personal life that much to the media. His sexual orientation is straight. Moreover, there is also no rumors about her dating history with anyone until now. He is enjoying his present life happily without any disturbances.

What is the Net Worth of Jerry Jeudy?

Jerry Jeudy is a very talented footballer and with his football career, he has accumulated a huge amount of money. As of 2020, the net worth of Jerry Jeudy is unknown yet as it is still being calculated. Whereas his salary has not been disclosed yet. His major source of income is from his football career. He has gone so ahead of many top players and he is currently put to compete in the 2020 NHL draft. He will be earning a lot in the future. At present, he is satisfied with his earnings. There is no exact information regarding his cars and house.

How tall is Jerry Jeudy?

Jerry Jeudy is a handsome hunk with an athletic body build. He has got a perfect height matching with his body weight. He has got a tall height of 6 feet 1 inch and his balanced weight consist of 87 kg. His hair color and eye color both are black. Being the age of 21, he looks much older than his actual age due to his body formation as he has a very muscular and well-built body. His chest size is 38 in, biceps size is 18 in and waist size is 34 in. His shoe size is 11 US. He has got a very charming personality.

Our contents are created by fans, if you have any problems of Jerry Jeudy Net Worth, Salary, Relationship Status, Married Date, Age, Height, Ethnicity, Nationality, Weight, mail us at [email protected]