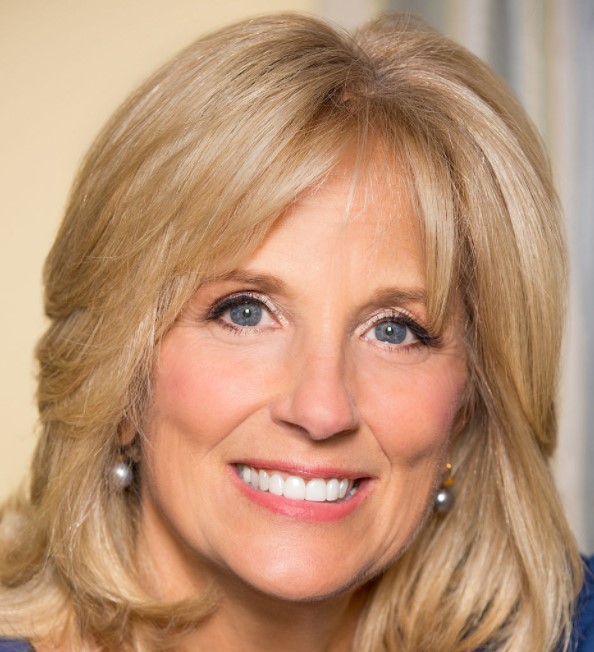 Jill Biden is an American educator best known as the wife of Joe Biden, the 46th president to be declared on January 20, 2021, following which Jill will be holding the position of “First Lady of US” succeeding Melaine Trump. Jill already had served the position of the second lady of the United States back in 2009 for over 8 years till 2017 while her husband Joe was serving as the vice-president of the US, becoming the first second lady to hold a paying job.

Not only she is known for her governmental positions but also her intelligence and personality as she even is a well-educated professor who worked as an English and writing instructor at Delaware Technical & Community College for 15 years from 1993 till 2008.

She is quite active on social media sites with over 2 million followers on Twitter: @DrBiden.

What is Jill Biden’s claim to fame?

Jill Biden was born in the United States on June 3, 1951, in Hammonton, New Jersey. Jill Tracy Jacobs is her given name. Her country of birth is the United States of America. Biden is of Italian American ancestry, and her zodiac sign is Gemini.

Jill Biden was born to Donald Carl Jacobs (1927–1999) and Bonny Jean Jacobs (1930–2008), the eldest daughter of her parents. Her father, Donald, was a bank teller and a U.S. Navy signalman during WWII before becoming the president of a savings and loan institution in Philadelphia’s Chestnut Hill neighborhood, while her mother, Bonny, was a stay-at-home mom.

She spent her childhood in Hatboro, Pennsylvania, before moving to Willow Grove with her four younger sisters, Jan, Bonny, Kelly, and Kim. Before her Sicilian grandfather changed his surname to Giacoppo or Giacoppa, he was known as Giacoppo or Giacoppa.

Jill developed a lifelong interest in rooting for Philadelphia sports teams as well as a partial Philadelphia accent while growing up in the Philadelphia area. She had always wanted to work for herself and started working as a waitress in Ocean City, New Jersey, when she was 15 years old.

Biden went to Upper Moreland High School, where she excelled academically and enjoyed English classes. Jill studied at Brandywine Junior College in Pennsylvania for one semester after graduating in 1969 to study fashion merchandising. Jill went on to the University of Delaware and received a Bachelor of Arts in English in 1975.

Biden obtained her second graduate degree from Villanova University in 1987, a Master of Arts in English. She went on to earn a Doctor of Education (Ed.D.) in educational leadership from the University of Delaware in January 2007, at the age of 55.

Jill Biden started her teaching career as a substitute teacher in the Wilmington school system.

She then worked full-time as a high school English teacher at St. Mark’s High School in Wilmington for a year.

She served in Biden’s Senate office for five months during that period.

Jill continued to teach and work on a master’s degree at West Chester State College, taking one course each semester, even after she married.

She has worked as a reading specialist and a teacher for students with mental disabilities.

In the 1980s, she worked for five years in the adolescent program at the Rockford Center psychiatric hospital.

She worked at Claymont High School for three years as a teacher. Jill spent 13 years of her life teaching in a public high school environment.

From 1993 to 2008, Biden was an instructor and teacher of English composition and remedial writing at Delaware Technical & Community College’s Stanton/Wilmington campus.

Biden is also the president of the 1993-founded “Biden Breast Health Initiative.”

In 2007, she was instrumental in the creation of “Book Buddies,” a non-profit organization dedicated to providing books to low-income children.

Jill became the second lady of the United States the year after the election, and the first second lady to have a paid job.

“Don’t Forget, God, Bless Our Troops,” a children’s book, was released in June 2012. Her stepson Beau’s deployment is the inspiration for the novel.

Biden was re-elected as the second lady on November 6, 2012, after Obama and her husband were re-elected.

On October 21, 2015, she was by her husband’s side in the Rose Garden when he declared his decision not to run for president in 2016.

Her memoir, “Where the Light Enters: Building a Family, Discovering Myself,” was released in May 2019.
Jill played an important role in Joe’s decision to run for President of the United States in 2020.

On January 20, 2021, Biden will take over as First Lady of the United States.

Jill Biden has been on two occasions. Bill Stevenson, a former college football player, was her first husband. When the couple married in 1970, Jill was just beginning her career and became known as Jill Stevenson. He opened the Stone Balloon in Newark, Delaware, near the University of Delaware, within a few years.

The couple separated and divorced in 1974 after nearly four years of marriage.

Jill met Joe Biden on a blind date a year later, in 1975, when he was a senator. Joe’s brother Frank set up the date because he met her in college and Joe had never seen her life except for a photograph in a local commercial. Despite the fact that Joe was nine years her age, she was fascinated by his more formal presence and attitude, telling her mother, “I finally met a gentleman.”

A Catholic priest married the couple on June 17, 1977, at the Chapel at the United Nations in New York City, after they had been dating for two years. Joe’s first wife, Neilla Hunter, and their newborn daughter had died in a car accident four and a half years ago.

Joe proposed to Jill several times before she decided to marry him, unsure of committing to raising his two young sons, Beau and Hunter, who had survived the crash. In 1981, they welcomed their only daughter, Ashley, and Jill took a two-year break from work to raise the three children.

Ashley is currently employed by the Delaware Department of Programs for Children, Youth, and Their Families as a social worker and staffer.

Following her husband Joe’s victory in the 2020 presidential election, Jill will soon be the First Lady of the United States. Jill’s net worth is expected to be $15 million by 2020, based on all of her earnings. Her annual salary as an instructor was about $100,000.

Back in June 2017, the couple bought a $2.7 million worth off-the-water vacation home in Rehoboth Beach, Delaware, near Cape Henlopen State Park. They even leased a $4 million mansion in McLean, Virginia, paying $20,000 a month.  By 2019, the couple reported some $15 million in income since leaving the vice presidency, including $700,000 in speaking engagements for herself.

Jill Biden is a beautiful woman in her late-60s. She has a well maintained slim and healthy body physique which she maintained with her perfect balanced diet. She stands tall with a height of 5ft 6inches and weighs around 55kg. She has a fair complexion with blonde hair and a pair of blue eyes.

Our contents are created by fans, if you have any problems of Jill Biden Net Worth, Salary, Relationship Status, Married Date, Age, Height, Ethnicity, Nationality, Weight, mail us at [email protected]