James Thomas Fallon is an American comedian, actor, television host, singer, writer, and producer. He is known for his work in television as a cast member on Saturday Night Live and as the host of late-night talk show The Tonight Show Starring Jimmy Fallon and before that Late Night with Jimmy Fallon. 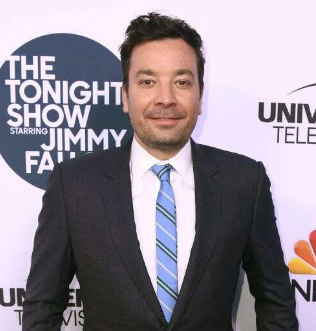 Everyone looks so much better when they smile.

Leno, Conan. They are both really funny. They really know how to land one.

Sometimes I wish I had a terrible childhood, so that at least I'd have an excuse.

Jimmy Fallon is one of the funniest men in America. Over two and a half million people tune in every week to catch his popular NBC show, The Tonight Show Starring Jimmy Fallon. People all around the world love to listen to his jokes. His wit and his comic genius tip the scale in his favor. Let’s know more about his through this article.

What is Jimmy Fallon known for?

Jimmy Fallon is one of the American comedian and talk show host known for his exuberant presence on the sketch comedy show Saturday Night Live (SNL; 1998–2004) and as host of Late Night with Jimmy Fallon (2009–14) and The Tonight Show from 2014 to present.

Who are Jimmy Fallon’s parents?

Recalling his early life, Fallon was born as James Thomas Fallon, Jr in Brooklyn, New York City, US. His father’s name is James Fallon, Sr. Likewise his mother’s name is Gloria Fallon. He has an elder sister, Gloria. He is American by nationality and belongs to mixed ethnicity. His birth sign is Virgo.

When did Jimmy Fallon become a part of the entertainment industry?

What are the achievements of Jimmy Fallon?

Unlike other late-night hosts, Jimmy brought new style on the live show focusing on music, dancing, games, and impersonations. His musical parody and celebrity games have gone viral many times, gaining accolades and fans.

With no surprise, Jimmy has been nominated in many prominent awards such as Grammy Award in 2003 for the Best Comedy Album, Critics’ Choice Television Awards in 2012 for Best Talk Show and so on.

Other than that, Jimmy also had the honor to host the 62nd Primetime Emmy Awards in 2010 and won a Grammy in 2013 for Best Comedy Album. Similarly, Jimmy has published two comedy albums and five books so far.

Who is Jimmy Fallon’s wife?

Reflecting on her personal life, Fallon is happily married to film producer Nancy Juvonen. Nancy is also the co-owner of Flower Films. The couple first met on the set of Fever Pitch and began dating in May 2007. After dating for two months only, the couple got engaged and soon tied the knots in December 2007.

As for now, the couple is living a blissful life with two daughters, Winnie Rose Fallon and Frances Cole Fallon. Also, they own a Golden Retriever named Gary Frick.

What is Jimmy Fallon’s net worth?

As an American comedian, Fallon earns a decent amount of money and popularity in the field of the entertainment industry. As per online sites, his estimated net worth said to be $60 million as of 2019. While his annual salary is somewhere around $16 million. Further, his multiple profession adds up his fortune as well as a singer, producer, actor, writer, and TV host.

How tall is Jimmy Fallon?

Observing his body statistics, Fallon has an average built body standing with a height of 6 feet. He weighs 86 kg. He has dark brown colored hair and dark brown colored eyes. Further, hi body measures 40-34-40 inches. He used 10 (US) shoe sizes.

Our contents are created by fans, if you have any problems of Jimmy Fallon Net Worth, Salary, Relationship Status, Married Date, Age, Height, Ethnicity, Nationality, Weight, mail us at [email protected]