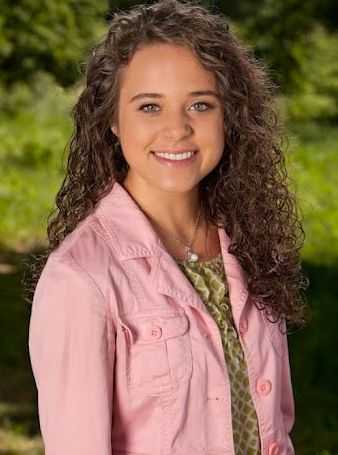 Jinger Nicole Duggar, popularly known as Jinger Duggar is an American author and television personality. She is best known for appearing on the TLC reality series 19 Kids and Counting and its spin-off series, Counting On. She is one of the 19 children of the Duggar family.

What is Jinger Duggar Vuolo Famous For?

– Appearing on TLC reality series 19 Kids and Counting and its spin-off series, Counting On.

Where was Jinger Duggar Vuolo Born?

Jinger Vuolo was born on 21 December 1993. Her birth name is Jinger Nicole Duggar. Her birthplace is in Fayetteville, Arkansas in the United States. She holds an American nationality. She was born to a father, Jim Bob Duggar, and a mother, Michelle Ruark. Her zodiac sign is Sagittarius. She has 18 siblings. She is the fourth child of 19 children. Her brothers are Joshua “Josh” James, John-David, Joseph Garrett, Josiah Matthew, Jedidiah Robert, Jeremiah Robert, Jason Michael, James Andrew, Justin Samuel, and Jackson Levi. Her sisters are Jana Marie, Jill Michelle, Jessa Lauren, Joy-Anna “Joy”, Johannah Faith, Jennifer Danielle, Jordyn-Grace Makiya, and Josie Brooklyn.

She first began her television career in 2004 appearing on the documentary 14 Children and Pregnant Again. It features the Duggar family.

She appeared in a subsequent documentary Raising 16 Children in 2006.

She became a regular cast on 19 Kids and Counting.

The show was canceled in 2015 in the light of the Josh Duggar molestation controversy. Josh is the eldest of 19 siblings.

TLC created its 3-part spin-off series, Counting On in 2015.

The spin-off series was picked up for a full season in March 2016.

The ninth season of Counting On premiered in February 2019.

She published a book, Growing Up Duggar, with her sisters in 2015.

Who is Jinger Duggar Vuolo Married to?

Jinger Duggar is a married woman. She is married to former footballer and current pastor Jeremy Vuolo. They first met on a mission trip to Central America in 2015. They started dating in December 2015. They got engaged in July 2016 and later tied a knot to each other in November 2016. The couple has a daughter, Felicity Nicole Vuolo, born in July 2018.

The family moved to Los Angeles, California, where Jeremy is pursuing his graduate studies at the Master’s Seminary.

What is Jinger Duggar Vuolo Net Worth?

Jinger Vuolo mostly earns from her reality television career. She has appeared in several reality television series. She also earned from the sales of her book. Her salary is not available at present. Her net worth is estimated at $2 million.

Our contents are created by fans, if you have any problems of Jinger Duggar Net Worth, Salary, Relationship Status, Married Date, Age, Height, Ethnicity, Nationality, Weight, mail us at [email protected]