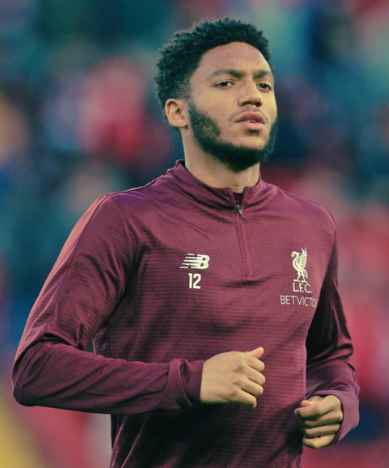 Joe Gomez is an international England professional footballer. He has played in the different club Charlton Athletic and Liverpool and England football team. Generally, his playing position is Defender. He is a Liverpool Premier League team footballer. Presently, he has played in the England national team since 2017. Let’s know more about him and his soccer career through this article.

What is Joe Gomez famous for?

An English professional footballer who plays as a center back for Premier League club Liverpool and the English national team.

Where is Joe Gomez born?

Recalling his early life, Joe was born in Catford, London to a Gambian father and an English mother as Joseph Dave Gomez in the year 1997. His current age is 22 years old. He is British by nationality and belongs to mixed ethnicity. Similarly, his birth sign is Gemini and he is Christian by religion. The information about his parents, siblings, and his academic qualification is yet to be disclosed.

When did Joe Gomez pursue his soccer career?

Joe began his professional career when he was ten years old, when he joined Charlton Athletic. At the age of 13, he was already making his first appearance for the club’s Under-18 team.

He has represented England at the under-17, under-16, and under-19 levels. In May 2014, he was a member of the England Under-17 squad that won the UEFA European U-17 Championship.

He signed his first professional contract with Charlton Athletic in October 2014. On the 20th of June 2015, he signed a five-year contract with Premier League Liverpool for a fee of 3.5 million EUR.

On October 13, 2015, he sustained a season-ending anterior cruciate ligament injury while playing for England U-21.

On August 23, 2017, he made his European debut against Hoffenheim in Champions League action.

In November 2017, he was called up to the England national team for the first time. Furthermore, he has been compared to Rio Ferdinand as a complete footballer who is composed and plays center-back.

In May 2018, he underwent surgery for an ankle injury, and Liverpool announced on their official website that he will miss the remainder of the season, including the 2018 UEFA Champions League final. In total, he appeared 31 times for Liverpool this season.

In February 2019, he had surgery to help him recover from his injury. After regaining fitness in April, he appeared as a substitute in Liverpool’s win in the 2019 UEFA Champions League Final.

Joe Gomez, is he married or not?

In terms of his personal life, Joe was not married, but he was engaged to Tamara, his long-term girlfriend turned fiancee. They share a home in Formby, which is on the outskirts of Liverpool. They have a son named Kyrie, who was born in the year 2018. Currently, the couple is enjoying a happy life free of speculation of breakup.

What is Joe Gomez’s net worth?

Joe makes a good living as a soccer player and has a good reputation in the sports industry. According to some online outlets, he already earns £1,456,00 a year, with a weekly income of £28,000. His estimated net worth, however, has yet to be revealed.

Joe is 6 feet 2 inches tall and weighs about 77 kilograms, according to his body measurements. Her eyes are black, and her hair is a dark brown color. He also wore 11.5 (UK) shoe sizes, and his biceps are 16.5. His body measurements are 43-33-35 inches.

Our contents are created by fans, if you have any problems of Joe Gomez Net Worth, Salary, Relationship Status, Married Date, Age, Height, Ethnicity, Nationality, Weight, mail us at [email protected]