Joe Sugg is a popular British YouTuber, vlogger, author, and a television personality. 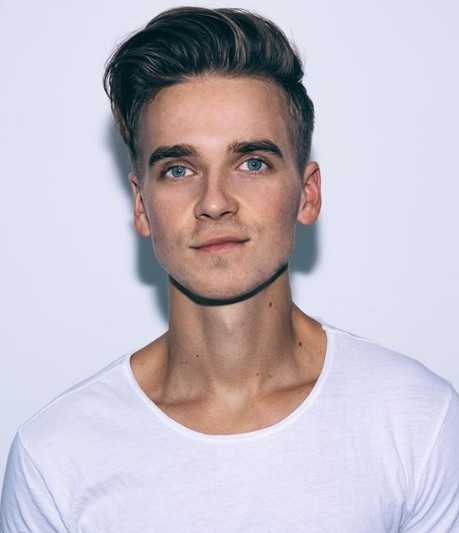 Joe Sugg is a popular British YouTuber, vlogger, author, and a television personality. His real name is Joseph Graham Sugg. He rose to prominence as a YouTuber. He has Youtube channels, ThatcherJoe, ThatcherJoeVlogs, and ThatcherJoeGames. His popularity reached the peak when he competed in the sixteenth series of Strictly Come Dancing, where he finished in the runner-up position. He partnered with Australian professional dancer, Dianne Buswell, whom he is currently dating.

He was named Best British Vlogger by Radio 1 Teen Choice Awards in 2015.

Strictly’s runner-ups, Joe Sugg and Dianne Buswell are in head over heels with each other. Dianne went back to her home country, Australia to celebrate Christmas with her family, whereas Joe remained home in the UK. Though they are thousands of miles apart, they have expressed their love for each other via social media.

Dianne posted on her Instagram, a picture of herself enjoying the festive in the Australian beach. She is seen posing next to a huge blown up flamingo.

She wrote, “Don’t worry about me @Joe_sugg I have a big old floating friend with me safe and sound.”

She made sure that she is safe there and don’t want her boyfriend to worry at all.

Joe Sugg commented on her post, “The only thing that worried me in this photo is that big ol’ HAT!”

It seems the two are completely in love with each other. They are happy to found each other. Cheers to Strictly Come Dancing, where they met each other.

Joe Sugg was born on 8 September 1991. He was born to Graham Sugg and Tracey Sugg. His birthplace is in Wiltshire, England, in the United Kingdom. He holds British nationality. He has a sister named Zoe Sugg. Her zodiac sign is Virgo.

Sugg was a member of the YouTube Boyband that raised money for Comic Relief. He was also featured in The Guardian.

In 2014, he was also featured in the single “Do They Know It’s Christmas?” as part of the Band-Aid 30 charity supergroup, raising money for the Ebola virus epidemic in West Africa.

In 2015, he made a cameo voiceover as seagull along with flatmate Caspar Lee, comic Alan Carr and singer Stacey Solomon in the UK version of the film, The SpongeBob Movie: Sponge Out of Water. He was uncredited.

The same year, he made an appearance alongside Casper Lee in the direct-to-DVD film, Joe and Caspar Hit the Road.

He is also the author of the graphic novel Username: Evie. Hodder & Stoughton published it in 2015.

The sequel to it, Username: Regenerated was published in 2016.

In 2017, he starred alongside fellow YouTubers Alfie Deyes and Marcus Butler in an episode of the British television show, Release the Hounds.

His final graphic novel, Username: Uprising was released in September 2017.

He appeared as a contestant in the sixteenth series of Strictly Come Dancing in 2018. He partnered with Australian professional dancer, Dianne Buswell. At the end of the competition, he emerged as a runner-up.

The popular YouTuber is in the relationship with Dianne Buswell. They started dating from 2018.

He lives in London, the United Kingdom at present.

His sister, Zoe Sugg is also a blogger and internet personality. She is also famous on YouTube as Zoella. Her self-titled YouTube channel, Zoe Sugg has over 4.8 million subscribers.

Net Worth of Joe Sugg

He has endorsed several brands on his YouTube channel. As of 2018, his net worth is estimated at around $6 million.

In 2016, Sugg and his sister, Zoe Sugg started a ‘Sugg Life’, which released a range of branded merchandise. They collaborated with The Creator Store. It was closed as of May 2018.

Our contents are created by fans, if you have any problems of Joe Sugg Net Worth, Salary, Relationship Status, Married Date, Age, Height, Ethnicity, Nationality, Weight, mail us at [email protected]