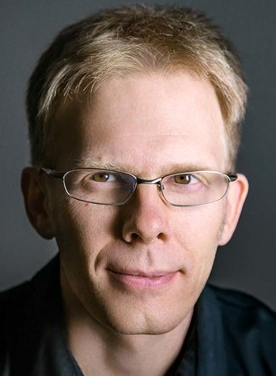 John D. Carmack II famed as John Carmack is an American computer programmer and engineers best known for his video game developing abilities. He is also noted for being the co-founder of id Software. He is credited for serving as the lead programmer of the id Software video games like Doom, Quake, Commander Keen, Wolfenstein 3D, and Rage. He has a great contribution towards the industry for his innovations in 3D graphics including the algorithm for shadow volumes. He turned as the CTO at Oculus VR in August 2013. Overall, he is a very talented person.

id Software founder John Carmack went on Joe Rogan to talk judo, the future of virtual reality, and labor in the video game industry. Doom programmer and game industry legend John Carmack recently went on Joe Rogan’s podcast, a show downloaded by millions each month and a favored space for men to launder bad ideas. The pair talked about judo training, the future of virtual reality, the magnificence of space rockets (which Carmack has designed), and labor in the video game industry. Rogan asked about the long hour’s developers work to ship a game, often under brutal time constraints, which are known in the industry as “crunch.” Carmack acknowledged that people in the industry work very long hours and that the long hours he’s put into creating Doom and other games have made him rich. But ultimately, he doesn’t believe game developers should be prevented from working long hours by law. Growing labor organization efforts in the games industry cite crunch as one of the main reasons developers need to unionize. Big games like Red Dead Redemption 2 don’t ship without workers suffering through long, often mandatory, periods of extended hours called “crunch.” Carmack didn’t see much problem with that.

John was born as John D. Carmack and he landed on the planet on August 20, 1970, which makes his age be 49 years old as of 2019. His place of birth is in Shawnee Mission, Kansas, the United States of America. He was born to the parents named Inga Carmack (mother) and Stan Carmack (father). Talking more about his family background, his father used to work as a local television news reporter. He was raised up in the Kansas City Metropolitan Area under his parents’ custody. He developed an interest in computer and its tools from an early age. Regarding his education and academic achievements, he was enrolled at Shawnee Mission East High School in Prairie Village and also attended Raytown South High School. With the 1978 shoot ’em up title Space Invaders, he was first introduced to video games when he was a child enjoying his summer vacation. He was highly impressed by the games like Pac-Man, a 1980 maze chase arcade game. He is greatly influenced by Japanese video game designer Shigeru Miyamoto. At the age of 14, he broke into a school for helping students to steal Apple II computers. During that act, the police were informed about unusual activity through a silent alarm and thus, Carmack was arrested which made him sentenced to a year in a juvenile home. Later, he was enrolled at the University of Missouri-Kansas City but dropped the program after completing two semesters in order to work as a freelance programmer. His religion is Atheist and his ethnicity is White. His nationality is American.

Carmack is a very handsome person and he has an average height and has a slim body structure. His BMI calculation might be normal but the exact facts about his body statistics are not available. We can assume that he is physically fit like the way he is fit in his mental capacity. Overall, he has got a healthy body.

John Carmack is a married person. He was married to Katherine Anna Kang. They met in 1997 for the first time and toed their knot on January 1, 2000. From their happy conjugal life, the duo jas welcomed a son born in 2004. Talking more about his personal life, the American computer programmer has supported the 2012 presidential campaign of Republican Ron Paul. As of today, the couple is living a happy life.

Net worth of John

John Carmack has an estimated net worth of 40 million USD. He has made a huge fortune by amassing income from his professional life in the technical field. He has earned both name and fame by developing video games and co-founding id Software. His salary will be added soon.

Our contents are created by fans, if you have any problems of John Carmack Net Worth, Salary, Relationship Status, Married Date, Age, Height, Ethnicity, Nationality, Weight, mail us at [email protected]