John Martin Collins III is an American professional basketball player for the Atlanta Hawks of the National Basketball Association. 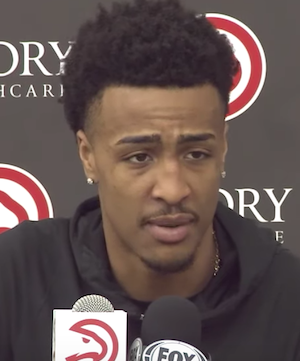 John Martin Collins III famed as John Collins is a famous professional basketball player. At present, he is playing for the Atlanta Hawks of the National Basketball Association (NBA). His playing position is Power forward. Previously, he played college basketball for the Wake Forest Demon Deacons. He led the team in field goal accuracy at 54.7% during his freshman year. Overall, he is a very talented player.

Atlanta Hawks forward John Collins has been suspended for 25 games for breaching the NBA’s anti-doping rules. He tested positive for Peptide-2, a drug that increases the release of a growth hormone. He told that he plans to appeal against the suspension, which is set to begin when the Hawks face the San Antonio Spurs on Tuesday. “I am incredibly frustrated and disappointed in myself for putting all of us in this position,” said Collins. He is the third NBA player to be given a 25-game ban for breaching drug regulations this season.

What is the birthplace of John Collins?

On 23rd September 1997, John Collins was born as John Martin Collins III. His birthplace is in Layton, Utah, the USA. As of 2018, he celebrated his 22nd birthday with his friends and families. He belongs to American nationality and his race/ethnicity is Mixed. He is Christian by faith. He was born to John Collins Jr. and Lyria Rissing-Collins. His father served in the Navy and his mother was in the Air Force. He spent his childhood in the Virgin Islands, Guam, and Turkey. Regarding his education, he went to attend Cardinal Newman High School in West Palm Beach, Florida. He signed a letter of intent to play college basketball at Wake Forest on 13th November 2014.

How tall is John Collins?

John Collins is a handsome hunk with an athletic body build. He has got a charming smile and glowing face attracting a lot of viewers towards him. He stands at the tall height of six feet nine inches with a balanced weight of 107 Kg. He has also tattooed in his body. On his left shoulder, there is a tribal tattoo. A totem is inked on his right forearm. Biceps are covered with Asian script. On his right shoulder is a Lion head with a war bonnet on it. There is an elephant head is on the inside of Collins’s right arm. Other body measurements including his chest size, biceps size and more will be updated soon as it has not been revealed. He maintains his body a lot by doing frequent exercises. Overall, he has got a decent body.

How was the career of John Collins?

How much is John Collins’s Net Worth?

At the age of twenty-two, John Collins has earned huge fame and money. This is just the starting point of the career and as of 2019, he has an estimated net worth of over about $4 million dollars. He made all these earning by himself and he deserved it all. He reportedly signed a rookie-scaled contract with Atlanta Hawks in the year 2017. He has an average salary of $2,299,080 dollars annually. So far he has made earnings of about $4 million dollars from his entire NBA career. He is sincere towards his playing career and he is satisfied with whatever he is receiving. He is living a luxurious life-style from his earnings.

Who is John Collins dating?

It is always interesting to discuss the relationship details of basketball players. Talking about the marital status of John Collins, he is not married yet and he is still to get married. He is young to get married. There are also no rumors and dating history of John in the past. So, due to this, he is assumed to be single. He has neither posted any pics of girlfriend nor revealed anything about his dating affairs. He has given all his dedication and time to play basketball rather than dating girls. He is living a happy life without any disturbances at present. His sexual orientation is straight and he is not gay.

Our contents are created by fans, if you have any problems of John Collins Net Worth, Salary, Relationship Status, Married Date, Age, Height, Ethnicity, Nationality, Weight, mail us at [email protected]