John Ratcliffe is an American politician and attorney who has served as the congressman for Texas's 4th district since 2015. 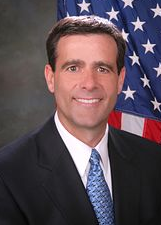 John Ratcliffe is an American politician and attorney who has served as the congressman for Texas’s 4th district since 2015.

He has been regarded as one of the most conservative members of Congress. He is a prominent Trump supporter. You can read all about his background and his career so far below.

President Donald Trump announced on July 28, 2019, that he intended to nominate Ratcliffe to replace Dan Coats as Director of National Intelligence. Dan Coats has held the position since 2017 and will officially be stepping down from his position on August 15th, 2019.

On August 2nd, Ratcliffe abruptly withdrew his name from the appointment. The withdrawal happened after Republican senators raised concerns about him, former intelligence officials said he might politicize intelligence, and media revealed Ratcliffe’s embellishments regarding his prosecutorial experience in terrorism and immigration cases.

John Ratcliffe, a conservative representative from Texas’s 4th District reportedly met with Trump to discuss the job nearly on July 2019 and gained national attention after going after Special Counsel Robert Mueller during his testimony before Congress.

Ratcliffe said during the public hearing, “I agree with Chairman Nadler this morning when he said Donald Trump is not above the law. But he damn sure should not be below the law which is where Volume II of this report puts him.”

Where is John Ratcliffe born?

Recalling his early life, John Ratcliffe was born in Mount Prospect, Illinois, northwest of Chicago. He was the youngest of six children; both of his parents were teachers.

Regarding his education, He graduated from Carbondale Community High School in Carbondale, Illinois in 1984, the University of Notre Dame in 1987 with a Bachelor of Arts in Government and International Studies. He then attended law school at SMU in Dallas (now Dedman School of Law) and earned his Juris Doctor in 1989.

What is the profession of John Ratcliffe?

Who is John Ratcliffe married to?

Reflecting on his personal life, John was a married man. He was married to Michele Ratcliffe. Fortunately, the couple shares the same year of birth (1965). They share two children, daughters Darby, and Riley Ratcliffe. Their eldest child, Riley plays soccer and is a student at Texas A&M. She is currently in a relationship with her boyfriend Jarrod Rasberry.

Darby is a student at Rockwell-Health High School and is an avid competitive diver. Based on both of Ratcliff’s daughters’ Instagram photos, they are incredibly close with one another and they both regularly visit Washington, D.C. to visit their father.

As a lawyer and government employee, John assumed the sum of a good amount of money from his career. His estimated net worth and salary for 2019 are still under review.

Moving to his body statistics, there is not a piece of single information available on the internet or social media. Once it was disclosed, we will let you know.

Our contents are created by fans, if you have any problems of John Ratcliffe Net Worth, Salary, Relationship Status, Married Date, Age, Height, Ethnicity, Nationality, Weight, mail us at [email protected]