Jon David Gruden is an American football coach and current head coach of the Las Vegas Raiders. He first served as the Raiders' head coach from 1998 to 2001 during their tenure in Oakland and rejoined the team in 2018. 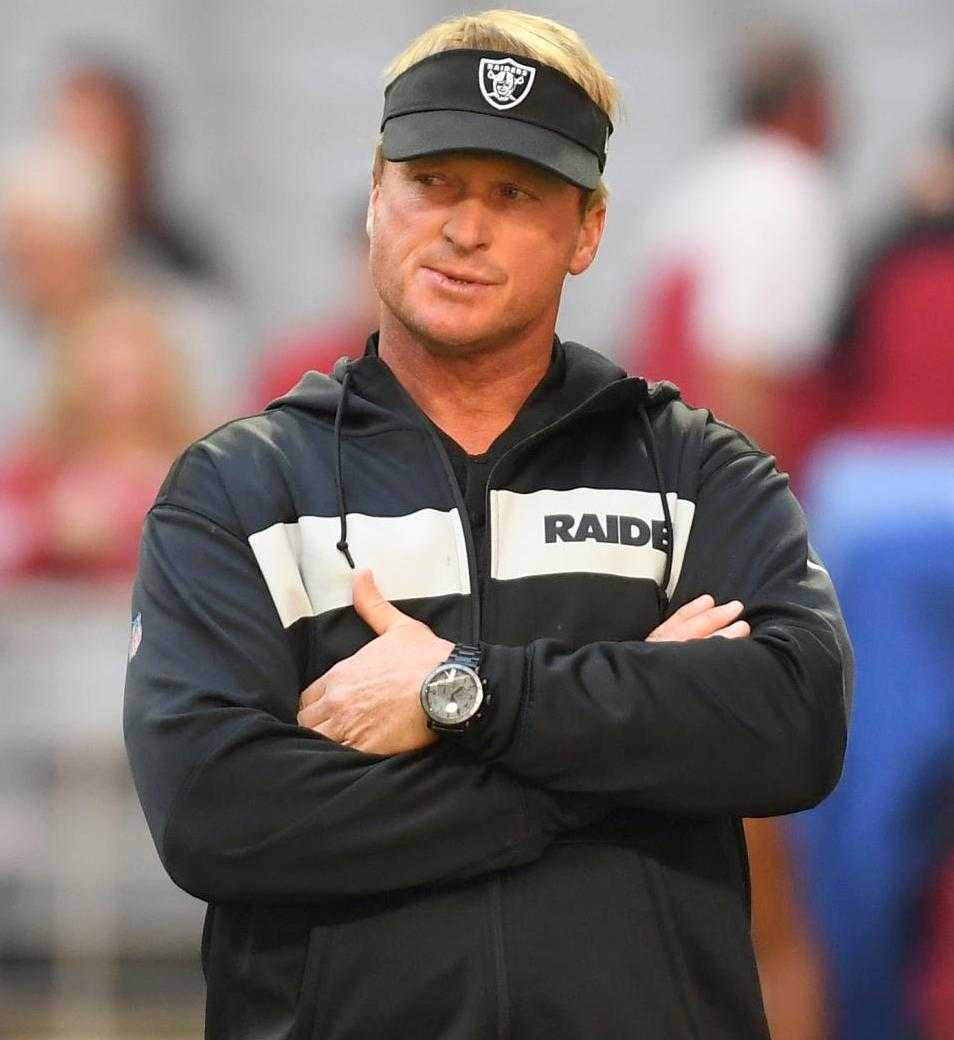 I've always coached energy, hustling, rushing to the pile, and if it is wiggling, you do hit it because guys are fighting for yardage, and sometimes, you've got to give up the ball because of one inch.

I got a lot of the greatest values in life from playing sports, from playing football - teamwork, sportsmanship, my work ethic, resiliency, dedication - I got it all by being on a team.

I don't want to be a negative piece of barbed wire sitting up in the booth with all the answers. I think that's a turn-off.

What is Jon Gruden Famous For?

– The youngest head coach to win a Super Bowl.

Where was Jon Gruden Born?

Jon Gruden was born on 17 August 1963. His birth name is Jon David Gruden. His birthplace is in Sandusky, Ohio in the United States. He holds an American nationality. He was born to a father, Jim Gruden. He has 2 brothers, Jay, and James. He was raised Roman Catholic. He belongs to the White ethnicity.

He attended Clay High School in South Bend, Indiana. After high school, he attended Muskingum College in New Concord, Ohio. He transferred to the University of Dayton where he played college football. He graduated from Dayton with a degree in communications in 1986.

He was hired as a graduate assistant coach at the University of Tennesse during the 1985-86 season.

He then served as the quarterbacks’ coach at Southeast Missouri State.

He then served as an offensive assistant as the tight ends coach at the University of the Pacific.

He became a special assistant with the San Francisco 49ers in 1990.

He became the wide receivers coach for the University of Pittsburgh in 1991.

He became the special offensive assistant/wide receivers coach for Green Bay Packers in January 1992. He was 28 at the time.

He then became the offensive coordinator of the Philadelphia Eagles.

He was then appointed as the new head coach of the Oakland Raiders for the 1998 season.

He posted a consecutive 8-8 record in his first season at the Raiders.

He finished 12-4 in the 2000 season, which was the team’s most successful season in a decade. He also led the Raiders to their first division title since 1990.

He finished his 4 seasons with the Raiders, compiling a 40-38 record (including playoffs).

He then became the head coach of the Tampa Bay Buccaneers in 2002.

He signed a five-year contract worth $17.5 million with the Buccaneers.

He led the Buccaneers to win their first Super Bowl, XXXVII. He had finished the regular season 11-5.

He earned his 100th career victory against the New Orleans Saints.

He was fired from the team in January 2009 after serving seven seasons there.

He created the Fired Football Coaches Association. He closed the FFCA upon returning to coaching in 2018.

He became the color analyst on its Monday Night Football telecasts on ESPN in May 2009.

He also served as an analyst for ESPN’s coverage of the NFL Draft and postseason college football games.

He became a volunteer assistant offensive line coach at Carrollwood Day School in Tampa, Florida in May 2010.

He extended his contract with ESPN in September 2012.

He signed another contract extension with ESPN in December 2014 that made him the highest-paid personality at ESPN.

His last game for ESPN was the 2017 AFC Wild Card game between the Tennessee Titans and the Kansas City Chiefs.

He returned to the Raiders as their head coach for the 2018 NFL season.

He signed a 10-year contract worth $100 million with the Raiders in January 2018. It was one of the biggest contracts in the history of the NFL.

He faced a 4-12 win-loss record in his first season (2018 season) upon returning to the Raiders.

Who is Jon Gruden Married to?

Jon Gruden is a married man. He is married to Cindy Gruden. He has 3 children, Deuce, Michael, and Jayson.

What are Jon Gruden Body Measurements?

What is Jon Gruden Net Worth?

Jon Gruden earns from his professional coaching career. He coaches the Oakland Raiders of the NFL. He signed a $100 million contract with the Raiders in 2018. He was previously one of the highest-paid personality on ESPN. He has an annual salary of $10 million. His net worth is estimated at $22.5 million.

Our contents are created by fans, if you have any problems of Jon Gruden Net Worth, Salary, Relationship Status, Married Date, Age, Height, Ethnicity, Nationality, Weight, mail us at [email protected]