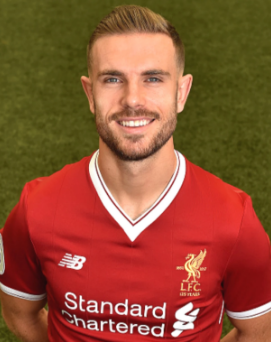 Jordan Henderson is an English professional footballer who plays as a captain for Premier League club Liverpool and the English National Team.

Jordan joined the youth system of his hometown club Sunderland aged eight. He signed a professional contract with the club in July 2008. He then made his first Sunderland start and home debut against Blackburn Rovers in the League cup.

Jordan joined Championship club Coventry City on a one-month deal in January 2009. He made his Coventry debut in a defeat to Derby County. He scored the first senior goal of his career on 28 February 2009 against Norwich City. In April 2009, after the injury, he returned back to Sunderland.

Jordan broke into Sunderland’s first team and made several premier league appearances in the 2009-2010 season. He scored a first senior goal for the club in League Cup third round. On 19 December he scored his first premier league goal against Manchester. He spent the majority of the seasons playing as a midfielder on the right side but also played centrally in the absence of Lee Cattermole. On 23 April 2010, he earned a new five-year contract from his versatility and consistency. He was listed on the official FIFA website as one of the young players to watch in January 2011. He was also named as Sunderland’s Young Player of the year for the second season running.

Jordan was transferred to Liverpool for an undisclosed fee on 9 June 2011. He made his first debut in Liverpool’s first match of the 2011-2012 Premier League. On 27 August 2011, he scored his first goal for Liverpool. On 26 February 2012, he started to play as the right midfielder in Liverpool’s 2012 League Cup Final victory over Cardiff City. He ender the 2011-2012 season with two goals from his 44 appearances in the match.

He established himself as the regular member of the Liverpool team in the 2013-2014 season. But before playing 35 Premier League matches he received his first red card which automatically resulted in him ban three matches. This made him miss three matches of the last four matches. He made his 100 appearances for club Liverpool on 29 September 2014.

Jordan started the season on good form. He as names as the club’s vice-captain. On 29 November he started as the captain for the first time for Liverpool in the Premier League. He marked his 150th appearance for the club by scoring a goal which made them win against Leicester City. He signed a five-year contract extension at Liverpool on 23 April.

In June 2015 Jordan was made the captain of the team. But after the heel injury, he could not join the starting lineup.

Jordan started again with the regular appearances on the 2016-2017 season for the starting eleven. He scored a spectacular 25-yard striking win over Chelsea at Stamford Bridge on 16 September. This made him earn the Premier League Goal of the Month award.

Jordan represented England at four different levels. In 2009 he made his debut for under-19s against the Czech Republic. He scored his first goal for England in The European U21 Champions Play-off against Romania. Jordan was selected in England U21 squad for the 2011 Europeans Champions. He captained the England U21 team in Euro 2013 qualifier. He was named as the England U21 Player of the Year in the inaugural year of the award. He then captained the under 21 teams for the 2013 UEFA European Under 21 Championship.

Jordan was omitted from England U21 squad on 11 November 2010 but was called for the senior England squad on 17 November 2010. He made his debut in the match by playing as a central midfielder. He was then called up to England Euro 2012 squad to replace Frank Lampard as he was injured. He was featured in England’s first match of the tournament.  He was also selected in the 23-man squad to travel to Brazil for the 2014 FIFA World Cup.

Jordan was named in the 23-man England National Team squad for the 2018 FIFA World cup and played for it. Till now, he played 3 games in this World Cup without any goal.

Jordan is a very nice man as he does not drink smoke or flirt with other girls. He has loved only one woman and married her only. Her name is Rebecca Burnett. This couple has a daughter named Elexa Henderson. His Zodiac sign is Gemini. His net worth is $30 Million and his salary is £100,000 a week. He has a height of 1.82 m and his balanced weight is 67 Kg.

Our contents are created by fans, if you have any problems of Jordan Henderson Net Worth, Salary, Relationship Status, Married Date, Age, Height, Ethnicity, Nationality, Weight, mail us at [email protected]