Joseph Baena is an American bodybuilder, actor and a son of a popular Hollywood actor and politician, Arnold Schwarzenegger. 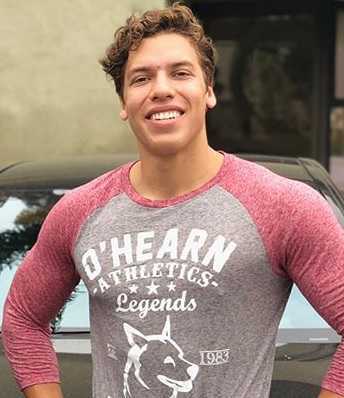 Joseph Baena is an American bodybuilder, actor and a son of a popular Hollywood actor and politician, Arnold Schwarzenegger. His father is a former bodybuilder who has won Mr. Olympia seven times and also has served as the Governor of California from 2003 to 2011. Joseph was born to Arnold and his housekeeper Mildred Patricia Baena, while Arnold was married to Maria Shriver. However, his identity was kept secret from his father, Arnold for over seven years. Joseph’s identity was revealed later after Arnold and his wife Maria separated following the 25 years of marriage.

Joseph Baena, the son of popular actor, politician, and former bodybuilder, Arnold Schwarzenegger, made the headlines as he has recreated his father’s signature bodybuilding pose. He has shown his interest in bodybuilding following the footsteps of his father, who was the titleholder of Mr. Olyimpia seven times.

He recently shared the pic on his Instagram which reflects a similar pose struck by his dad back in 1976. He captioned the photo, “Just a lil thicc”.

The 21-years old Joseph has shown interest in athletics and sports from the early age of his life. He hits the routine gym and maintains his body.

Joseph Baena is the son of Arnold Schwarzenegger.

Joseph Baena was born on 2 October 1997. His birth place is in Los Angeles, California in the United States. He holds American nationality and belongs to white ethnicity. His zodiac sign in Libra.

He attended Frontier High School and graduated from there in 2015. After high school graduation, he attended one of the prestigious universities, Pepperdine University. He was a star athlete at the Univerisity, where he was involved in college festivals and sports. He graduated in Business and Business Management from Pepperdine.

He was born to Arnold Schwarzenegger and Mildred Patricia Baena. Patricia was then-housekeeper at Arnold’s house. Arnold was married to Maria Shriver and Patricia was married to Rogelio de Jesus at the time. They had a secret affair together that led to the birth of Joseph Baena. However, the identity of Joseph was kept secret from Arnold and the rest of the world for over 7 years. His identity was made public after Arnold and Maria separated. As he grew up, he looked like Arnold, which is when Arnold realized the son of the housekeeper is actually the result of their secret affair. A few months after his birth, Baena and her then-husband Rogelio separated, whereas Arnold and his wife separated in 2011. Rogelio claimed that Joseph’s birth certificate was initially falsified.

His father bought a new house for him and his mother to live in Bakersfield, California in 2010. After Arnold came to realize about his son from his housekeeper, Patricia, he took all the financial responsibilities of Joseph “from the start and continued to provide support”. Arnold has formed a close father-son bond since then. Joseph has frequently shared his father-son engaged activities on his Instagram account.

Joseph Baena has a number of siblings from both sides. He has four half-siblings, Katherine Schwarzenegger, Christina Schwarzenegger, Patrick Schwarzenegger, and Christopher, who was born to Maria Shriver, whereas he has a half-sister, Jackie Rozo from his mother.

Joseph Baena has followed the footsteps of his father, Arnold. Both as an actor and as a bodybuilder, he has already stepped into the entertainment industry. He already has some credited appearances on the screen. His recent role in the recreation of an iconic scene from Terminator 2 earned him popularity. His movie credits include Wapakman, Aswang, and Shake Rattle and Roll Fourteen: The Invasion.

Joseph Baena is unmarried but is in a relationship with Savannah Wix. She is the beauty pageant holder of Miss Malibu 2018 and Miss Arizona USA as well. They reportedly started their affair in 2017. However, it appears as they may have split in mid-2018. He owns a large property in California, bought by his father. He lives with her mother there.

The son of Arnold, Joseph Baena stands at a height of 1.86 m i.e. 6 feet and 1 inch tall. His body weight is currently unavailable. He has an athletic body build. He is passionate about bodybuilding has followed the legacy set by his father. He has blue eyes and his hair color is brown.

The net worth of Joseph Baena is currently available. However, he is the son of popular actor and politician. His father must have arranged a reasonable fortune for him. He was also featured in magazines occasionally.

Our contents are created by fans, if you have any problems of Joseph Baena Net Worth, Salary, Relationship Status, Married Date, Age, Height, Ethnicity, Nationality, Weight, mail us at [email protected]