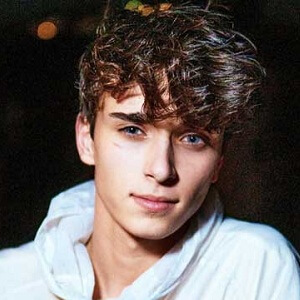 Josh Richards is an actor, model, and internet celebrity from Canada.  After gaining prominence as a social media influencer, he is set to star in several upcoming films. With Josh being a huge social media star, he’s also a member of The Sway House which is an all-male creator collective based in LA.

TikTok has helped Josh grab huge opportunities in the entertainment industry. Josh made his breakthrough in the 2018 movie Brother’s Keeper and Summertime Dropouts.

When was Josh Richards born?

Josh Richards was born on January 31, 2002, in Ontario, Canada. As of 2020, his age is 20. The internet doesn’t contain a lot about Josh Richard’s family, he grew up with his siblings Olivia Richards and William Richards.

As shown on social media, he is close to his parents and siblings and often uploads pictures and videos of his family members.

How did Richards pursue his career?

Josh Richards was always interested in acting from a very small age. Later it inspired him to pursue a career in the entertainment world. He started his career through social media platforms in 2017 where he first uploaded his picture on Instagram in July 2017. This led him to gather about 3.4 million-plus followers on Instagram. Besides his modeling career and Tik Tok career, he has made appearances in the movies Brother’s Keeper and Summertime Dropouts.

However, he gained most of his fame from TikTok videos, where he uploads lip-sync videos. He has eventually set up his own YouTube channel and till now has gained over 537k subscribers for his great content.

Is Josh Richards dating anyone?

Josh Richards is currently dating his girlfriend Nessa Barett who is a fellow TikTok star as well. Previously, fan thoughts that Richards was gay as he was seen fooling around with the boys in The Sway House.

Later he denied the rumor on January 18th, 2020 by disclosing his relationship with Nessa Barett.

What is the Net Worth of Josh Richards?

Josh started his career in the glamour world from a very small age. Josh has worked in several movies and enjoys his life as a social media personality where many people adore him for his creativity.

It’s no surprise that he earns a decent amount of income from his profession. His income from TikTok posts, merchandise, and endorsement have an estimated net worth of $350,000-$475,000.

How tall is Josh Richards?

Josh stands tall at a proper height of 5 feet and 11 inches. He tends to maintain a slim and fit body. He has an athletic body type. He has brown hair which enhances his beauty and suits his fair complexion. Similarly, he has pretty gray eyes.

Josh is very active in his Social Media accounts. On Instagram, he goes by the username @joshrichards with over 6.6 million followers, and he is a crowned user of TikTok as of May 2019 carrying over20.4 million followers.

Our contents are created by fans, if you have any problems of Josh Richards Net Worth, Salary, Relationship Status, Married Date, Age, Height, Ethnicity, Nationality, Weight, mail us at [email protected]