Julia Scarlett Elizabeth Louis-Dreyfus Hall is an American actress, comedian, singer and producer. She is known for her work in the television comedy series Saturday Night Live, Seinfeld, The New Adventures of Old Christine, and Veep. 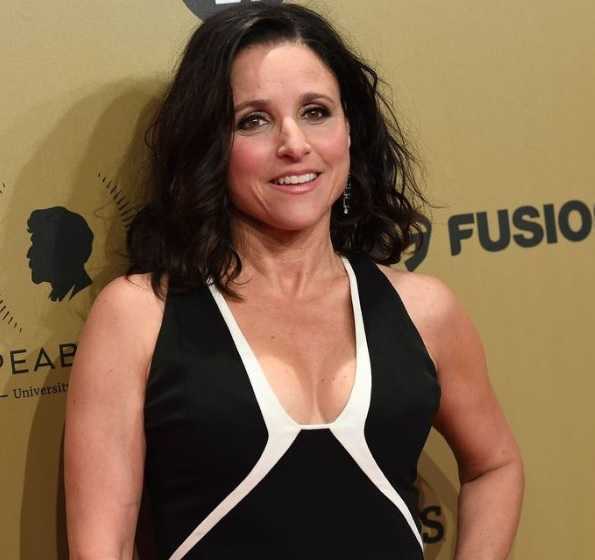 Julia is the first actress to win “Emmy Awards” for three different series: ‘Seinfeld’, ‘The New Adventures of Old Christine’, and ‘Veep’.

Louis is among the most top 100 influential strong women in the world who faced cancer, struggled, and finally survived.

What is Julia Louis-Dreyfus Famous For?

Julia, an American actress is famous for her iconic role in the series for which she set a record for most “Emmy wins” for a single same role.

She is also known for being cast as Elaine Benes in the NBC series “Seinfeld” and playing the lead role in the CBC television sitcom, “The New Adventures of Old Christine”.

Who are Julia Louis-Dreyfus’s Parents and Family?

How was Julia’s Early Life?

The 58 aged actress Julia comes from a wealthy family with a French Jewish heritage. Julia’s nationality is American with Capricorn as her zodiac sign. Her ethnicity is white and Protestant as her religion.

Julia has Ashkenazi Jewish descent on her paternal grandfather’s side. Louis-Dreyfus, a native of New York City had to move to Washington DC, spending her youth dividing her time between the homes of her parents, who divorced when she was a toddler.

Louis-Dreyfus got educated at a private girls’ school, the “Holton-Arms School”, in Bethesda, Maryland. After her graduation from high school in 1979, at the age of 18, Louis-Dreyfus entered “Northwestern University” in Evanston, Illinois. She studied drama but, decided to drop out before graduating and became involved in the Practical Theatre Co., led by actor Brad Hall.

In 1982, with help from leaders of the legendary Second City comedy troupe, the Practical Theatre opened a performance space in Chicago where Louis-Dreyfus, Brad Hall, and two others, Gary Kroeger and Paul Barrosse, began performing improvisational comedy.

Their first show opened in July 1982 and received rave reviews. They were soon scouted by Dick Ebersol, the producer of NBC’s Saturday Night Live (SNL), and all four cast members were hired. Louis-Dreyfus, at age 21, left Northwestern and moved to New York City.

How is Julia’s Career

In 1989 a former SNL colleague, Larry David, invited Louis-Dreyfus to audition for a new sitcom that he was developing with comedian Jerry Seinfeld. Julia won the role of Jerry’s former girlfriend, Elaine Benes, in “Seinfeld” (1990–98) and, as part of the classic show, earned a place in TV history. In 1996 she won her first Emmy for outstanding supporting actress in a comedy series for that role.

She also made several films during that period, including Jack the Bear (1993) and Deconstructing Harry (1997). After Seinfeld ended, Louis-Dreyfus starred in the short-lived sitcom “Watching Ellie” (2002–2003). Her fortunes rose when she claimed the title role in “The New Adventures of Old Christine” (2006–2010) as a single mother, for which she won the 2006 “Emmy Award” for outstanding lead actress in a comedy series. In 2010 Louis-Dreyfus earned a star on “Hollywood’s Walk of Fame”.

In 2012 she began a successful run as U.S. Vice President (later President) Selina Meyer on the comedy series “Veep”. Her work on that show cemented her status as one of the leading comic actors in the United States and won her six consecutive “Emmy Awards” for outstanding lead actress in a comedy series. In 2017 she tied a record for most Emmy wins (eight) by a performer.

More to that, Julia has voiced roles in animated films, including ‘A Bug’s Life’ and ‘Planes’. She also lent her voice on an episode of ‘The Simpsons’, titled ‘A Hunka Hunka Burns in Love’. Beyond that, she has appeared in various movies including, ‘Father’s Day’, ‘Troll’, ‘Hannah and Her Sisters’, ‘Deconstructing Harry’, ‘Enough Said’, and ‘National Lampoon’s Christmas’.

In September 2017, Julia announced the world of her breast cancer diagnosis via Twitter. The diagnosis came a day after she clenched a Primetime “Emmy Award for Outstanding Lead Actress in a Comedy Series” for her performance in “Veep”.

She took the platform to raise awareness about the disease while demanding affordable healthcare for all. A year after her cancer reveal, in October 2018, the Seinfeld actress, Julia announced that she was cancer-free in a sit down with Jimmy Kimmel.

Who is Julia Louis-Dreyfus’s Husband?

Julia Louis-Dreyfus is married to Brad Hall in 1987. Julia and her husband Brad Hall crossed paths during their time at the Northwestern University in Evanston, Illinois. The two are the only married couple in SNL’s history to appear on the variety show.

After working together in the 1986 film Troll, the Veep actress stayed with acting while her then-boyfriend Brad shifted his focus on TV production.

Five years later, after the marriage, the pair welcomed their first child Henry Hall. And then in 1997, the family grew to four after she gave birth to her second baby Charles Hall.

After 31 years of a long marriage, the couple Julia and Brad are yet to divorce scare.

The hilarious actress Julia Louis-Dreyfus not only has a vivacious and electrifying smile but also has a superb eye-capturing figure. The ageless beauty has killer abs and fab curves.

and shoe size of 7.5 (US). She has hazel eyes with black short hair.

What is Julia’s Net Worth?

The famous actress Julia Louis-Dreyfus has an estimated net worth of $220 million as of 2019. With Seinfeld, she appeared in the entire 9 seasons of the show which ran from 1989-1998, and reportedly received $600,000 per episode in the show’s final season.

The show is currently syndicated all over the world and Julia continues to receive royalties.‘The New Adventures of Old Christine’ series which debuted with an audience of 15 million also became hugely successful and ran for 5 seasons.

Her stupendous wealth of $200 million makes her the 5th Highest-Paid Actresses of all time.

Our contents are created by fans, if you have any problems of Julia Louis-Dreyfus Net Worth, Salary, Relationship Status, Married Date, Age, Height, Ethnicity, Nationality, Weight, mail us at [email protected]