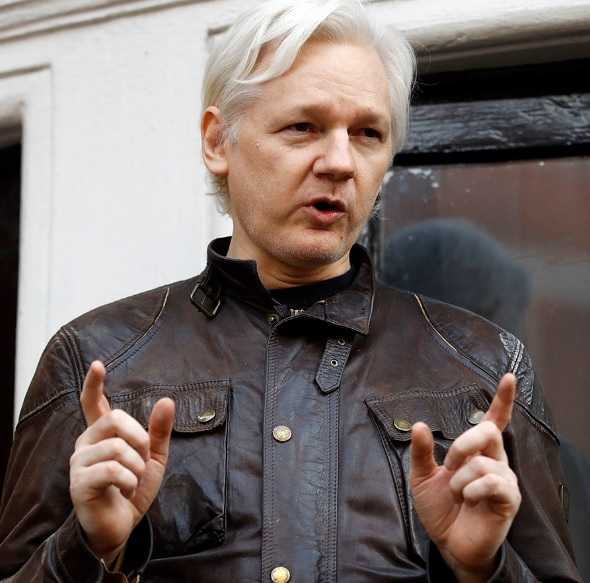 Every time we witness an injustice and do not act, we train our character to be passive in its presence and thereby eventually lose all ability to defend ourselves and those we love. In a modern economy it is impossible to seal oneself off from injustice

Capable, generous men do not create victims, they nurture victims

Courage is not the absence of fear. Only fools have no fear. Rather, courage is the intellectual mastery of fear by understanding the true risks and opportunities of the situation and keeping those things in balance

Julian Paul Hawkins popularly known as Julian Assange or Julian Paul Assange is an Australian computer programmer and journalist. He is the founder and director of WikiLeaks. He found WikiLeaks in 2006. He rose to prominence in 2010 when WikiLeaks published a series of leaks including the Collateral Murder video, the Afghanistan war logs, the Iraq war logs, and Cablegate. The federal government of the United States launched a criminal investigation into WikiLeaks following the 2010 leaks and asked allied nations for assistance. He had been living in the Ecuadorian Embassy in London under the protection of Ecuador since 2012. He was arrested on 11 April 2019 by the Metropolitan Police Service for breaching his bail conditions in December 2010.

Founder and Director of WikiLeaks, Julian Assange was arrested on 11 April 2019 by the Metropolitan Police from the Ecuador embassy. Ecuador provided political asylum to Assange in 2012 granted the Metropolitan Police permission to arrest him. He was arrested for breaching his bail conditions in December 2010. He was avoiding extradition to Sweden over a sexual assault case that has since been dropped.

The Eastern District of Virginia grand jury unsealed an indictment against him on the same day of his arrest charging him with conspiracy to commit computer intrusion. If proven guilty, he would be sentenced to 5-years in prison.

What is Julian Assange Known For?

– Founder and director of WikiLeaks.

Where was Julian Assange Born?

Julian Assange was born on 3 July 1971. His birth name is Julian Paul Hawkins. He was born to a father, John Shipton, and a mother, Christine Ann Hawkins. His birthplace is in Townsville, Queensland, Australia. He holds Australian and Ecuadorian nationality. His zodiac sign is Cancer. He belongs to the White ethnicity. His parents separated before he was born. His mother married Richard Brett Assange when he was a year old. He has lived in over thirty Australian towns and cities by the time he reached his mid-teens. He finally settled with his mother and half-brother in Melbourne, Victoria.

He attended many schools including Goolmangar Primary School in New South Wales and Townsville State High School. He was homeschooled as well. He studied programming, mathematics, and physics at Central Queensland University and the University of Melbourne. He did not complete his degree.

He started hacking under the name Mendax in 1987. He and two others, known as “Trax” and “Prime Suspect” formed a hacking group called the International Subversives.

He is believed to be involved in the WANK (Worms Against Nuclear Killers) hack at NASA in 1989. He does not take the credit for WANK hack.

He was discovered hacking into the Melbourne master terminal of a Canadian multinational telecommunication corporation, Nortel in September 1991.

The Australian Federal Police tapped Assange’s phone line and raided his home at the end of October. He was charged with thirty-one counts of hacking and related crimes in 1994.

He pleaded guilty to 25 charges and the six other charges were dropped. He was ordered to pay reparations of A$2,100 and released on a good behavior bond.

He gave technical advice to the Victoria Police Child Exploitation Unit and assisted with prosecutions in 1993.

He was involved in starting one of the first public Internet service providers in Australia, Suburbia Public Access Network in 1993.

In 1994, he started programming and in 1995 he started authoring or co-authoring the TCP port scanner Strobe, patches to the open-source database PostgreSQL and the Usenet caching software NNTPCache, both in 1996, the Rubber hose deniable encryption system in 1997, and a command-line interface for web-based search engines, Surfraw in 2000.

He also moderated the AUCRYPTO forum, ran Best of Security, and contributed research to Suelette Dreyfus’s Underground during this period.

He co-founded the company Earthmen Technology in 1998.

He stated that he registered the domain leaks.org in 1999. He publicizes a patent granted to the National Security Agency in August 1999 for voice-data harvesting technology.

Assange and other established WikiLeaks in 2006. He is a member of the organization’s advisory board and describes himself as the editor-in-chief.

He traveled continuously on WikiLeaks business, visiting Africa, Asia, Europe, and North America from 2007 to 2010.

WikiLeaks earned international recognition after it published a highly secret series of leaks including the Collateral Murder video, the Afghanistan war logs, the Iraq war logs, and Cablegate, supplied by Chelsea Manning.

By 2015, WikiLeaks had published more than 10 million documents and associated analyses.

Australian Prime Minister Julia Gillard described his activities as “illegal” but the police said that he had broken no Australian law. United States Vice President Joe Biden and others called him a “terrorist”.

A deal for his autobiography worth at least US$1.3 million.

Italian edition of Rolling Stone selected him as “rockstar of the year”.

He announced that he would run for the Australian Senate in March 2012 under the new WikiLeaks Party, and Cypherpunks was published in November.

He hosted a television show on the network funded by the Russian government, RT in 2012.

He analyzed the Kissinger cables held at the US National Archives and released them in the searchable form in 2012.

He won the Sydney Peace Foundation Gold Medal for Peace with Justice in February 2015. It was previously awarded to only three people, Nelson Mandela, the Dalai Lama, and Buddhist spiritual leader Daisaku Ikeda.

He filed for the trademark “Julian Assange” in Europe in February 2015. It was to be used for “Public speaking services, news reporter services, journalism, the publication of texts other than publicity texts, education services, entertainment services.”

He was awarded the Martha Gellhorn Prize for Journalism in June 2015. Earlier, he won the Amnesty International UK Media Award (New Media) in 2009.

Political Asylum at the Ecuadorian Embassy

Patino announced in August 2012 that Ecuador was granting Assange political asylum because of the threat represented by the US secret investigation against him. Ecuadorian President Rafael Correa confirmed on 18 August 2012 that Assange could stay at the embassy indefinitely. Assange gave his first speech from the balcony on 19 August 2012. The Metropolitan Police Service was stationed outside the building from June 2012 to October 2015 in order to arrest Assange if he leaves the embassy.

He also sought asylum in France. But France denied the asylum. He said in September 2016 that he would agree to US prison in exchange for President Obama granting Chelsea Manning clemency. Obama commuted Manning’s sentence on 17 January 2017. He demanded Chelsea be released immediately. Manning was released from prison on 17 May 2017 but did not meet Assange’s conditions. He emerged on the embassy’s balcony on 19 May 2017 and announced that he would remain inside the embassy in order to avoid extradition to the US.

Ecuador’s president Lenin Moreno stated in April 2019 that Assange had violated the terms of his asylum after photos surfaced on the internet linking Moreno to a corruption scandal. WikiLeaks denied that it had acquired any of the published material and stated that it merely reported on a corruption investigation against More by Ecuador’s legislature. WikiLeaks subsequently wrote on Twitter that according to a source within the Ecuadorian government, an agreement had been reached to expel Assange from the Ecuadorian embassy and place him in the custody of UK police.

United States authorities started investigating WikiLeaks and Assange personally with a view to prosecuting them under the Espionage Act of 1917.

An email from an employee of intelligence consultancy Strategic Forecasting, Inc. (Stratfor) leaked in 2012 said, “We have a sealed indictment on Assange.” The US government denies the existence of such an indictment.

Prosecutors in the Chelsea Manning revealed the existence of chat logs between Manning and an alleged WikiLeaks interlocutor they claimed to be Assange in December 2011. Assange denied this stating it “absolute nonsense”.

Several government agencies separately examined Assange. Courts documents published in May 2014 suggest that Assange was still under “active and ongoing” investigation at that time.

Some Snowden documents published in 2014 show that the US government put Assange on the “2010 Manhunting Timeline”. They also urged their allies to open criminal investigations into the editor-in-chief of WikiLeaks. In the same documents, there was a proposal by the National Security Agency (NSA) to designate WikiLeaks as a “malicious foreign actor”.

WikiLeaks reported in January 2015 that three members of the organization had received notice from Google that Google had complied with a federal warrant by a US District Court to turn over their emails and metadata on April 2012.

US officials told CNN in April 2017 that they were preparing to file formal charges against Assange.

US prosecutors accidentally revealed the existence of criminal charges against Assange in an unrelated ongoing sex crime case in the Eastern District of Virginia.

Assange visited Sweden in August 2010. He became the subject of sexual assault allegations. Two women alleged Assange sexually assaulted them. The case was initially closed and was told he could leave the country. The special prosecutor re-opened the case in November 2010. Assange denied the allegations. He was interviewed by Swedish prosecutors online in November 2016. The interviews were published online. The Swedish authorities suspended their investigation against Assange in May 2017 claiming they could not expect the Ecuadorian Embassy to communicate reliably with Assange with respect to the case. Chief prosecutor Marianne Ny officially revoked his arrest warrant but said the investigation could still be resumed if Assange visited Sweden before August 2020.

The Metropolitan Police arrested Assange on 11 April 2019. Ecuadorian authorities had invited the Metropolitan Police into the embassy. He was arrested in connection with his failure to surrender to the court in June 2012 for extradition to Sweden. Ecuadorian president Lenin Moreno stated that Ecuador withdrew Assange’s asylum after he repeatedly violated international conventions regarding domestic interference. He was found guilty of breaching his bail conditions later that afternoon.

An indictment against Assange from the grand jury for the Eastern District of Virginia was unsealed on the same day. He was charged with conspiracy to commit computer intrusion.

2010 Le Monde Readers’ Choice Award for Person of the Year

Who is Julian Assange Married to?

He first married Teresa Doe in his teens. They got married in 1989. The couple shares a son, Daniel Assange. The couple got divorced in 1999.

He has stated in an open letter to then-French President Francois Hollande that his youngest child lives in France with his mother.

What are Julian Assange’s Body Measurements?

What is Julian Assange’s Net Worth?

Julian Assange is the founder of WikiLeaks that published confidential documents all around the globe. His net worth is estimated at $1 million.

Our contents are created by fans, if you have any problems of Julian Assange Net Worth, Salary, Relationship Status, Married Date, Age, Height, Ethnicity, Nationality, Weight, mail us at [email protected]