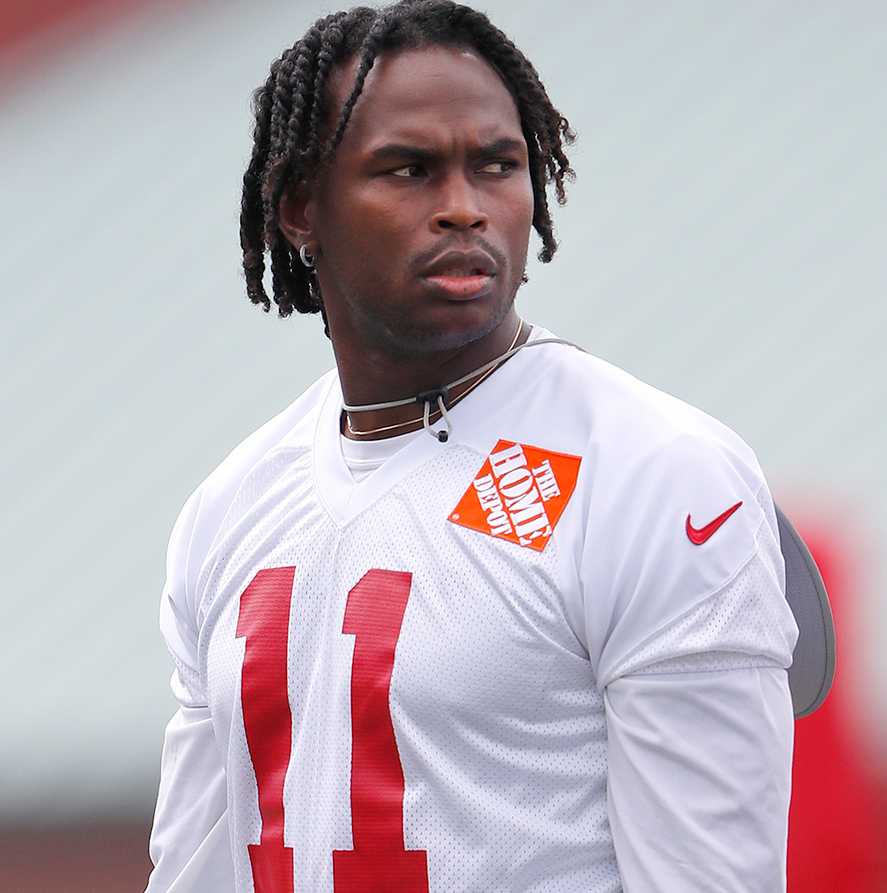 Quintorris Lopez Jones, professionally known as Julio Jones is an American football player. He plays as a wide receiver for the Atlanta Falcons of the NFL. The Falcons drafted him sixth overall in the 2011 NFL Draft. He helped the Falcon to reach Super Bowl LI, where they lost to the New England Patriots. He has been named to Pro Bowl six times. He played college football at the University of Alabama.

What is Julio Jones Famous For?

Where was Julio Jones Born?

Julio Jones was born on 8 February 1989. His birth name is Quintorris Lopez Jones. His birth place is in Foley, Alabama in the United States. He holds American nationality. His mother is Queen Marvin. His father left the family when he was 5 years old. He has a brother, Phillip. He belongs to Black ethnicity.

He attended Foley High School in Foley, Alabama. He played wide receiver and defensive end for the Lions high school football team. Besides football, he was a starter on the basketball team. He was also a standout track athlete. He was the state champion in the long jump and triple jump in both 2006 and 2007. He was the state champion in the high jump during the 2007 indoor season. He was named All-county selection in 2005, 2006, and 2007. He also competed as a sprinter in 2008.

Rivals.com rated Jones as a five-star recruit and was listed as the No. 1 wide receiver in the nation in 2008. After high school, he committed to play for the University of Alabama.

He became the first true freshman wide receiver to start in a season opener for the Crimson Tide.

He finished his freshman regular season with 58 receptions, 924 yards, and 4 touchdowns.

He was named SEC Freshman of the Year in 2008 and was named to Second-team All-SEC as well.

He was voted to All-SEC Coaches’ Football Team (First team).

He finished his sophomore year with 43 receptions, 596 yards, and 4 touchdowns in a regular season.

He finished his junior regular season with record 78 receptions, 1,133 yards, and 7 touchdowns.

He played his final Crimson Tide game in the 2011 Capital One Bowl against Michigan State.

He decided to forego his senior season to enter the 2011 NFL Draft.

The Atlanta Falcons selected Jones with the 6th pick in the 1st round of the 2011 NFL Draft.

He made his NFL debut against the Chicago Bears at Soldier Field.

He was named to the NFL All-Rookie Team for the 2011 season.

He made his playoff debut against the New York Giants.

He finished his second season with 79 receptions, 1,198 yards, and 10 touchdowns.

The Falcons went on to lose to the San Francisco 49ers in the NFC Championship.

He was named to his career-first Pro Bowl following his successful 2012 season.

He sustained foot injury in the Week 4 game against the New York Jets in October 2013. The fracture on his foot kept Jones out for the rest of the season.

His 1,871 yards in the 2015 season became a Franchise record and the second-highest in NFL history.

The Falcons defeated Seahawks in the Divisional Round and Green Bay Packers in the NFC Championship to reach the Super Bowl LI.

The Falcons lost Super Bowl LI to the New England Patriots in overtime by a score of 34-28.

Who is Julio Jones Married to?

What are Julio Jones Body Measurements?

What is Julio Jones Net Worth?

Julio Jones earns from his professional football career. He has been playing for the Atlanta Falcons since he was drafted by the Falcons in the 2011 NFL Draft. He extended his contract with the Falcons in August 2015 for $71.5 million. He had previously signed a $16.2 million rookie contract with the Falcons when he was drafted. His annual salary is reported at $14.1 million. His net worth is estimated at $25 million at present.

Our contents are created by fans, if you have any problems of Julio Jones Net Worth, Salary, Relationship Status, Married Date, Age, Height, Ethnicity, Nationality, Weight, mail us at [email protected]